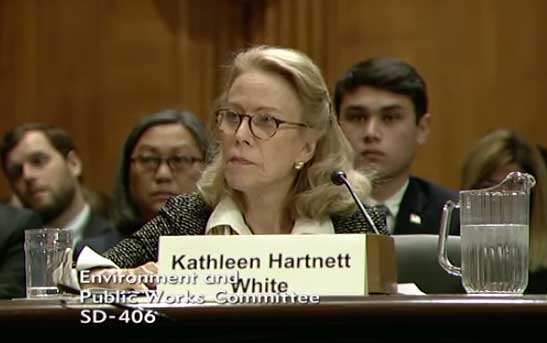 The full senate vote to appoint Kathleen Hartnett White to the position of head the Council on Environmental Quality is soon coming up. The committee vote yesterday (Nov 29th) has endorsed her, so it is just the full vote in the senate that remains. She is of course the ideal Trump environmental appointee – from her viewpoint CO2 is not a problem at all and instead is very good for plants, hence we need lots of it. The essence of her stance is that CO2 is the “Gas of Life” and so she wants to brush aside concerns about CO2 and see the US expand its use of fossil fuels because from her viewpoint CO2 is not a problem.

From Trump’s viewpoint she is the perfect fit for the Council on Environmental Quality, and yet from the sidelines most normal rational people see yet another incompetent, ignorant, and highly compromised buffoon, being appointed.

Her Stance is a matter of public record

She co-authored a book entitled “Fueling Freedom: Exposing the Mad War on Energy“. The stance here is that if fossil fuel energy is supplanted by “green” alternatives, humanity will take a giant step backwards and the planet will be less safe, less clean, and less free … which is all fine except of course for one niggling tiny little problem; none of it is actually true or ever rational.

When interviewed by the Orlando Sentinel last Oct, she clearly laid out her “Gas of life” stance …

CO2 is often called the “gas of life” because it makes photosynthesis possible — the most essential energy conversion on which all life on the Earth depends. An invisible, harmless trace gas in the Earth’s atmosphere, CO2 is a plant food.

There is more, lots more, and it all points right back to the oil and gas industry flexing its financial clout. As reported here …

As a fellow of the conservative Austin-based think tank, the Texas Public Policy Foundation, White leaves a long paper trail that will surely be fodder for her confirmation hearing. The group has been funded by fossil fuel interests, including Exxon and the Koch brothers.

She has decried regulation of carbon dioxide, which she calls “the gas of life,” and co-authored last year’s paean to the fracking boom, “Fueling Freedom: Exposing the Mad War on Energy.” Her co-author, economist Stephen Moore, founded the Club for Growth, the political action group that weaponized the primary process to successfully move the Republican party to the right over the past two decades.

… In her 2014 monograph, “Fossil Fuels: The Moral Case,” she wrote: “Humanity’s use of fossil fuels has released whole populations from abject poverty. … Until energy sources fully comparable or superior to fossil fuels are securely available, policies to reduce emissions of CO2 should proceed with caution lest they prematurely exhaust the well-springs of mankind’s greatest advance.”

She has also promoted tactics for undermining the Endangered Species Act, claiming its protections for endangered wildlife imperil prosperity.

During her senate confirmation hearing she left many observers thinking WTF! …

If you watch the above link then you will be able to gasp in awe as she states to the committee that she knows nothing about ocean dynamics, climate change or even the thermal expansion of water, and confirmed that her actual understanding of the issues was “superficial”, and that she had “not read widely or deeply” on the topic. Gaze in wonder upon her assertion (yet again) that CO2 “is a plant nutrient”, and not a problem at all.

Clearly she is the ideal perfect GOP candidate because she happily admits to being completely and utterly ignorant of the actual issues. With such an assurance bringing the full clarity that she will fit right in, they quite naturally formally approved her nomination for a full senate vote.

Opposition to her appointment

After listening to the above idiocracy incarnate, Amanda Lynch, a climate scientist at Brown University and head of the Institute at Brown for Environment and Society, drafted a letter, collected signatures, then sent it to the senate last Tuesday (28th Nov). Here is that letter …

We, the undersigned, oppose the nomination of Kathleen Hartnett White to run the White House Council on Environmental Quality, because one thing more dangerous than climate change is lying.

As scientists and scholars, we are alarmed by Ms. Hartnett White’s actions and statements, particularly, her recent assertion that carbon dioxide is not a harmful pollutant. There is unanimous agreement across peer – reviewed climate science that carbon dioxide and other greenhouse gases released by human activities are contributing to the harmful effects of climate change. To state otherwise in the face of overwhelming evidence is simply unsupportable. This is not a partisan issue; it is a matter of defending scientific integrity. Climate change threatens us all, regardless of political affiliation. Confirming Kathleen Hartnett White at the helm of the Council on Environmental Quality would have serious consequences for people and the ecosystems of the only planet that can support us .

When the scientific community clearly and decisively tells you that a nominee is utterly incompetent and wholly inappropriate then you might think that it would perhaps give them some pause.

When a nominee happily confirms the criticism directed against her, then you truly do have to wonder would be sufficient for them to not endorse a candidate.

Rather obviously this was a GOP party line vote where facts, reality, and the best interests of the nation don’t matter, so they happily approved her nomination.

Will the full senate vote finalise her appointment?

Perhaps … but until they do, then permit me the luxury of retaining a bit of hope that they might not.

There is one small observation here that does give some merit to such a hope. Nobody knows when her nomination will be considered by the full Senate, because no date has been set. We are starting to see a bit of a pattern here. Susan Combs, was nominated to the Department of Interior, and yet has been waiting for more than 140 days to be confirmed by a full senate vote. It is tempting to look upon this neglect for a full vote as a quiet common sense hidden rebellion against such candidates, but no, this generally tends to be procedural shenanigans in play as various senators put holds in place to gain leverage for other interests.

Quote of the day

Not everybody on the committee went along with it all …

Side Note: With a senator having a name like that you do have to wonder if he would even consider a presidential run.