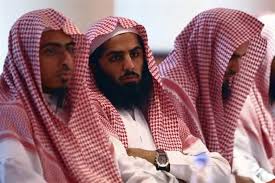 Much to my complete surprise, I came across a report that describes how the Saudi Religious Police are being trained in how to identify and stamp out magic.

Seriously, they really are …

Saudi Arabia’s influential religious police have started training its new members on how to fight magic and arrest those involved in black art in the Gulf Kingdom.

Newspapers said 30 members of the Commission for the Promotion of Virtue and Prevention of Vice have completed a five-day course on combating magic at the Commission’s headquarters in the capital Riyadh.

They said the course covered theoretical and practical lessons on how to deal with magic, destroy black art work and identify magicians and sorcerers.

It sounds laughable, and of course it is, but the fact that they truly believe it to be quite real has resulted in some rather dire outcomes. If you get accused and found guilty, then they chop off your head.

This is not theory, they really do it, as reported by the BBC …

A Saudi man has been beheaded on charges of sorcery and witchcraft, the state news agency SPA says.

The man, Muree bin Ali bin Issa al-Asiri, was found in possession of books and talismans

… and here is a story about a supposed witch  …

An accused witch, Amina bint Abdulhalim Nassar, was beheaded in Saudi Arabia earlier this week. She had been convicted of practicing “witchcraft and sorcery,” according to the Saudi Interior Ministry. Such a crime is a capital offense in Saudi Arabia, and so Nassar was sentenced to death. Nassar’s sentence was appealed — and upheld — by the Saudi Supreme Judicial Council.

Nassar, who claimed to be a healer and mystic, was arrested after authorities reportedly found a variety of occult items in her possession, including herbs, glass bottles of “an unknown liquid used for sorcery,”

If you start with a social foundation that firmly rests upon superstition, then this is the inevitable outcome. Not too long ago in our own history something similar took place for very similar reasons, and it is still bubbling away within many strands of belief for there you will often find a truly sincere acceptance of such thinking as the norm. I vividly recall doing my religious phase a very well-respected church elder advising that new each and every church there is usually a coven or witches. This was a group led by a chap who was also rather fond of casting out demons and could manage to always put of a good show, lots of “In the Name I Jesus I cast you out” incantations, and also some screaming and falling over (those of us who happen to now live in the 21st century call that emotional hysteria).

Bottom Line: The house of Saudi might indeed be gripped by fear and superstition, and that has a real measurable impact – innocent people die. But we should not forget that this was us not too far back in history. And while such thinking still exists, we as a society are now free from it all, and so too can they be, they need not be gripped by a fear of things that do not actually exist at all.