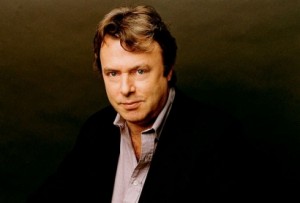 We knew this day was coming and could not be avoided, and yet perhaps we also all hoped for it to be postponed for a lot longer, and so having clutched that hope, today’s news was indeed one of sorrow.

Many have written much, and so I shall simply point out some of the best …

Finally, here are a few quotes from Christopher that I though you might enjoy reading …

“[George W Bush] is lucky to be governor of Texas. He is unusually incurious, abnormally unintelligent, amazingly inarticulate, fantastically uncultured, extraordinarily uneducated, and apparently quite proud of all these things.” – Hardball with Chris Matthews, NBC, 2000

“‘Bombing Afghanistan back into the Stone Age’ was quite a favourite headline for some wobbly liberals. The slogan does all the work. But an instant’s thought shows that Afghanistan is being, if anything, bombed OUT of the Stone Age.” – Daily Mirror, November 2001

“The noble title of ‘dissident’ must be earned rather than claimed; it connotes sacrifice and risk rather than mere disagreement …”

“Do bear in mind that the cynics have a point, of a sort, when they speak of the ‘professional naysayer’.” “To be in opposition is not to be a nihilist. And there is no decent or charted way of making a living at it. It is something you are, and not something you do.” – Letters to a Young Contrarian, 2001

“[Mother Teresa] was not a friend of the poor. She was a friend of poverty. She said that suffering was a gift from God. She spent her life opposing the only known cure for poverty, which is the empowerment of women and the emancipation of them from a livestock version of compulsory reproduction.” – Slate, October 2003

“The search for nirvana, like the search for utopia or the end of history or the classless society, is ultimately a futile and dangerous one. It involves, if it does not necessitate, the sleep of reason. There is no escape from anxiety and struggle.” – Love, Poverty, and War: Journeys and Essays, 2004

“Those who had alleged that a million civilians were dying from sanctions were willing, nay eager, to keep those same murderous sanctions if it meant preserving Saddam!” – The Weekly Standard, May 2005.

“The Bible may, indeed does, contain a warrant for trafficking in humans, for ethnic cleansing, for slavery, for bride-price, and for indiscriminate massacre, but we are not bound by any of it because it was put together by crude, uncultured human mammals.” – God is Not Great: How Religion Poisons Everything, 2007

“My own view is that this planet is used as a penal colony, lunatic asylum and dumping ground by a superior civilisation, to get rid of the undesirable and unfit. I can’t prove it, but you can’t disprove it either.” – God Is Not Great

“The only position that leaves me with no cognitive dissonance is atheism. It is not a creed. Death is certain, replacing both the siren-song of Paradise and the dread of Hell. Life on this earth, with all its mystery and beauty and pain, is then to be lived far more intensely: we stumble and get up, we are sad, confident, insecure, feel loneliness and joy and love. There is nothing more; but I want nothing more.” – The Portable Atheist: Essential Readings for the Non-Believer, 2007

“I became a journalist partly so that I wouldn’t ever have to rely on the press for my information.” – Hitch-22, 2010

We have lost our sharpest wit, one of our finest writers and one of our best minds. There are no false consolations to be had. Only the truth that from now on, instead of knowing what Christopher thinks, we will have to consider what he would have thought. We will, in other words, have to think for ourselves. If we manage it then, in large part, it will be thanks to Christopher and the incomparable example – in life and work – that he provided.

The #GodIsNotGreat hash tag on twitter started trending as a tribute to Hitchens (its the title of his book). Moronically stupid christians started taking offense and not only complained but started tweeting death threats (that in itself tells you all you need to know about their delusional beliefs). In response Twitter pulled it from the trend lists. Apparent other tags such as #ReasonsToBeatYourGirlfriend are allowed … go figure.

1 thought on “Christopher Hitchens is gone”