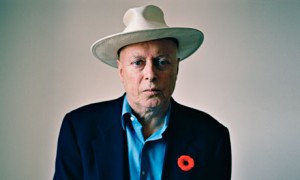 In June Christopher Hitchens, the hard-drinking polemicist and atheist, met his toughest opponent yet when he was diagnosed with cancer. The question on many lips was: would his illness alter his beliefs – on Iraq, on Islam, on God? At home in Washington, with a large glass of Johnnie Walker to hand, he responds with characteristic combativeness

… His beef, in any event, is not really against faith itself, but against the way that all faiths are compelled to make irrational demands on believers and non-believers alike.

…Hitchens dislikes the “New Atheist” title. “It isn’t really new,” he says, “except it coincides with huge advances made in the natural sciences. And there’s been an unusually violent challenge to pluralist values by the supporters of at least one monotheism apologised for quite often by the sympathisers of others. Then they say we’re fundamentalists. A stupid idea like that is hard to kill because any moron can learn it in 10 seconds and repeat it as if for the first time. But since there isn’t a single position that any of us holds on anything that depends upon an assertion that can’t be challenged, I guess that will die out or they’ll get bored of it.” As for the notion that his brand of atheism is reductive or joyless, it’s religion, he contests, that is “cosmically hopeless, as is all the related masochism that goes with it – you’ve got to spend your entire life making up for the vermin you are. What is that if not degrading? We don’t do that to people. We say you may as well know you’re a primate, but take heart, primates are capable of great things.”

… Along the way, he says, “I learned that very often the most intolerant and narrow-minded people are the ones who congratulate themselves on their tolerance and open-mindedness. Amazing. My conservative friends look at me and say, ‘Welcome to the club. What took you so long?’ Well that’s what it took and I think it’s worth recording.“

…Hitchens genuinely believes radical or jihadist Islam to be an existential threat to civilisation. First because it is a pronounced enemy of free speech and social liberty and has succeeded in intimidating and silencing civilians across “an extraordinary number of countries in Europe” and the rest of the world. And second, he says, “because it has potential access to weapons of mass destruction.” In the end, he argues, there are no pain-free options. You have to choose which future regret you’re going to have.

… His only major regret, as far as remaining silent goes, is what he didn’t say about Robert Mugabe. “That makes me wince. More than wince. I’d met him a couple of times and I knew that he had in him a terrible capacity for fanaticism, absolutism, and I didn’t say as much about that as I could have done. If I asked myself about why I didn’t, I’m sure the answer is because I didn’t want to give ammunition to the other side.”

… the political thinkers he most often references are also gifted writers: Orwell, Arthur Koestler, Thomas Paine, even Thomas Jefferson. The first two, like Hitchens, committed anti-totalitarians, and the second pair voices from the only revolution – the American – whose praises he continues to sing.

… “The best one can do is say that we’ve given the Iraqis the chance to produce a constitution, independent courts and a free press. They can keep it if they want but the parties of God may veto that. Unless we’re directly requested by a functioning government backed by a functioning parliamentary vote to stay on, we have to leave it to them now.”

… With Hitchens, though, the argument will continue, first with himself and then, if need be, with the world. His intemperate style is not to everyone’s tastes, but as he has often remarked, you can’t produce light without heat. To those of us who admire his clarity of thought, if not always his conclusions, it is indeed a lovely light. And I’m pleased to say that on a cold November day in Tumortown, it showed little sign of fading.

If you enjoyed these few brief snippets, then you might also like Andrew’s full article. If so, then you can read it in full by clicking here.