We have a new president, no not of the US, but instead for something far more important, the British Humanist Association (@BHAhumanists)

The previous president, Jim Al-Khalili, the theoretical physicist, author and broadcaster, will reach the end of his term as President of the British Humanist Association at the end of this year, and so it was time to announce who will next hold that role.

It will be Shappi Khorsandi (@ShappiKhorsandi), and she is a really fabulous choice. 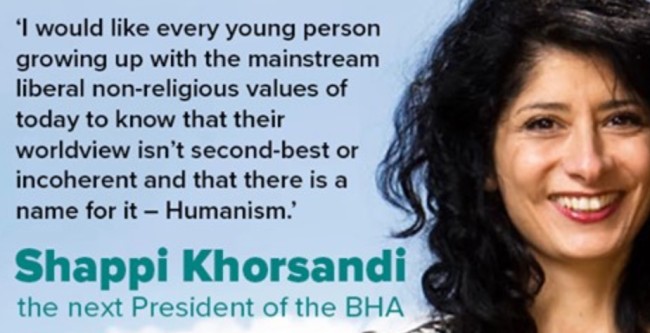 Broadcaster and comedian Shappi Khorsandi will succeed physicist Jim Al-Khalili as the President of the British Humanist Association (BHA), it has been announced. The twelfth President in the BHA’s history, and the fourth woman to take the role, Shappi will begin her three-year term as President in January 2016.

Born to non-religious parents in Iran, Shappi and her family fled to Britain in her youth after her father, the poet Hadi Khorsandi, was targeted for assassination by Ayatollah Khomeini’s regime after writing a satirical piece about the Islamic Revolution. Growing up in England, Shappi’s childhood was marked by recurrent fears of her father being assassinated, and the family spent time under police protection. Sharing her father’s talent for humour, she began a successful career in stand-up comedy after graduating from Winchester with a degree in drama, and has made numerous appearances on TV and radio comedy shows, including Live at the Apollo, Michael McIntyre’s Comedy Roadshow, Friday Night with Jonathan Ross, Have I Got News for You and QI.

A humanist all her adult life, Shappi was most recently one of several contributors to Michael Rosen and Annemarie Young’s new children’s book What is Humanism?, a project that is in keeping with her personal priority of having humanism better understood by young people in particular.

Announcing Shappi’s appointment, BHA Chief Executive Andrew Copson said, ‘It’s a great pleasure to welcome Shappi to the Presidency of the British Humanist Association. Our President must be able not just to communicate humanism clearly but to connect on an emotional level with those many people in Britain who have humanist beliefs but don’t know the word exists to describe them. As such a warm and accomplished broadcaster, not to mention an intimate commentator on the human experience in her standup and elsewhere, Shappi certainly has that ability in spades.’

Outgoing BHA President Jim Al-Khalili commented, ‘My Presidency has been great fun as well as a great privilege. Although I’m sad to be stepping down as President, I know that Shappi will do a fantastic job. She has all the talent and experience to embody all that is nurturing and life-affirming about the humanist perspective on life, which so many of us share.’

‘It’s a great honour to be selected to be the next President of the British Humanist Association. As someone who was raised in a non-religious family, I don’t just believe that human virtues such as love, compassion, generosity, and understanding can exist outside the realm of religion… I know it for a fact. This approach has been hugely fulfilling in my own life, and it’s the ethos behind everything the BHA does – whether campaigning for a pluralistic and cooperative society, offering pastoral care in hospitals, or providing meaningful non-religious ceremonies for baby-namings, funerals, and weddings.

‘I would like every young person growing up with the mainstream liberal non-religious values of today to know that their worldview isn’t second-best or incoherent and that there is a name for it – humanism. I’ve been as excited as everyone else to see the progress made in recent weeks to have the humanist perspective included in the school curriculum alongside religious beliefs and I can’t wait to see how that develops in my three years!

‘This humanist perspective is a profound and inspiring one – and it’s not just a modern perspective. Through the centuries and all around the world, people have looked to reason and to science in place of superstition and sought to make the most out of the one life they have. It’s crucial that this voice is heard. The BHA is consistent in its calls for a more tolerant, rational, and above all fairer society, and I hope that I can add to its influence as a positive movement for social change.’

Previous Presidents of the British Humanist Association have included jazz musician and author George Melly, agony aunt and broadcaster Claire Rayner, comedian and broadcaster Linda Smith, cosmologist Hermann Bondi, anthropologist Edmund Leach, and evolutionary biologist Julian Huxley. On stepping down as President, Jim Al-Khalili will join his predecessor, the journalist Polly Toynbee, and the moral philosopher A C Grayling, as a Vice President of the BHA.

Shappi Khorsandi has her own wWikipedia page, so you can read lots more about here there.

OK, you there are a few other pages also of interest, for example …

And if you are wondering what the BHA is all about, ah now that is an easy question. If you want to live a good live without recourse to either religious or superstitious beliefs, then these are the folks for you.

Are you a Humanist?

You might actually be a humanist and simply not know it. To enable you to find out there is a fun little quiz on the BHA website that you can have a go at and see. There is no plea for your email or any contact details, no need to login, you just start ticking boxes, and 10 questions later you get your answer.

1 thought on “A New President has been appointed for @BHAhumanists”