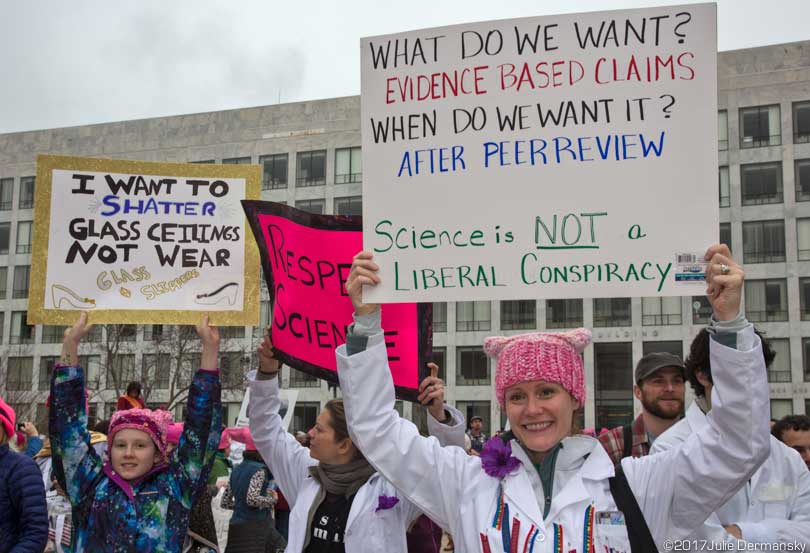 The underlying news is this …

More than 300 scientists have urged President Trump to withdraw from the U.N.’s climate change agency, warning that its push to curtail carbon dioxide threatens to exacerbate poverty without improving the environment.

In a Thursday letter to the president, MIT professor emeritus Richard Lindzen called on the United States and other nations to “change course on an outdated international agreement that targets minor greenhouse gases,” starting with carbon dioxide.

Wow, scientists said that, so it must be an important sciency thing and because they are scientists then we must not critically analyse what they are saying or look for any evidence for their claim, but instead we need to just listen and obey … right?

Yep, the sarcasm is indeed a pointer to where I am going with this.

Just who are these 300 ‘scientists’ telling Trump to burn the climate?

Dr John Abraham, an actual climate science subject matter expert, digs into all this by asking himself who these 300 are and what their precise expertise in climate science actually is.

Hint: Prepare to be completely and utterly unimpressed.

A retired geologist and a public servant? I performed a google scholar search on “AI Adam” to find out what is picked up as any studies written by someone named “AI Adam.” Nothing. If you can find his book on Amazon, you will see his biography states he’s a retired geologist, got a degree from a university in the UK (discipline not specified), he worked in fossil fuel and mineral industries in Australia and other countries. Oh, and currently he has “wide interests”.

Surely it gets better right? I mean this signer was an Associate Professor? Again, not much there. I was able to find this part of a biography on DeSmogBlog:

Ralph B. Alexander is a former Associate Professor of Physics at Wayne State University and former President and co-founder of Ion Surface Technology, a small high-tech materials company. He is currently the owner and president of R.B. Alexander & Associates Inc., an independent consulting firm specializing in advanced materials and surface engineering.

No evidence of any expertise in climate science that I could find. Let’s move to

Needless to say, the pattern persists. The expertise these folks have is about as appropriate as asking a doctor of philosophy to perform open heart surgery.

What about the chap who orchestrated all this, a Mr Lindzen?

He digs into him in detail as well …

how about the person who appeared to orchestrate this letter, Richard Lindzen? Well, he may be best known for taking contrarian views on climate change that are not substantiated by the research, and being wrong on all of them. In fact, he has put forward multiple studies that were shown to be incorrect or questionable by his colleagues in the field.

A summary that I coauthored of his work is available here with links to all of the relevant studies so people can read for themselves. In fact, one of his studies was rebutted by three separate papers within a year of publication. This is astonishing – most papers are never rebutted. In fact, I would venture that most scientists never have a paper rebutted in their entire career.

In other words, this list of 300 is basically a con job. The technical term might perhaps be “incandescent vapours and translucent surfaces”, or to translate “smoke and mirrors”.

Why do I take that stance?

Basically because the climate science debate is done and dusted and was finished over a decade ago. The key point here is this …

the science is settled. Human emissions of greenhouse gases are causing the Earth’s climate to change. It’s practically impossible to find a reputable climate scientist who disagrees, or a climate scientist who can support an alternative view. It is also very difficult to find a scientist who thinks that the warming isn’t a problem, or isn’t significantly caused by humans. But, this isn’t a lack of trying on their side.

When the folks denying human influence on climate can only generate the type of signatures attached to this letter, it shows that while they are good at getting press, they are not good at climate science.

… but alas, getting press is all they need, especially in the context of an administration that has no interest in facts.

Patterns: “I have a list of important sounding sciency people who disagree”

The attempt to impress with a list of “scientists” is a pattern that tends to pop up in different contexts.

Here are a few other examples.

There is a list and also an organisation named “Architects & Engineers for 9/11 Truth“. They also have a list.

The problem is that the conspiracy claims they advocate do not withstand critical analysis, and so what we have is something that is akin to a religious faith, not a truly robust evidence based case. This is perhaps to be expected, 9/11 was a highly emotive event and so finding that some respond emotionally is not a surprise.

Review either and you find a familiar pattern. The names are those with a science degree in something completely unrelated.

To poke a bit of fun at the above, the National Center for Science Education did a “tongue-in-cheek parody” called “Project Steve“. That is a list of scientists with the given name Stephen/Steven or a variation thereof , and is far far longer that any of the above creationist lists. It was of course a bit of a hat-tip to honour Stephen Jay Gould. Those who signed were genuine biological scientists named Steve who declared …

Evolution is a vital, well-supported, unifying principle of the biological sciences, and the scientific evidence is overwhelmingly in favor of the idea that all living things share a common ancestry. Although there are legitimate debates about the patterns and processes of evolution, there is no serious scientific doubt that evolution occurred or that natural selection is a major mechanism in its occurrence. It is scientifically inappropriate and pedagogically irresponsible for creationist pseudoscience, including but not limited to “intelligent design,” to be introduced into the science curricula of our nation’s public schools.

“We did not wish to mislead the public into thinking that scientific issues are decided by who has the longer list of scientists!”

… and that quite frankly cuts to the heart of the matter.

Reality is not a democracy

The fundamental problem with such lists is that reality is not something we decide via a vote, that is not how the scientific methodology works.

If somebody has a claim, then they also need to cite independently verifiable evidence to backup that claim. It needs to be transparently clear evidence that is robust enough to convince the wider community.

When it comes to observations regarding climate change, lots of different ideas that might explain the observations have been robustly examined, for example natural variability, variations in sun activity, etc… The only one left standing is that humans are the main cause of the current global warming.

This is not a belief or a doctrine that is embraced as a faith, but rather it is what the clear decisive verified and independently checked data tells us. If nobody actually accepted the evidence and every human rejected this idea, it would not cease to be true.

The fundamental flaw with lists is that reality is not something we vote on.