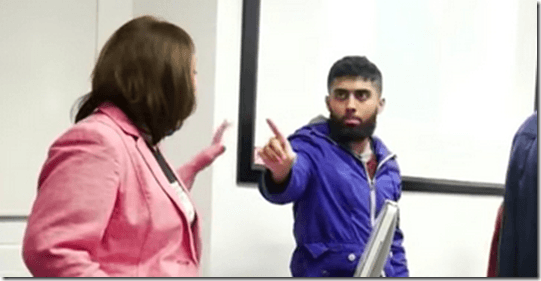 Since blogging about this rather bizarre confrontation a few days ago, things have become even weirder and far more bizarre, so much so, that it all warrants a return to take a closer look at ISOC (The Goldsmiths Islamic society).

On 30 November 2015 Maryam Namazie gave a talk at Goldsmiths University. She had been invited by the Atheist, Secularist and Humanist Society, and as you might anticipate, the Islamic society tried to shut it all down but failed to have her silenced, so they turned up and proceeded to disrupt her talk with a constant stream of intimidation and general thuggish behaviour.

Now this is where it all gets truly weird …

So let’s look at each of these claims

Putting aside the actual stance taken by quite a few variations of Islam regarding feminism and gay rights, we shall take on board the “Oh but that is ‘them’ and that is not us” argument and focus on just those involved in this incident.

If you look at the video of the talk, the first observation is that you can clearly see that ISOC only lets the “brothers” sit in the front row, the “sisters” have to sit at the back and remain silent. But that aside, others have wondered about their stance, and so they have looked and found this…

I carried out a quick search of ISOC’s social media pages. Any postings in support of LGBT or feminist issues eluded me, oddly. Apart from this event advertisement, in which they do the work for me by confirming Islam and feminism are mutually exclusive: 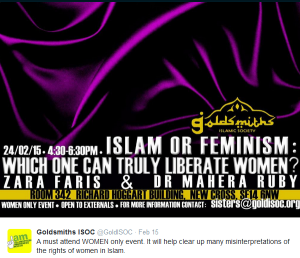 What about Maryam, the speaker that they are taking a stance against, what are her views of feminism?

What about gay rights, where do ISOC stand on that issue?

The President Of Goldsmiths Islamic Society is Muhammed Patel and the short answer is that he is very openly and vocally opposed to any and all gay rights. Somebody did an analysis of his various social media postings and that clearly demonstrates where he stands on this, and many other, topics.

Incidentally, if you follow that link you find that Mr Patel is buying into and promoting some truly obnoxious stuff …

I know of half of the speakers at the event above. They’ve made statements advocating the execution of ex-Muslims and blasphemers, advised Muslims to boycott women who marry outside of Islam, said that non-Muslim women will be taken as slaves in the future (of course it is permissible to have sex with these women),  creepily remarked that six and seven year old girls are ‘pretty’ and ‘desired’, warned of the dangers when leaving Muslim children with non-Muslims, insisted that women should remain in the house and not venture outside unless it’s a necessity, advocated punishments for Muslims who do not pray, and said that homosexuals are worse than animals.

… and this is not a random ISOC member, this is the president of a society that both the Goldsmiths LGBT and Feminist societies decided to align themselves with.

So what about Maryam, is she homophobic or does she support gay rights?

Oh come on now, I’m sure you can guess, and yes, she is very much a gay rights advocate, and will (quite rightly) not shut up about it.

You could of course read Maryam’s blog posting about what happened and perhaps accept her word on it all, but you need not, and can simply watch the video yourself and see how these “brothers” behaved …

Here are a few notes …

Once the rowdy guys have been ejected, the Q&A developed and evolved into a really good session.

A gang of homophobic misogynistic Islamist thugs turned up at a talk at Goldsmiths university give by secular, ex-Muslim, pro-gay-rights, feminist activist and proceeded to harass and intimidate her, then lied about what happened. The LGBT and Feminist societies then decided to bestow upon themselves the role of “Turkeys voting for Christmas” and issued statements of support for the Islamist thugs, and the response of the Students Union has been an attempt to bury the evidence of what actually happened.

What this is Not About

What this is not about is anti-Muslim hatred, but rather is about the deployment of criticism for some truly bad ideas, and if you watch the video of the talk you will find that Maryam makes that abundantly clear. There were some other Muslims in the room watching the behaviour of the ISOC “brothers” in compete shock, and apologised to Maryam for what went down.

There is a prevailing myth that is circulated by Islamists that Maryam is an anti-Muslim racist, but this reveals that it is Maryam who speaks the truth and that it is the Islamists who are lying, and promoting hatred.

They have basically only two counter arguments of rebuttal against Maryam and these are as follows:

Universities are supposed to be places that are melting pots for different conflicting ideas. If indeed we deployed censorship for anything that offends anybody, then everybody would end up being gagged, because everybody finds something offensive.

Do the Islamists really wish to be held to this standard of censorship?

If so, then they should perhaps consider the thought that much of what they advocate is highly offensive to rather a lot of people, and the Quran itself, a book that labels me as the vilest of animals simply because I do not believe the nonsense it contains, is offensive, so shall we censor it all, or instead shall we embrace the common-sense observation that immunity from being offended is not a human right, it never has been.

4 thoughts on “The Goldsmiths Islamists (ISOC) & their LGBT & Feminist “Friends””