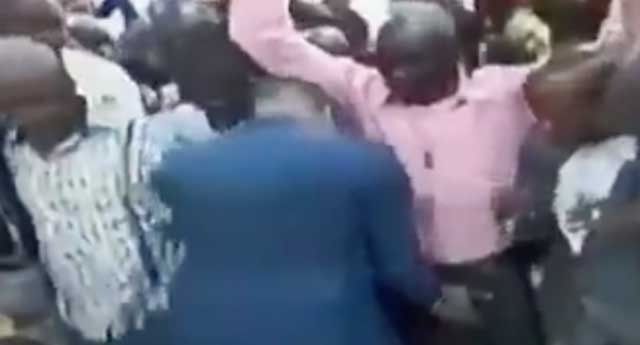 OK, something slightly different today, this is all about weird beliefs and how to cope when faced with such things.

Over in Ghana, self-appointed Bishop and TV evangelist Daniel Obinim, has made himself rather famous recently by announcing that he can enlarging mens penises by massaging them with both hands.

Being a traditional preacher he is also rather homophobic, hence this latest revelation is a delight to the readers of Pink News. There they note that he is not being gender specific, and announced …

“If you want big buttocks I can do it fork you, if you want big breasts, I can help. If you have a small manhood, I can change them all when I come to the spiritual realm.”

Men can be seen forming long queues to be touched by the preacher, as he presses one hand against each man’s crotch, two at a time.

… He was also reported to have slept with the wife of another pastor, but then claimed it was fine, because it was God’s plan for him to have sex with his colleague’s spouse.

Did he really do this?

Oh yes, very much so.

I note that the BBC reports …

The men obediently stand in line, with their arms raised in their air, waiting for their turn to be touched by the preacher.

This seems to be the restrained version of his prayer said to cure men suffering from impotence. In another video shared online last year he is seen praying over a man whose penis is exposed.

He has a bit of a history of being weird

In 2014 he was observed on his TV show stepping on the abdomen of a woman, who was reportedly pregnant. This was to supposedly exorcise her from being possessed by evil spirits.

Pentecostal pastors are known for using different methods for deliverance in their various churches, from laying hands to speaking in tongues.

But some pastors choose to take deliverance sessions to a whole new ridiculous level such as a pastor stepping on a pregnant woman’s stomach while praying for her.

Here are five of his most ridiculous claims …

He Can Turn Into Anything Including Animals And Trees

He Can Retrieve Passports From The Spiritual World

He Can Change Body Parts

…He asked his members to approach him if they feel they are not content with a body part and he’ll change it for them. He said he can enlarge b00bs, butts, manhood, make someone tall or make another short. B

He Is An Angel

… According to him, he’s been made an angel by his father Jesus.

He Can Enter Peoples Dreams

Regarding that first one, when he was claiming that he could turn into an animal, he was mocked on twitter by no less a person than the UK’s High Commissioner to Ghana Jon Benjamin.

Last August we also had the famous incident where he publicly flogged two teenagers, one of whom was pregnant, on live television. Apparently they were guilty of having sex. They did not willingly consent to being flogged and so this led to a public outcry over this, hence he was subsequently arrested.

I note that the Wikipedia page entitled “Christianity in Ghana”, breaks things down as follows ….

What now becomes rather clear is that the term “etc.” means “nutters”.

On a slightly More serious note …

A rather important principle is freedom of thought. People should be free to practise whatever belief they have, even if it is both abundantly and very transparently complete nonsense. This guy ticks all those boxs and more. That does however present a rather interesting dilemma. Mr Obinim clearly does not actually believe all this stuff. Instead he is a con man, a grifter, who is leveraging religion as a means to cloak his con and that in effect grants him immunity, and so he is essentially abusing this basic liberty.

What can we do, and what should we do?

One response is to deploy satire and mockery, and generally throw a spotlight upon the fraudulent claims. That perhaps does help, especially if it is appropriately embarrassing for the fraudster.

It can work to some degree. An example of that is perhaps the “snake pastor”, the guy who was feeding his followers snakes and rats, which he claimed had been turned into chocolate. The ridicule and mockery that followed worked, because locals later chased him out of Soshanguve, a township north of Pretoria where his church was located. Alas, you know the story, he simply pops up elsewhere to continue the same con.

However, the fuel for this fire are the marks who happily turn up and open up their wallets.

Peter Popoff, the guy caught faking things back in the 80s is still very much in the religion business today. At the time of the revelations that he was faking it all, he ended up bankrupt, but alas when you run a religious con, you can simply bounce back like a rubber duck. He purchased a home in Bradbury, California, for $4.5 million in 2007, and also drives a Porsche and a Mercedes-Benz, all funded via donations.

Jim Baker, of PTL fame, who went to jail in 88 for accountancy fraud (He dipped into the PTL account for his own personal use). From that experience he learned a lot of lessons. Specifically, as long as he sticks to legal accountancy obligations, he can continue to pump religion, and so he also bounced back and happily continues grifting.

Alas, I’m simply scratching the surface there. For every one taken down, there will be waiting in the wings a queue of others ready to leap in.

If this issue is every to be seriously addressed, then the fuel that feeds them needs to be cut off. People need to wise up, and yet this is not simply about better education, or a better flow of information, because deep down inside many these grifters are meeting the emotional need of those they con.

So how should you cope when faced with such absurd nonsense?

Yelling at people that they are being stupid does not work, but holding up better ideas can. If you can understand the psychological needs of people, and what drives them to adhere to such beliefs, and can offer something more compelling, then there exists a possibility of leaving the con men high and dry with no followers.