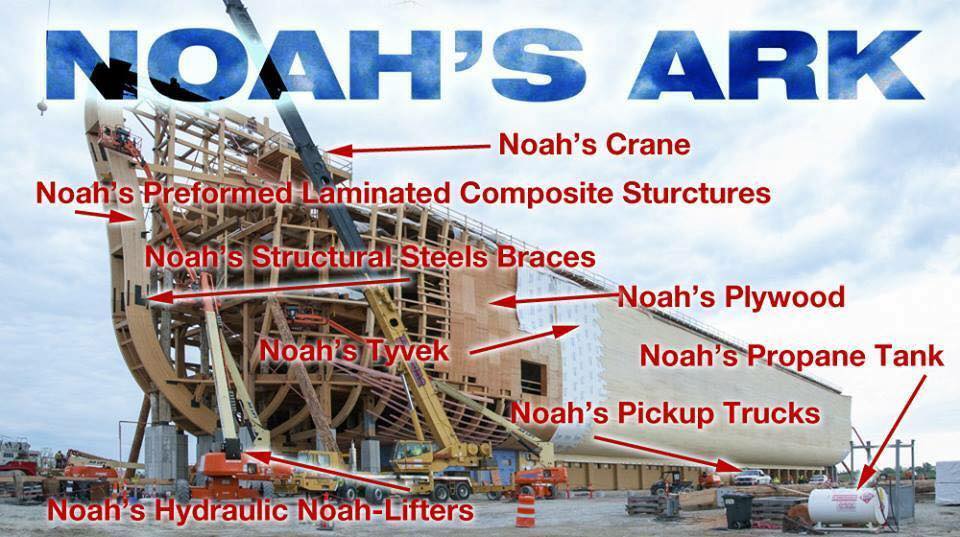 Over in Kentucky Answers in Genesis have finally completed the construction of a life-sized replica of Noah’s Ark and opened it to the public, and so you can now, for a fee of $40 per adult, go and gap at this folly. It might sound like a fun based theme park, but this is not Disney, and is instead religious indoctrination. The line that AiG take is that it is all literally true, so bugger all that evidence based science because apparently planet earth along with the entire universe and all those other hundreds of billions of galaxies, each containing hundreds of billion of stars, are only 6,000 years old.

How do they “know” this?

Easy, the bible says so.

The term that best describes this is perhaps “absurdity on steroids”.

It may indeed be tempting to just laugh at them, but there are two issues here that perhaps raise some concern.

Concern 1 – It was partially funded by State funds.

In Kentucky, Jeffersons wall of separation between the state and religion blurs, and so AiG received an 18 million tax break from the state of Kentucky despite the fact that they openly discriminate. The fact that they will happily hire you as long as you are not gay or Catholic, or basically anything that is not them, should concern the state, but apparently not.

Concern 2 – They really believe it all

Once you abandon both reason and evidence then all bets are off and you will be potentially start embracing the utterly absurd as “truth” while rejecting reality as myth.

… hence it should come as no great surprise to discover that from their viewpoint one of the big modern villains of our age is education.

How did their opening go?

Did the crowds flock in their millions to see Noah’s Folly and thus open up a vast stream of revenue for AiG?

AiG estimate 2 million will visit in the first year, yet those that turned up did not exactly observe that things were going all that well …

Now there rests hope, because if that is indeed how things are working out then they will end of going bankrupt.

Scenes from the Ark

On behalf of the Friendly Atheist blog Tracey Moody turned up and filmed it all, so if curious to find out what the $40 entrance fee (yes $40) gets you, then you can surf on over to his blog to see the pictures.

So did Tracey drop to the floor and weep uncontrollably when faced with the evidence of it all?

In one sense yes, but not because she had a profound religious conversion experience, it was instead unconstrained laughter.

One also can’t help but wonder if the visitors are being asked to enter two by two.

Then again, if you truly have abandoned reason and evidence and have instead opted for “magic”, then dreaming up answers to the above should be no problem, and so there rests the real key to it all …

How do you work out what is actually true and what is just myth?

Address that and everything else will quite naturally fall into place.