This is an old story from last January, but oh so nice … and yes I only just came across it … apparently it takes me almost nine months to catch up with stories in the Telegraph. I’m highlighting it because I thought that you might enjoy seeing a racist plonker get his comeuppance. 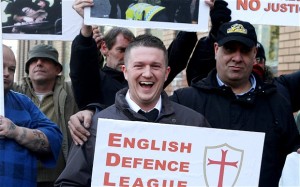 Tommy Robinson (apparently not his real name and sentenced using the name Stephen Lennon), is an EDL ‘leader’ (twat) who promotes a considerable degree of xenophobia against many on the sole basis that they are “foreign” was jailed for being an illegal immigrant.

So who are the EDL (English Defence League)? They are essentially a loosely coupled group of right-wing idiots whose primary form of activity is violent street demonstrations. Politically they are so far to the right that they might consider Hitler to be a tad too libel for their liking – in essence this is simply a collection of football hooligans, far-right activists and pub racists.

Anyway the story in the Telegraph from last January explains …

Lennon used a passport in the name of Andrew McMaster to board a Virgin Atlantic Flight from Heathrow to New York, but was caught out after his fingerprints were taken by customs officials.

He left the airport and entered the US illegally but left the country the following day, using his own passport to return to the UK.

The court heard that Lennon, who had previously been refused entry to the US, used his friend’s passport to travel to the country in September.

He used a self check-in kiosk to board the Virgin Atlantic flight at Heathrow, and was allowed through when the document was checked in the bag drop area.

But when he arrived at New York’s JFK Airport, customs officials who took his fingerprints realised he was not Mr McMaster.

Lennon was asked to attend a second interview but left the airport, entering the US illegally.

He stayed just one night and travelled back to the UK the following day using his own legitimate passport – which bears the name Paul Harris.

The court heard that is the name that appears on the EDL leader’s passport, although he uses aliases.

WTF … this complete plonker had his own passport with him, and yet attempted to use another … why? The judge explains …

“You knew perfectly well that you were not welcome in the United States.

“You knew that because you tried before and you had not got in, and you knew the reason for that – because, rightly or wrongly, the US authorities do not welcome people in their country who have convictions of the kind that you have.

“With that full knowledge, you equipped yourself with a passport. I am told that it was given you by way of a loan from your friend Andrew McMaster, to which you bore, I am told, some resemblance.

“And by use of that passport you did what you could to get into the United States.

“But you did not get in because they took your fingerprints and they worked out that you were not who you claimed to be. “I am told that, by whatever means, you slipped away from the US authorities, got into the country and then very rapidly – and understandably so – got out of it.”

He said Lennon had used his own passport to get out of the US, adding: “You did so, I am quite sure, in order to avoid the consequences that would have fallen upon you had you been caught by the authorities in America.”

The judge went on: “What you did went absolutely to the heart of the immigration controls that the United States are entitled to have. “Had it been known in this country that you were proposing to leave under a false passport, you would not have been accepted on to the plane and you would not have been permitted to leave this country on a false passport.

And the final result …

He sentenced Lennon to 10 months in prison