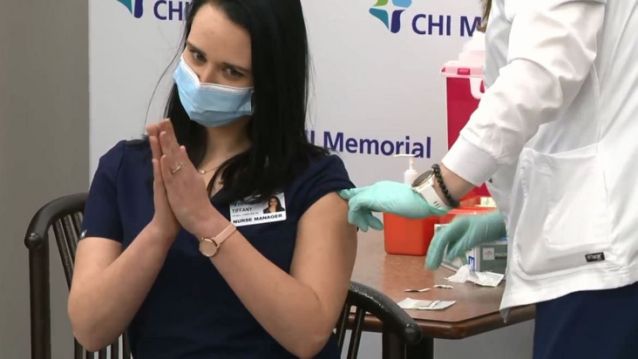 This is perhaps a truly bizarre conspiracy theory. Tiffany Dover is a nurse from Tennessee who is being personally harassed by anti-vaxxers who are convinced that she is dead. They are not only harassing her, but also her employer and her family whom they insist are part of some grand conspiracy to cover up her death, supposedly by vaccine.

It is not simply one or two people.

More than 22,000 comments have appeared on her last Facebook post, from people around the world—a collective grieving and outpouring of anger for the supposed death of the 30-year-old mother of two, who is alive and well and is just fine.

How did this happen?

Let’s take it step by step.

Last December she volunteered to receive a COVID-19 vaccine.

As a front-line worker in critical care she was also a priority, and so on Dec 17 she is seen on camera receiving it as a formal media event. Shortly after, while answering questions from reporters, she faints. She then quickly recovers and explains that she has a medical condition that causes her to faint like this.

Here is the local media reporting the story …

Below is another media clip.

She is being interviewed about what happened, and explains that this happens to her all the time …

She simply felt a bit light-headed after receiving the shot, passed out and quickly bounced back.

Anti-vaccine activists, seeking to scare others about COVID-19 vaccines, deceptively edited the video, showing the fainting but not her quick recovery. This shortened video went viral.  Note that what they did is deliberate fraud, they lied about what happened.

Fainting after a jab is not unusual. It is standard practise as ask people to sit down for about 10 mins after receiving any shot. People do commonly faint like this, even for simple things such as taking a blood sample to test.

Once the edited video went viral, rumours started spreading that she was dead.

Lying is the anti-vaccine strategy …

Voices for Vaccines have created a video to address these fake reports of deaths after Covid-19 vaccines.

As for Ms Dover, multiple reputable media outlets have verified that she is alive and well and that the claims regarding her are false …

None of that mattered to those with an agenda, and so the outright harassment of her, her employer, and her family rapidly increased.

Someone even made up a fake obituary.

Her employer has issues formal statements assuring that she is fine …

Globally, tens of thousands of very gullible people have descended on her social media accounts and proceeded to harass her, insisting that she is dead. The found her family members and started harassing them as well.

Assurances from family members that she is fine did not help, they simply accused them of being part of a conspiracy.

Groups sprung up on Facebook designed to promote this batshit crazy conspiracy.

The following is a legal opinion from Dorit Rubinstein Reiss, Professor of Law at the University of California Hastings College of the Law …

The targeting of Ms. Dover was intense, global, relentless, and based on false information. While I am sure some of the people posting were not intending to harass her, when thousands of people descend on a private individual like that, it is harassment. When people make up death claims in the face of repeated denials from family and employer, it is harassment. And way out of line.

It does not matter if a specific individual was intending to attack Ms. Dover. If they came in as part of the attack, they were participating in harassment.

It was fair and appropriate to ask how Ms. Dover was, given that she fainted on TV – but once an answer was given and a video released, continuing to push was harassment.

Guidance – What can you do if harassment happens to you?

Rather Important Side Note – Vaccines really do work

The following statistics below are sourced directly from the CDC.