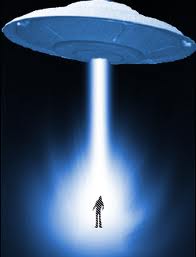 There is a report of Alien abduction from about a month ago that I have just come across.

It concerns a chap who wandered into his garden in the middle of the night, and found that he had lost an hour. Apparently he really had lost an hour and had solid proof, his watch was one hour out of sync with the rest of the world, in fact he was quite astonished to discover that he had  leap forward into the future. So he contacted the Ministry of Defence to report a UFO abduction.

The details read as follows:

It was an ”unseasonably mild” night in late October when the man from Barnes, south-west London, could not sleep so took to his garden with the drink. ”After a few moments I heard a distant roar of engines getting louder and louder,” he told the Ministry of Defence.

”Suddenly a huge craft appeared over the house, heading in a westerly direction at speed. It was a large cigar-shaped vehicle with large projectiles on each side like wings. It seemed to have two very bright lights at the front and a white light flashing round and round underneath.I think that there were also coloured lights at the ends of the projectiles but I am not certain – I was too bloody terrified. There also seemed to be a line of lights (which I took to be windows) along the side. It disappeared into the distance but as it did so it seemed to be getting closer to the ground.”

”As you can imagine I felt quite shaken. I thought of reporting it to the police immediately but decided to leave it to the following day. I then returned to bed and surprisingly fell asleep.” He went on to say he had gained ”a whole hour”.

OK, that’s his claim, so are you now curious to learn the truth? The MOD chap who investigated was on the ball and quickly worked it all out:

So what might be a more natural explanation? The first is easy, Barnes (where he lives) is on the flight path going into Heathrow directly to the west … think, cigar-shaped vehicle with wings … think alcohol … yes indeed, not a huge leap to explain that one.

“Ah“, say the UFO believers, “how do you explain the one hour leap into the future?” .. Now this one is the punch line to all this …

It was October, the clocks went back one hour the previous night.