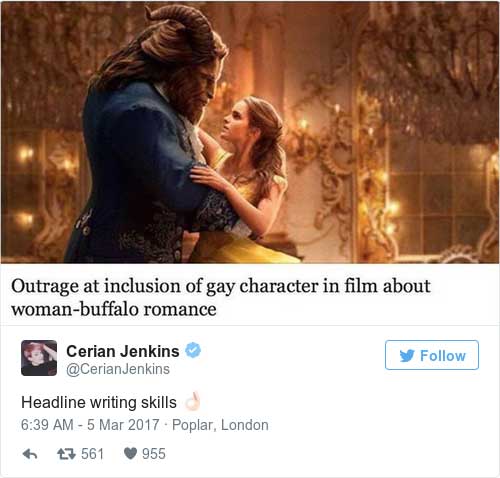 Basically the filter is that if it is specifically religious in nature and also crosses the “You have got to be fracking kidding me” line, or perhaps is simply a bit of satire or parody, then it makes the list.

Without any further preamble, here are this week’s top three.

The background context here is that Pope Francis has been pope for four years now, and so to mark that anniversary the UK’s Independent published a list of notable things he has said. Within that list they highlighted a few rather good things, for example that the big bang really did happen, that evolution is factual, and that non-religious atheists can be good people. All very sensible mainstream stuff and not in any way controversial … unless you happen to be a young earth creationist like Ken Ham.

His response was a bit of a twitter rant, and so he proceeded to tweet the article out with a rebuttable … multiple times.

This one is the true gem of bizarreness …

… and here are a few of the others.

Evidence based Evolution and Genesis conflict, and so that means that only one can be true. Can you guess which he goes for …

If Pope said atheists are 'good people'–Bible says there's only one "good" and that's God https://t.co/peuMu1w9es

Mr Ham really only has one book, the same text that declares that having slaves is just fine and that beating them is OK as long as the slave survives the beating …

Doesn't matter who it is, the Pope or any other human being-all statements need to be judged against God's Word https://t.co/peuMu1w9es

When you jettison reason and common sense and instead opt to just believe no matter what, then you will end up trying to defend some truly bizarre stuff.

The movie got a mention last week when Franklin Graham make the list with his proposed Boycott of Disney’s Beauty and the Beast because it has a gay’ish character, so it is perhaps no surprise that others want to jump on that same bandwagon and demonstrate that they also can be obnoxious twits.

On a recent episode of his “Pray In Jesus Name” program, Religious Right activist and former GOP state Rep. Gordon Klingenschmitt called on Christians to boycott the upcoming “Beauty and the Beast” movie so as to prevent demonic spirits from using it to “recruit children into sin.”

… Disney and those involved in the production of this movie are being driven by demonic spirits to “intentionally [promote] sin to children,” he warned.

“There is destruction in the future of these people who cooperate with that evil,” Klingenschmitt said, as he prayed that God will “stop the recruiting of our children into the sinful lifestyle of homosexuality” and that Americans will finally “wake up and boycott the Disney corporation,” which he claimed has been “using money to fund the gay agenda for decades.”

So apparently the introduction of one gay’ish character for the first time ever is equivalent to Disney “funding a gay agenda for decades“, and this is all being driven by “demonic spirits“.

OK, let’s try a slightly different twist on it all. We are supposed to believe that because one of the side and minor characters in a love story has a gay persona, then the kids watching it will become gay. If indeed sexual orientation is that fragile, then all the anti-gay conservatives need to do is show a few movies that contain non-gay characters to sort out all their concerns.

I’m about to get you to watch a creationist video, specifically one that has been produced by Creation Research called Unlocking the Mysteries of Genesis, and you are going to find it quite hilarious.

So what would you do if a  relative gave you an 18 minute creationist video?

Probably roll your eyes. For one chap that however was not his response. Instead he annotated all 18 minutes with his own subtitles and then posted it to YouTube on 14th March.

The producers might potentially object to this, but he does point out where he stands legally …

The fair use doctrine allows for the transformative use of copyrighted material for the purposes of commentary, criticism, and parody. I do not claim copyright to the original production, but I do own a legitimate copy of the work given to me by a well-intentioned relative who wished dearly to save my eternal soul, which I gladly compromise here for the sake of open inquiry.

They have also now got thousands of non-believes watching their entire video. Here are some of the reactions from the comments under it …

This is absolutely BRILLIANT! Freakin hilarious, too.

Eventually, I stopped reading the subtitles because I was laughing too hard at the original content.

I’m not sure what bothers me more, the subject matter or the annoying way they used the slanted camera angle (french method) for all these shots.