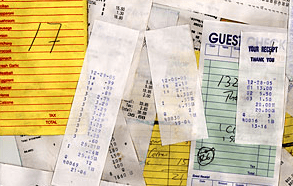 Nothing too serious today, but instead a bit of fun.

What’s the weirdest, most bizarre, or just plain odd expense a client has tried to claim, or receipt they’ve handed in?

… and so from the comments under that I have personally mined out the 12 that I consider to the truly weirdest, and listed them below. Now remember, these are all quite real.

Many years ago I acted for a company run by an Italian gentleman with close ties to his “family” back in Sicily. Hidden in Sundries was an invoice for the cost of an artificial leg: on enquiry, it turned out that the recipient of the leg was a customer who was a habitually bad payer and had suffered a freak accident with a sledge hammer……..

2. The chap who was barking up the wrong tree

I had a client who worked from home as an IT bod and also was a delivery driver with his own vehicle.

He gave me all his receipts for vet bills, dog food etc as he believed his dog was principally a guard dog for his home office and the van when out doing his rounds – he was incidentally a pet per the client.

It wasn’t a Doberman, Alsation or anything “substantial”, but a miniature Yorkshire Terrier!!

I once came across an invoice from a clinic which (after searching the internet) was obviously a  breast implant for the wife of the client – It was in repairs and renewals! I looked at her carefully next time we met.

4. Most of the right letters

Many years ago when I was temping in a merchant bank, an invoice came in from an odd job man who’d clearly been asked to do a bit of plumbing, and to sort out various problems with cupboards.

The invoice had been typed up badly by the sort of person who doesn’t believe checking is necessary. Many words had, as Eric Morecambe might have put it “most of the right letters” but not necessarily in the right order.

There were repairs to the snik.

We also had repairs to the Fling Cupboard, which had my boss in stitches for days after this, and he never referred to it as anything else thereafter. I think it’s a great name to describe how people often use cupboards!

6. Yep, that is actually allowed

Weirdest was an “escort” who claimed for a gross of condoms. (And yes, I decided they were allowable)

7. Staying on the straight and narrow

My weirdest ever . . . . an invoice for several thousand pounds for the (ahem) straightening of (ahem!) an appendage . . . .

Needless to say . . . . . this was not claimed and we never actually broached the subject with the client.

8. I need to verify that

Had a client who was a stripper and wanted to claim for a boob job.  Of course, I had to perform a physical asset verification first.

9. Stepping out in style

Have a client who tried to claim for a pair of Christian Louboutin high heeled shoes, quite what he needed those for on an oil rig in the middle of the North Sea, one can only imagine

One farmer brought his invoices in and among them was a lab report for a bull’s sperm test. In case you’re interested the extraction method was described as ‘manual’ and the available ratings for quality were ‘watery’, ‘milky’ and ‘creamy’.

11. This one gave me the chills

As a very young and inexperienced auditor, I queried the client’s purchase of a refrigerator.  I glowed red when he said it was for keeping the bodies in as they start to get a bit high in the summer.  It was a funeral director. Never lived it down.

We have a female entertainer who had claimed 50% of the cost of a breast enhancement. Her earnings shot up after the procedure which she said made her much more confident. She was on enquiry when she came to us and the Inspector (remember them?) said there was no way this was allowable. We said he should wait until he met her, which he did and then allowed the claim. Not sure a female inspector would have been so forgiving!

I have my own example as well

Finally, not from the comments at AccountWeb, but instead an actual example I’ve personally come across. I once worked at a company where one chap made himself rather famous by submitting an expense report the contained an item described as “Conjugal rights”, and least you wonder, yes it is exactly what you think it to be. Apparently he had engaged a hooker while on a business trip and then later attempted to claim it as a business expense.