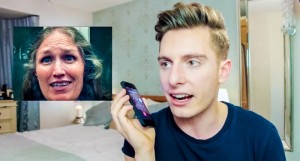 There are some positions that are so absurd, so beyond reason and basic human empathy, that the only recourse we have left is humour. Yes indeed, I’m thinking of that bastion of bizarre belief, Westboro Baptist Church. I suspect there is nobody left who has no idea who they are or how absurd their position is, but then that is perhaps what drives them to behave as they do … they love the glare of publicity, even if it is all negative.

Riyadh K, in Ireland, has a YouTube channel that Shirley Phelps had left comments on, Riyadh notes that  …

Shirley aggressively used the word “Fag” 41 times over the course of one week while commenting on my videos.

… so he decided to give her a call and ask for some guidance on how to get into heaven. The result is hilarious, and also up on YouTube.

Many agree, he only posted this 3 days ago and already has over 1 million views and 7,900 likes, and here is my favourite from the comments

Crosby4hyg 2 days ago
Arguing with the Westboro Baptist Church is like playing chess with a pigeon. You can checkmate the pigeon in five moves but it will still knock all the pieces around, shit on the board and then strut around triumphantly.