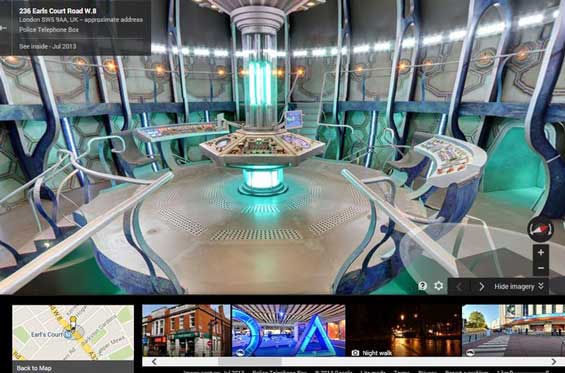 Before we dive into the list, let’s start with a quick bit of Software Easter Egg history. Who was the first and why was that specific term used?

The Birth of the very first Software Easter Egg

Back in 1979, Warren Robinett, the developer of the Atari 2600‘s Adventure, was rather frustrated by the fact that designers like him were given no credit for the work, so he placed a hidden room in the game that would allow a player to reach a screen that displayed the words “Created by Warren Robinett,“. Once word spread about this players were soon scurrying through every corner of the game world to try and locate Robinett’s hidden message. When interviewed, he laid out the entire story as follows and explained how the term “Easter Egg” was coined to describe it ..

F:  Aside from being the first graphical action-adventure game, Adventure was also the first game to feature an “Easter Egg”.  What motivated you to include such a thing, which at that time was unheard of?

WR:  Atari would not give public credit to game designers.  This was right after Atari had been acquired by Warner Communications.  It was a power play to keep the game designers from getting recognition and therefore more bargaining power.  So I created a secret room that was really hard to find, and hid my signature in it.  I didn’t tell anybody (this was a hard secret to keep to myself) and let Atari manufacture a few hundred thousand cartridges and ship them around the world.

F:  Hehe, that’s great.  How long had Adventure been released when Atari found out about the Easter Egg?

WR:  I don’t know exactly.  About a year, maybe less.  I handed over my finished code (with the Easter Egg in it) in June 1979, and quit.  The game was released for the Christmas season in 1979.  I went back to my hometown in Missouri for a while, then traveled around in Europe for a while.  When I returned to California in the spring of 1980, I think it was known by then.  At least by summer 1980, it was known.  I went out with some of the Atari game designers one night for pizza and beer and told them about how I did it.  I saw a gleam in Rob Fulop‘s eye, like he was already planning his own Easter Egg.

F:  Since you left Atari before the game was released, they couldn’t do anything about the “egg”, right?

This was when the “Easter Egg” got its name.  The manager of the 2600 game designers at that moment was named Steve Wright, I believe, and he said hey, it’s kind of cool to have little hidden surprises in video games.  It’s kinda like waking up on Easter morning and hunting for Easter Eggs.

So what are the top 10 best examples?

“Best” is of course wholly subjective, so here is a list of my 10 favourites.

For this first one, it is not just one specific example, but an entire corporate culture that churns out easter eggs on a regular basis. Google happily endorses their developers doing this because it helps to foster a bond between them and their user community. There is an entire webpage on Wikipedia that lists many of them. Here are some examples …

Try a  Google web search for any of these …

Be warned, these come and go, and so some that used to work no longer do. There is an ever changing landscape of these.

Error 404 means that the link you clicked goes to a webpage that is no longer there. Some sites intercept 404s and route you to a bit of fun. Here are a couple great ones …

The 404 for the NPR website lists other missing things, from Atlantis to Wally, to your luggage. 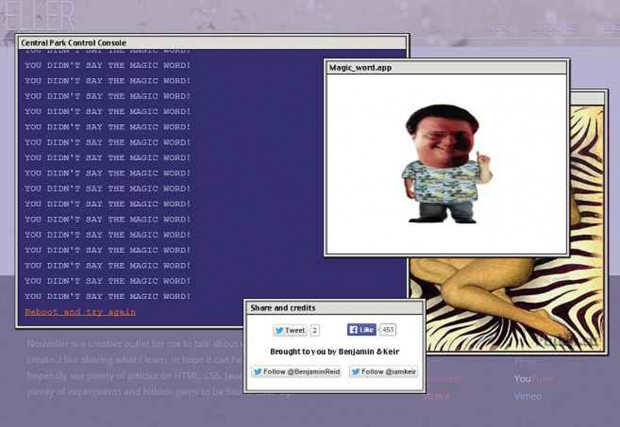 However the best is perhaps at nouveller.com/404 – As illustrated above, that recreates the famous sequence from Jurassic Park, where hacker Dennis Nedry lets the dinosaurs loose. To get it to work you will need to enter the magic word (You need to have seen the movie for that).

The classic example of this was in Excel 97. Using Excel 97 (only that one, MS yanked it from later versions), do this …

… you then get a flight simulator that glides you over the surface of the moon. You will find a mountain that you can fly over that has a list Excel developer carved into it.

Alas, nobody has Excel 97 anymore, so is that it for flight secret flight simulators?

Nope, Google Earth has one. Launch the Google Earth (this works in version 4.2) and hit Ctrl+Alt+A (or Cmd+Opt+A if you are on a Mac). That gives you a full flight simulator that lets you choose an airport, plane type, and lets you fly inside Google Earth. Be warned, it is not easy to use, so here are some instructions from Lifehacker on how to navigate in flight in Google Earth.

Having just downloaded the very latest version I can confirm it works. 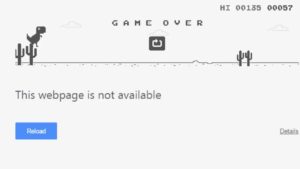 Start up Google Chrome, then break your Internet connection, perhaps by just turning off your WiFi or yanking out your network cable (carefully). Type in anything, and you get the “There is no Internet connection” page that contains the T-Rex game.

Just hit the space bar to start the game. 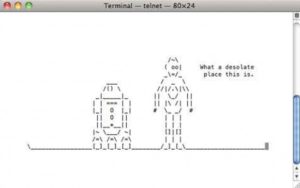 If you have even wanted to watch Star Wars in the original Ascii, then your deepest dreams are about to be fulfilled.

What you will get is the Star wars movie played back to you in Ascii. I dread to think of the number of hours poured into the creation of this.

If you have Windows, it is also possible to get this going, but it gets a tad tricky.

You always read the terms of service … right? Page after page after page of riveting stuff that makes ideal reading if you have trouble sleeping at night.

If indeed you do actually read the WordPress Terms of Service (which you can find here), then when you get to the “Disclaimer of Warranties” section you will find clear evidence that whoever wrote it all wanted to offer anybody who gets that far a small treat. 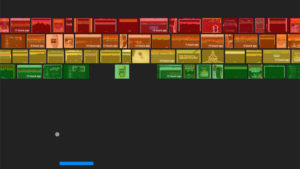 It really is there, I’m not kidding.

Head over to Google Image Search and enter this – “atari breakout”—or just click this link—and say goodbye to the rest of your day. 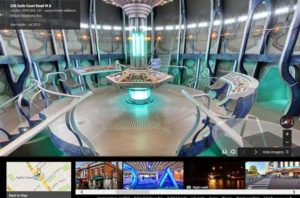 Inside Google Street View you will find that just outside Earl’s Court Underground station there is a Tardis – this link gets you directly there. It really is there and is simply a police phone box, but hey who can resist wanting to take a peek inside.

Press the up arrow key and you step outside our reality into another universe – you will be inside the Tardis.

What you get is a truly weird passage from what is supposedly the Book of Mozilla. It reads like something out of the Book of Revelations and so it even refers to the “twins of Mammon”.

Least you wonder, that’s a reference to Apple and Google.

That is not the only about. You can also try out “about:robots” to see what happens.

Start up Microsoft Outlook the proceed as follows …

I really am just scratching the surface here, there is lots more to discover.

For a far more comprehensive list, check out the Easter Eggs Archive.