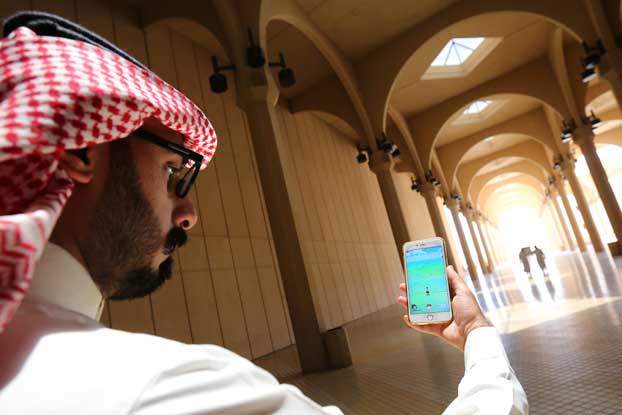 I’m speculating about your thoughts, but my guess it that you will most probably conjurer up mental images of lots of little Pokémon being beheaded, and that is not too far from the truth.

We have been here before, because back in 2001 when Pokémon first went viral, the Saudi’s issued a religious Fatwa banning it. Now that Pokémon Go has arrived … well guess what …

Saudi Arabia has renewed a fatwa on Pokemon because it violates Islamic rules on gambling and uses images such as Christian crosses and Jewish stars.

The edict warning the popular game was haram, or forbidden, was first issued in 2001 when it was played with cards. Now Muslim clerics have re-issued the ruling following the release of Pokemon GO for smartphones.

It warns the game includes triangular symbols related to Freemasonry and other symbols that promote the Islamic sin of Shirk, or worshipping any God other than Allah.

Meanwhile over in Egypt …

A senior official at Egypt’s Al-Azhar, the pre-eminent seat of Sunni scholarship in the Muslim world, has also weighed in. Abbas Shumman said users could lose their sense of reality and endanger themselves while playing.

Over in Russia the official Orthodox Cossack Society (yes, thats a real group), have also declared it to be the tool of Satan …

Others in Russia have also been reported to comment that it is clearly a tool of the CIA.

So what do the evangelicals in the US make of it?

Rick Wiles, the host of the TruNews radio program, a Far-Right fundamentalist Christian radio show, has been banging on about how it is channelling “cyber-demons”, and also that Islamic jihadists will be using it to target and kill Christians.

With tongue placed firmly in my cheek, we can clearly conclude that the more inclined you are to hold an extreme religious view, the more probable it is that you will consider Pokémon Go to be a tool of Satan – in other words, we appear to have accidentally discovered that Pokémon Go is the perfect extremist detector.

Perhaps we can persuade the powers that be to issue it to all immigration staff.

Meanwhile in a US State department briefing on ISIS …