It was just a fun FB quiz, and it asked, “Who was the greatest Human?”, then offered a list that included Buddha, Mohammed, Krishna, Jesus, Chuck Norris (yes really), and also the possibility of adding alternative names yourself.

Looking at it so far, Buddha appears to be winning.

But wait a second, this all set me thinking – what exactly does the word “greatest” actually mean, how can you measure something like that? If by greatest, you mean “Who has successfully conned the largest number of people?“, then I guess Jesus wins and Mohammed comes second, but I’d seriously question such influence as “greatness”, because in reality these founders of the various belief systems have inspired  a considerable degree of poverty, misery, intolerance, violence, and war … all garnished with very generous portions of delusion.

So after mulling it over, I have some alternative candidates that I would like to suggest are far better candidates for the mantle of “greatest”.

He died only a couple of years ago in 2009, and was an American biologist, humanitarian and Nobel laureate who has been called “the father of the Green Revolution”, and “agriculture’s greatest spokesperson”. He is one of seven people to have won the Nobel Peace Prize, the Presidential Medal of Freedom, the Congressional Gold Medal, and was also awarded the Padma Vibhushan, India’s second highest civilian honour.


OK, lots of awards, but why “greatest”, what did he in fact accomplish?

He took up an agricultural research position in Mexico, where he developed semi-dwarf, high-yield, disease-resistant wheat varieties.

Then, during the mid-20th century, he led the introduction of these high-yielding varieties combined with modern agricultural production techniques to Mexico, Pakistan, and India. As a result, Mexico became a net exporter of wheat by 1963. Between 1965 and 1970, wheat yields nearly doubled in Pakistan and India, and so all this greatly improving the food security in those nations. These collective increases in yield have been labeled the Green Revolution, but beyond all that, this is the key part for me – he is credited with saving over a billion people worldwide from starvation.

Does that last bit nail it for you? It does for me.

OK, so I think by now you can see where I’m going with all this. Ah but wait, if we are going in that direction, then here is another candidate …

In 1901, Landsteiner discovered that different people’s blood had different characteristics that made it “incompatible” with other people’s blood that didn’t carry those same traits. To pat all that another way, he discovered the A, B, and O blood types. This one very key discovery of the differences and identification of blood groups made it possible for blood transfusions to become a routine procedure.  As a result, the door was opened for many other medical procedures that we don’t even think twice about today, such as surgery, blood banks, and transplants.

If that is not enough, he also discovered the polio virus, and that was the groundbreaking discovery that proved to be the basis for the fight against polio.

This is another individual who has in effect saved billions of lives.

It does not end there, the above are not unique individuals, there are many others who have discovered something that saved hundreds of millions of lives …

Perhaps by now you are beginning to realise two things …

Some might bang on about the charitable giving by various belief systems (which to be frank is really only done to get converts), but all that pales into insignificance when compared to the profound impact made by the few above; they have quite literally saved billions.

The fact that their names are not really known is perhaps a sad reflection of our priorities as well. We all know names such as Hitler and Stalin, psychopaths who murdered millions, yet nobody knows the name Borlaug, a chap who saved billions.

Perhaps I should correct that and on occasion pluck out a name and post a “Hero of science” mini biography every now and then.

In the end it is all down to one thing that is perhaps the greatest thing every discovered by humans and has enabled all this to happen – the discovery of the scientific process itself. 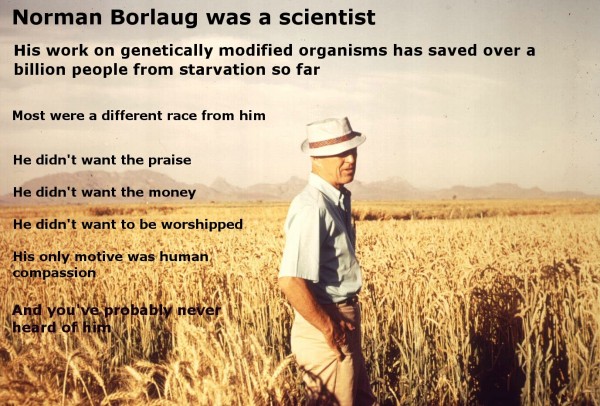