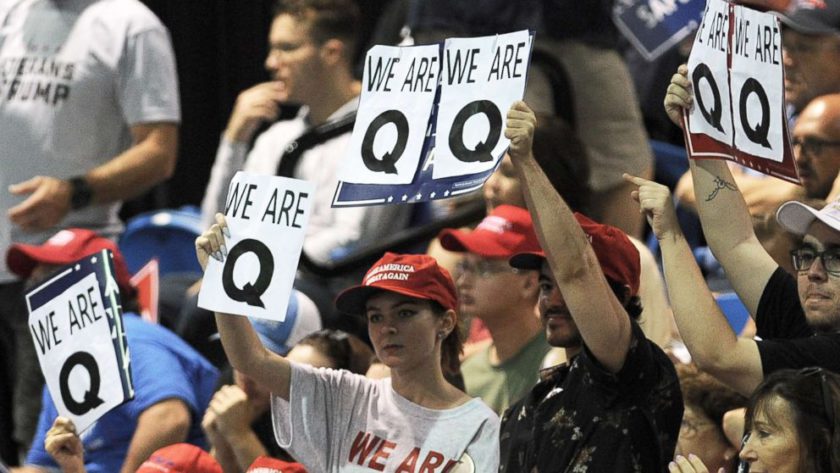 Before we get into Qanon let’s briefly do a quick overview of conspiracy claims that are similar. History is littered with examples of conspiracy claims about “Them”, a secret elite of puppet masters who are in control. The generic claim is that there are a designated few who pull all the strings and orchestrate events behind closed doors.

For a well-known example just Google the word “Illuminati” and read all about, not just the actual history of a society in Bavaria, but the perhaps more popular and better known conspiracy claim concerning a secret group that supposedly controls world affairs. Apparently they mastermind events, plant agents in governments and corporations, and generally manipulate what happens.

Other similar claims includes “New World Order“, The Protocols of the Elders of Zion (an antisemitic canard), Freemasonry (see Masonic conspiracy theories for details). Non-human variations include familiar tropes such as “Greys“, “Reptilians“, “Men in Black“, and of course “Majestic 12“.

It all very much taps into our deep fears regarding mind control, population control, and the manipulation of world events.

The latest most modern variation is of course QAnon.

I do seriously wonder if the folks who dreamed this one up were Star Trek fans.

True believers have terms such as The Storm and The Great Awakening to describe things they truly believe will happen. “The Storm” is an anticipated event in which thousands of people, members of the cabal, will be arrested, possibly sent to Guantanamo Bay prison or face military tribunals, and the U.S. military will brutally take over the country. The result will be supposed salvation and a utopia on earth.

For many years now proponents have been claiming that mass arrests are just about to commence “any day now”. The one consistent outcome is that it never ever happens because of course none of it is actually true or real.

The Atlantic: The Prophecies of Q

What perhaps prompts me to turn my “Illuminati” eye upon all of this is an article in The Atlantic by Adrienne LaFrance.

Titled “The Prophecies of Q“, it is long a detailed. There you will find a deep dive into the complete and utter lunacy that in QAnon. It takes you inside …

You know that a small group of manipulators, operating in the shadows, pull the planet’s strings. You know that they are powerful enough to abuse children without fear of retribution. You know that the mainstream media are their handmaidens, in partnership with Hillary Clinton and the secretive denizens of the deep state. You know that only Donald Trump stands between you and a damned and ravaged world. You see plague and pestilence sweeping the planet, and understand that they are part of the plan. You know that a clash between good and evil cannot be avoided, and you yearn for the Great Awakening that is coming. And so you must be on guard at all times. You must shield your ears from the scorn of the ignorant. You must find those who are like you. And you must be prepared to fight.

You know all this because you believe in Q.

The article starts out by explaining where it all came from and explains how Pizzagate is part of the story. It then moves on to lay it all out.

They hate Hilary Clinton and relish the idea of her being murdered. When asked to comment on all of this, she explains …

“I just get under their skin unlike anybody else … If I didn’t have Secret Service protection going through my mail, finding weird stuff, tracking the threats against me—which are still very high—I would be worried.” She has come to realize that the invented reality in which conspiracy theorists place her is not some bizarre parallel universe but actually one that shapes our own. Referring to internet trolling operations, Clinton said, “I don’t think until relatively recently most people understood how well organized they were, and how many different components of their strategy they have put in place.”

An important moment was the emergence of Q on 4chan on Oct 2017. Predictions were made … but nothing ever panned out. That however never deterred the true believer. More predictions came, and what poured forth became increasingly cryptic. This permits people to interpret it in any way they want.

Q’s tone is conspiratorial to the point of cliché: “I’ve said too much,” and “Follow the money,” and “Some things must remain classified to the very end.”

It tapped into a need some had and instead of remaining obscure, it has gone viral, and grown into a vast number of people …

The QAnon universe is sprawling and deep, with layer upon layer of context, acronyms, characters, and shorthand to learn. The “castle” is the White House. “Crumbs” are clues. CBTS stands for “calm before the storm,” and WWG1WGA stands for “Where we go one, we go all,” which has become an expression of solidarity among Q followers.

“Do your own research” is part of the mantra, and so believers do exactly that, except their sources are quite literally crap, hence they become befuddled by nonsense …

Taking a page from Trump’s playbook, Q frequently rails against legitimate sources of information as fake. Shock and Harger rely on information they encounter on Facebook rather than news outlets run by journalists. They don’t read the local paper or watch any of the major television networks.

The belief is sincere but when asked for evidence it evaporates. The lack of evidence is supposedly your problem not theirs ..

“Until this man, Trump, really opened our eyes to what’s happening. And Q. Q is telling us beforehand the stuff that’s going to happen.” I asked Harger and Shock for examples of predictions that had come true. They could not provide specifics and instead encouraged me to do the research myself.

If you ask for evidence or face them with facts, you encounter these evasive manoeuvres …

When I asked them how they explained the events Q had predicted that never happened, such as Clinton’s arrest, they said that deception is part of Q’s plan….

When I asked Harger whether there’s any evidence to support the assassination claim, he flipped my question around: “Is there any evidence not to?”

Tip: you should not believe stuff because there is no evidence against it. You should only believe stuff that has actual credible evidence. If you adopt their strategy you will end up going down the rabbit hole into a land of pure fantasy.

“Research it” is the common comeback. The correct response to that is … “It’s not my problem, it is your claim, you need to back it up”.

One other interesting tip is this …

You can’t always tell what kind of Q follower you’re encountering. Anyone using a Q hashtag could be a true believer, like Shock, or simply someone cruising a site and playing along for a vicarious thrill. Surely there are people who know that Q is a fantasy but participate because there’s an element of QAnon that converges with a live-action role-playing game.

There is a great deal more in the Atlantic article. It is well-worth reading.

Perhaps now you begin to see just how cultish and religious this very modern conspiracy claim has become.

We live in a world where random things happen. It can be hard for some to come to terms with that. As a means of grasping for control, the pattern seeking engine that sits between our ears can often deliver a joining up of the dots of random events to construct a narrative.

We also live in a world where literally millions have voted into office an incompetent idiot. Coming to terms with that is very challenging for many, and so embracing a narrative that explains away his weird actions and constant stream of lies as all part of a grand plot to overcome dark forces is a solution to the facts they now face. It enables them to think of themselves as being on the right side, crusaders on the side of light pitted against darkness and evil. The alternative, the actual fact-based reality, is almost unthinkable for many; that Trump really is just a buffoon who cares only about himself and nobody else. The emergence of this belief in that context exists because it meets a need these people have.

Titled “The Conspiracy Theory Handbook“, and first published in March 2020, it takes you through the details of how conspiracy theories work, why they take hold, and what strategies you can adopt when in discussion with a true believer.

This is not just opinion, it distills the most important research findings and expert advice on dealing with conspiracy theories.