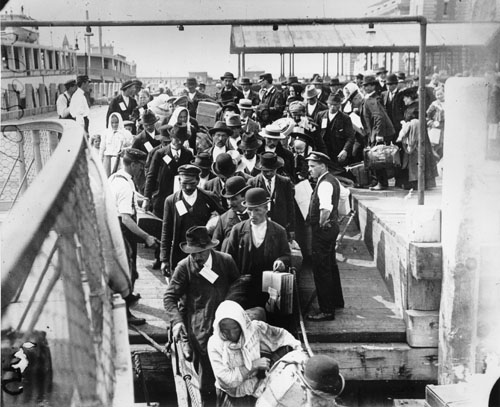 The claim that immigrants are a root cause of much crime is one that has been vigorously promoted by the current Oval office holder. This rhetoric has inspired not only his promises of a wall and deportations of vast numbers, but also xenophobic weekly lists of immigrant crimes designed to stir up a passionate hatred of “them” within the population.

Is there any basis for such claims, do we have any actual data that backs up any of this?

Hint: no, it is all nonsense.

Each generation has seen the rise of a paranoia about “them” coming here to take our jobs and steel what is ours. They are generally perceived to to dirty, generally criminals, and out to game the system. The target for such thinking shifts and changes over the decades … Jews, Asian, Irish, Italian, etc…

Let’s start with this paper …Urban crime rates and the changing face of immigration: Evidence across four decades

Published in 2015, it reveals something rather revealing …

Research has shown little support for the enduring proposition that increases in immigration are associated with increases in crime. Although classical criminological and neoclassical economic theories would predict immigration to increase crime, most empirical research shows quite the opposite.

We investigate the immigration-crime relationship among metropolitan areas over a 40 year period from 1970 to 2010. Our goal is to describe the ongoing and changing association between immigration and a broad range of violent and property crimes.

Our results indicate that immigration is consistently linked to decreases in violent (e.g., murder) and property (e.g., burglary) crime throughout the time period.

Bottom line: If you want less murder and property theft in you area, then you need more immigrants, not fewer.

It is to some degree understandable. People who are motivated to flee their current circumstances and seek out a better life elsewhere are generally highly motivated, and so have been self-selected to be decent hardworking individuals who strive to do well.

What about 2nd generation problems

Some might suggest that 1st generation individuals are indeed hard working and highly motivated to do well and fit it, but then the 2nd generation is where things go badly wrong.

What does the data tell us?

Pew Research has looked into this very issue, and published some rather interesting results in 2015. You can find it all within “Crime rises among second-generation immigrants as they assimilate”

“Ah ha”, some might declare, “here is the proof”. Clearly crime rates soar among second-generation immigrants compared with their foreign-born peers. What is actually going on?

Second-generation immigrants are just “catching up” with the rest of us, claims Bianca E. Bersani, a sociologist at the University of Massachusetts-Boston.

Call it the dark side of assimilation. These second-generation immigrants have become as susceptible to temptation and harmful influences as are other Americans according to Bersani.  The unhappy consequence is a similar likelihood of committing a crime, Bersani wrote in an article published online by the journal Crime & Delinquency.

Crunch the numbers and this soon becomes clear … 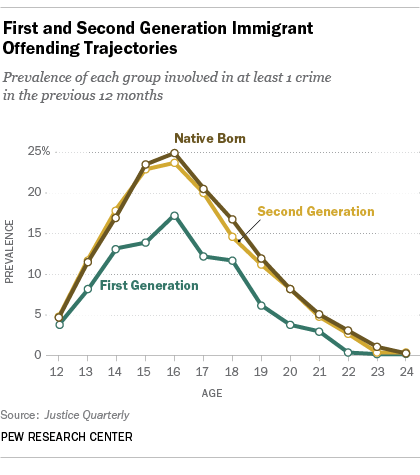 Right across all age groups, 1st generation cause far fewer incidents of crime. The increase within the second generation is them fitting in and syncing up with everybody else …

Other studies have documented how second-generation immigrants have become more like the typical American, both in positive and negative ways. For example, a Pew Research Center analysis of Census data earlier this year found that median family income of second-generation immigrants is virtually identical to the national median and higher than their foreign-born counterparts.  Home ownership rates follow a similar trajectory.

We deport the bad people, that is why it is like this.

One counter argument that might be used to try and explain all of this is a claim that all the bad immigrants are simply rounded up and deported, and that is why those who stay have far lower crime rates.

The National Bureau of Economic Research looked into this precise issue within the paper – “WHY ARE IMMIGRANTS’ INCARCERATION RATES SO LOW? EVIDENCE ON SELECTIVE IMMIGRATION, DETERRENCE, AND DEPORTATION” …

… and the conclusions is …

Our evidence suggests that deportation does not drive the results. Rather, the process of migration selects individuals who either have lower criminal propensities or are more responsive to deterrent effects than the average native.

In other words, the reason that the crime rates are far lower is not because all the bad individuals have been deported, but rather because those that migrate are already self-selected to not be involved in criminal activities.

This is perhaps a cue for some to cite stories about drugs and issues within portal cities.

Is this just cherry picking some data?

Immigration-crime research over the past 20 years has widely corroborated the conclusions of a number of early 20th-century presidential commissions that found no backing for the immigration-crime connection. Although there are always individual exceptions, the literature demonstrates that immigrants commit fewer crimes, on average, than native-born Americans.

Across our studies, one finding remains clear: Cities and neighborhoods with greater concentrations of immigrants have lower rates of crime and violence, all else being equal.

Our research also points to the importance of city context for understanding the immigration-crime relationship. In one study, for example, we found that cities with historically high immigration levels are especially likely to enjoy reduced crime rates as a result of their immigrant populations.

Clearly the new administration is pursuing policies that conflict with what the data tells us.

People can and do respond emotionally, and fear is a very potent emotion that can motivate to such a degree that people will happily discard the facts because they conflict with deeply felt fears and bias.

An example is perhaps the following.

Dr Steve Novella recently posted about Immigration and Crime and lays out the facts very clearly. What then follows within the comments section is quite frankly astonishing. A couple of the commenters quite happily discard all the data and facts, instead preferring to promote the own biases and fears of “them” as the only truth. For example one commenter claims …

These “studies” that claim that immigrants commit crimes at a lower rate than natives is obvious fake science.

That perhaps is the real issue here. people can and do embrace an emotional narrative to such a degree that they will happily discard cold hard facts.

Anyway, to finish, I’ll quote one of Steve’s comments which nicely nails things …

It is irrelevant to the claim that illegal immigrants, once here, cause disproportionate crime. There is no evidence to support this. We should at least get this fact correct to properly inform policy and priorities.

No one here is defending illegal immigration. We have a right to have sovereign borders, to control our borders, and to decide who gets to enter our country. I am highly in favor of legal immigration because the evidence overwhelmingly shows it is good for every aspect of our country (not the focus of this post, perhaps a post for another day).

Despite xenophobia, immigrants are the life blood of our pluralistic open society (which probably hints at why it makes some people uncomfortable).

There is, of course, an optimal rate of immigration. Too much too quickly and it can overwhelm resources and slow assimilation. The wave of refugees into Europe is not optimal immigration, and using it as an example of why controlled legal immigration is bad is absurd.

There is a reasonable balance to be had here, a balance which should be evidence-based, not fear-based.

1 thought on “Do Immigrants cause more crime than others?”