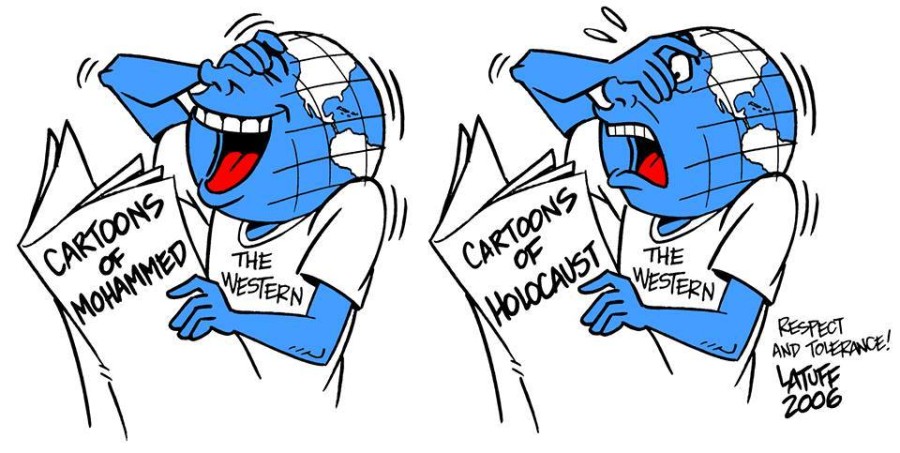 Freedom of speech is a rather important right, and while it is quite easy to support the concept when it is manifesting itself as criticism of ideas we oppose (drawing Mohammed for example), what happens when we are faced with the promotion of things that we find to be highly offensive and utterly absurd – Denial that the holocaust ever took place is an example worth exploring.

First, let’s make one thing abundantly clear, if you do in fact deny that the holocaust took place, then there is a fairly good certainty that you are delusional, because it is a historical fact.

Holocaust denial and the Law

Now this is the bit that disturbs me greatly. I do agree that holocaust denial is a truly repugnant and highly offensive idea, but I do also feel that any attempt to criminalise it is a huge mistake.

The facts are that the promotion of the idea that the holocaust never actually happened is actually a crime in 16 countries, specifically Austria, Belgium, Czech Republic, France, Germany, Hungary, Israel, Liechtenstein, Lithuania, Luxembourg, Netherlands, Poland, Portugal, Slovakia, Switzerland, and Romania. It was once also a crime is Spain, but a 2007 tribunal changed all that there when they declared Spain’s Holocaust denial law unconstitutional.

There have been attempts in other nations to pass similar laws, for example in Holland back in 2006 there was a proposal of a law that would potentially result in one year in jail, and in Italy in 2007 there was a proposal for a sentence of up to four years in jail, both of these thankfully failed. Other nations such as Denmark, Sweden and even the UK have also rejected attempts to criminalise this.

So why are such laws a bad idea?

One argument presented, one that I happen to agree with, is that passing such a law is utterly absurd because it is an attempt to impose historical truth as legal truth, but it is not for this specific reason that I primarily object to such laws.

To gag and censor a man is to perhaps send a message that you fear what he might say, and so that is exactly the message sent when we attempt to stifle and suppress ideas we disagree with. How can we, on the one hand attempt to defend the creation of a cartoon of Mohammed under the banner of freedom of speech, and yet at the same time threaten legal repercussions for those who promote an idea that we in turn deem to be offensive and absurd.

We simply cannot bury bad ideas and pretend that they do not exist. Instead, if we wish to make a real difference, then all ideas need to be granted freedom and exposure so that they may be engaged with, and so it is in that context that the bad ideas can then be exposed as seriously flawed. If factual rebuttals are then discarded and ideas previously exposed as seriously flawed for rational and reasonable reasons, then those that openly persist in the promotion of that  line of thinking can be openly mocked, shamed, and ridiculed into abandoning such absurd assertions – deploy humour and satire, not the law.