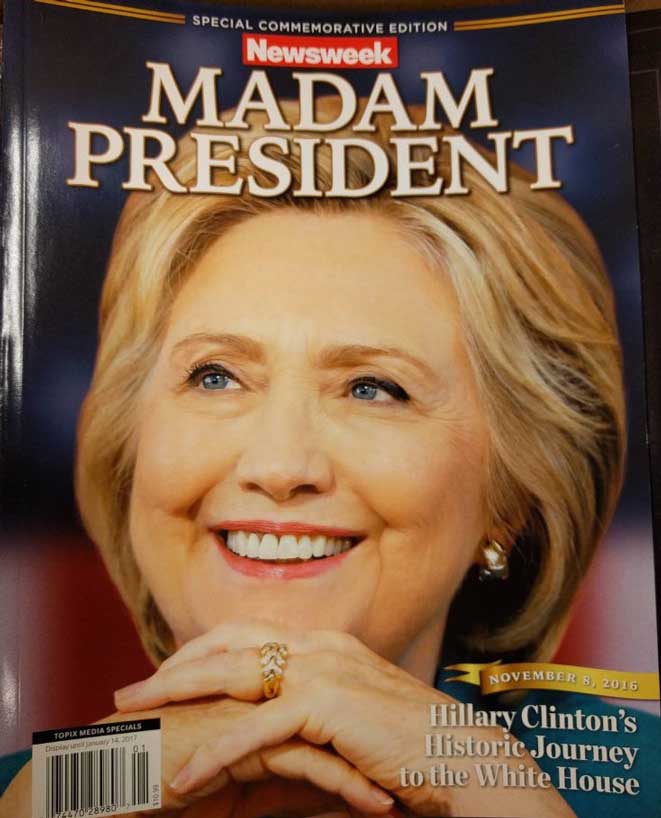 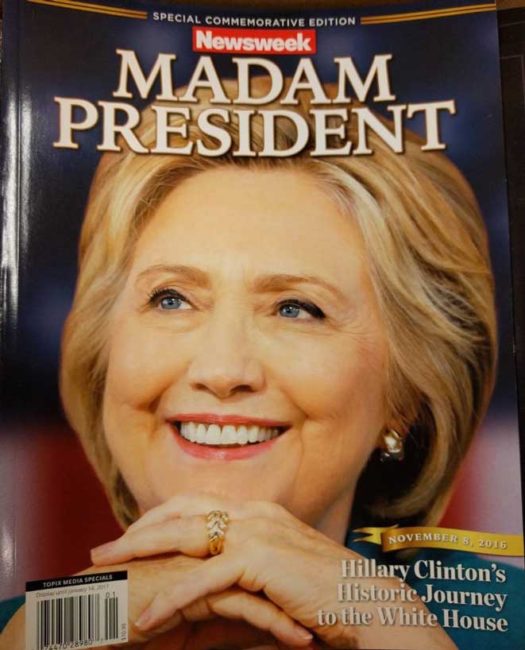 For what are rather obvious reasons this claim is dead in the water, however just prior to the election is was thriving.

It is inevitable that a Hillary would have given it a huge boost and that it would then continue to have circulated for quite some time.

OK, so what was going on here?

It was a claim that the media and Clinton had conspired to rig the election before it actually happened, and as evidence a Newsweek cover was posted.

It spread quickly and inevitably many crank websites such as Infowars picked it up and proceeded to promote the conspiracy claim.

Side note: For the above links I’ve added the “nofollow” tag to each. That is a metadata tag that search engines pay attention to. It basically tells them to not follow that link and to not count it when doing ranking calculations.

The essence of the Claim …

Thousands of copies of a Newsweek magazine claiming a Hillary Clinton victory have been printed in readiness to ship to newsstands and stores.

Stacks of boxes with the Special Edition ‘Madam President’ cover depicting Hillary Clinton winning the U.S. presidential race next week were secretly photographed by a Newsweek employee who says that there were no Trump versions made.

The find proves that the media, in collusion with the Clinton campaign, have planned for a Hillary victory all along.

So was that cover real, or has it been manufactured as a prank or a bit of political theatre?

The cover itself was quite real and was also not “evidence” of any conspiracy.

What is going on here is that Newsweek needed to get an edition out as an almost immediate response to the result and so they prepared two editions.

When Newsweek editor Jim Impoco was shown the Clinton cover along with the conspiracy claims being circulated, he immediately responded by sending the following back … 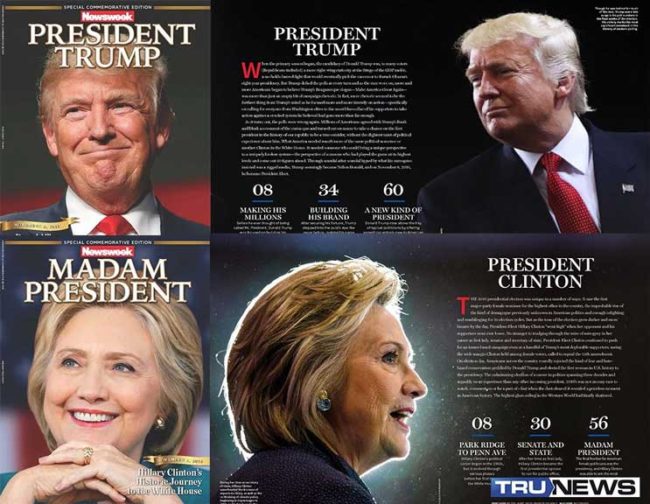 This is not unique to Newsweek or even the media. Where a degree of uncertainty about an outcome exists, it is common practise to prepare for the various possibilities. The example that CNN Money cites is this …

This is the media version of World Series keepsakes that were on sale in Cleveland and Chicago last week. Street vendors printed “Cubs win” and “Indians win” T-shirts, then trashed the Indians shirts after the Cubs won Game 7.

But Why just a Clinton Edition?

There is one further suability here. Note that the source claimed that only a Clinton edition was seen and that there was no sign of a Trump edition. Was the source lying or did somebody simply add that as a bit of political theatre?

Actually no, apparently not, because a business decision was taken to print to most probable result and have that ready. Once again, as explained by CNN Money, this is often how publishers work …

The commemorative editions are actually produced by a separate company, Topix Media, under the Newsweek banner.

“For the past six months Newsweek Special Editions has been piecing together a Road to the White House Tribute Issue for both major party candidates,” Tony Romando of Topix Media said on Monday.

Romando shared the introductory pages of the Trump edition with CNNMoney to prove that both versions exist.

But Topix made a business decision to only print the Clinton version ahead of time given that she is almost universally favored to win the election on Tuesday.

If Trump wins, the Clinton copies will be trashed and the Trump version will be rushed to the printing presses — a simple business calculation, Romando said.

Those sorts of decisions are made all the time in the publishing industry.

So that will be pulped and the Trump version now gets printed.

There was no Fix here, just a sensible pragmatic business choice by the publisher … but we all know that.

It is perhaps understandable why a Trump supporter at Topix observing just the Clinton edition being printed would leap to the conspiracy conclusion. Trump himself has fanned the flames of such thinking and pandered to it, and that quite frankly is why I’m writing about this on a rather bleak day. We can anticipate more of the same muddled myth-thinking to come in the next four years.

Once upon a time we had gatekeepers. Journalists within the media generally adhered to a duty to deeply investigate and so if an article was written, then they were expected to be able to robustly defend the position. It was, and still is, a job that generally demands integrity, honesty, and an ability to perform a robust investigation. Yes there were always exceptions, but generally that was not the norm. The Internet has disrupted much of that and so there now exists a flow of unfiltered myth-information from a vast diversity of different sources, many of which have happily tossed ideals such as integrity and honesty under the bus and instead churn out fiction that is designed to suck in ad revenue by pandering to pre-concieved biases.

There is a bit more to it than just that. There is also the observation that Traditional Republicanism is dead and has been replaced by a regressive modality that panders to paranoia, conspiracy thinking, and mythology. The circulation of this latest urban legend was just one small symptom of that trend, and is one that was leveraged and utilised as a means to manipulate vast swathes of the population.

The different between Trump and all those that opposed him was that if he had lost he would have, as he always does, refused to accept that reality and would have set the mob rolling by leveraging such paranoid myths as “evidence”.

If you have ever wondered what it is like to live in a nation like Turkey where an educated minority live with an ignorant majority memorised and motivated by rumour and myths, then you are about the find out.

Well done US, you just elected a sexual predator into the White House simply because you embraced all the absurd myths that he deployed.