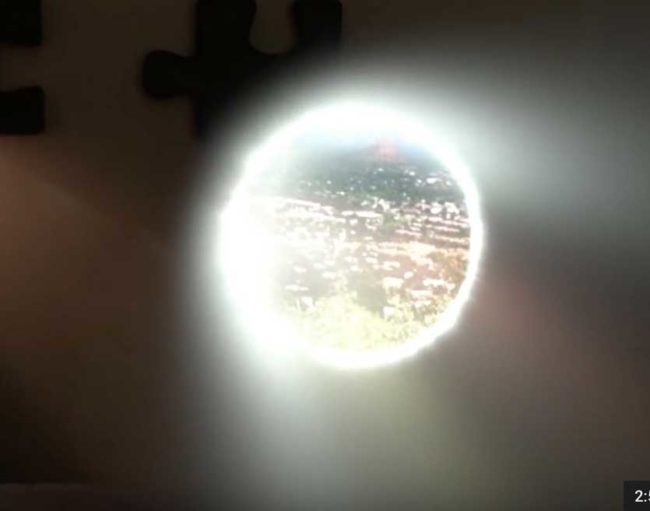 Last august a YouTubber who uses the name FunkyFatHead published a YouTube clip entitled “Gateway to Sedona”. Within this he demonstrates that he can use a frequency generator to open up a gateway in his bedroom to Sedona. It has had close to 1 million hits.

Lots of hits on YouTube leads to a lucrative income via the advertising revenue, but I’m sure that had nothing to do with this “revelation” and that he did not fake it. Insead, he is an honest researcher who gave a demonstration  of something truly amazing in his bedroom … right?

We all know that YouTube is a totally reliable source and you can have complete confidence in everything you see there?

(My apologies for not only tripping but breaking your Bullshit detector when it went off the scales as you read the above).

What is a rather sad indictment of society in general is the observation that many of the commenters under that clip are taking this seriously. However, what is also equally encouraging is that many happily declare it to be BS.

Many of those more recent commenters who are declaring it to be BS are also pointing to Captain Disillusion as the reason for their skepticism.

OK, let’s get into that then.

Alan Melikdjanian, an independent filmmaker and founder of a video production company, runs a very creative YouTube channel under the name Captain Disillusion. Within his regularly published YouTube offerings, using comedy and the Captain Disillusion persona, he takes you though various YouTube clips that supposedly present something truly jaw-dropping or apparently supernatural. He explains exactly how special effects are done, and how you can know that it is a special effect and not real.

Here is his debunking of the Gateway to Sedona that was published just a few days ago. The text under it reads …

Captain Disillusion deconstructs the portal video and explains the concept known (only to himself) as the “piecemeal paranormal”. Creators discussed:

After just a few days on YouTube he already has 362,000 views, and that is well deserved because this guy truly does earn each and every single cent of revenue via advertising or via his Patreon feed. Yes it is also very entertaining, but he is also opening people’s eyes and teaching them to be a lot more skeptical and that, in the age of “fake news”, is a very valuable public service.

You might want to consider subscribing to his YouTube Channel or even supporting him via his Patreon feed.

Side Note: he does not knock up his YouTube clips in a few hours. Instead, a great deal of thought along with heaps of special effects are used to construct some truly very entertaining debunking of nonsense. Doing that takes time and effort and so he only has about 1 or perhaps 2 per month at most.

Comments under the above include these 10 that I randomly picked …

I love how you take an obviously fake video, and still make it interesting to debunk- and THEN, you add MORE research on top, and a new argumentation on top of it! You’re not content with a simple debunk, you’re pushing as far as you can. I find this very inspiring. Absolute quality content not just because you’re naturally entertaining, but also because you work your ass off and respect your audience, and yourself!

You deserve so much more! I love your channel, so well edited and written it just astounds me that the Paulers have more subscriptions. You are one the best channels on here!

The editing in this video. God damn

I was wondering why CD picked such an obviously fake case to debunk, but then the real theme of the video emerged. Excellent work Captain. That ending, heck. Feels. To many more

Entertaining, insightful, and thought-provoking video. Hilarious, and yet a serious call to use reason once again. It should be clear why we need Captain Disillusion now more than ever.

Absolutely superb! Still blown away by the amount of work that goes into these. Everyone watch this again and appreciate how many shots have vfx or motion graphics, plus all the research and writing required. All produced within *a month*. Staggering.

If you check him out then I promise that you will not be disappointed.

Disclaimer: This posting is a wholly independent recommendation. I do not personally know Captain Disillusion and have no financial interest in promoting his YouTube channel. To put that another way – I love what he does. If you read this blog then I think you might also feel the same way.