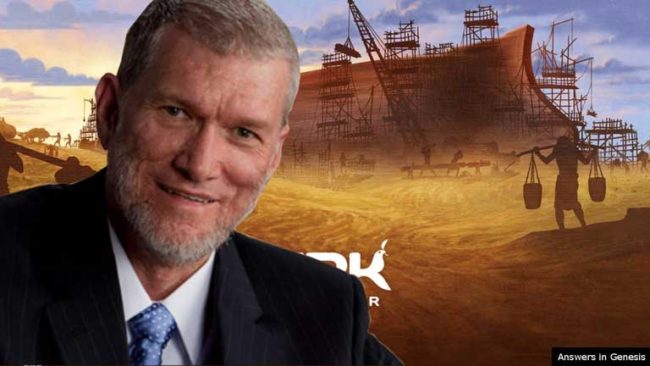 Young earth creationist Ken Ham, the chap who is famous for spending over £100 million to build a life-sized replica of Noah’s ark, is on twitter. If you tap into his feed then you will discover that while you will not be informed, you will at times be entertained by his quirky eccentric tweets.

He believes some rather strange things, and that of course is fine, because believing whatever you wish, even if it is abundantly clear to the vast majority that it is obviously nonsense, is a basic human right. We call that “Freedom of Thought“. That however does not in any way restrict us from laughing at it all, and that aspect is perhaps what makes Mr Ham’s tweets quite mesmerising and entertaining.

The point of this posting today is to criticise Mr Ham’s rigid literalist reading of one specific religious text as the ultimate infallible “truth” that trumps anything and everything else. The vast majority of religious people do not adopt such an approach. That is of course understandable because once you walk down this literalist path, you end up embracing a series of beliefs that conflict with reality. Most adopt the far more pragmatic approach of generally viewing such texts as metaphorical meaningful poetry rather than literal historical truth, and so when faced with stories such as Adam and Eve, it would be viewed as a symbolic expression of our fragile humanity.

The Bible is an important text that has had a huge cultural impact and can be appreciated as literature. In a similar manner we can also read and enjoy Greek, Celtic, or Norse Mythology. As is now well illustrated by Mr Ham, dealing with any of it as an infallible history text will lead to conclusions that are not factual.

OK, so below are several recent Bible vs Science tweets from Mr Ham that have popped up. The essence of his claim is that the Bible trumps science, hence when faced with a conflict between evidenced-based scientific knowledge or a mythological Bible story, he opts to reject empirical evidence and instead rolls with the myth …

The Bible is actually a textbook of historical science & and the only such textbook that is totally reliable, infallible–it is God's Word

From his viewpoint the definitive yardstick for truth is that if the bible says it, then it is literally true. Anything, and he really does mean anything at all, that conflicts with it is false.

The net effect of all this is that he ends up believing rather a lot of utterly bizarre things. For example …

Mr Ham’s rebuttal when challenged about any of this is to pull out his bible. That is his documentation and “evidence”.

When faced with the prevailing scientific consensus on either cosmological or human origins, Mr Ham rather famously likes to say “Were you there?”.

His position is that there is what he deems to be “observational” vs “inferred” knowledge and that unless you have actually observed it then you simply can’t rely upon it being true at all. There is much that could and should be said as a rebuttal to all of that, but perhaps the most meaningful reply is to simply apply his own standard for truth to his own beliefs. When it comes to his assertion that the universe is only 6,000 years old, and that Noah really existed, then he has simply inferred this by assuming that the bible is literally true. His “Were you there?” standard applies just as equally to his own claims.

Science is open for Modification

The claim that scientific knowledge is fluid and that biblical truth is static and unchanging is the essence of his tweets. It also grossly distorts what science actually tells us and how it works.

There are a couple of rather important points to perhaps appreciate.

Firstly, science is not a body of knowledge as such, but instead is a methodology that can be deployed to work out what is and is not wrong. It enables us to gain a knowledge and understanding the way things are, hence it has yielded us considerable benefits.

Secondly, and this is a rather important point, science does not declare anything to be right. Instead, it simply identifies the things that are not wrong. That is a distinctly subtle but vitally important point. In other words, our evidence-based understanding is open to modification. A good example of this is perhaps Newtonian mechanics, more commonly referred to as classical mechanics. It worked well, and functioned as an effective tool. In fact it still does, but it turned out to not be the entire story because as our understanding grew via better instruments, we became aware of subtleties that it did not explain, and so we now have relativistic mechanics.

So is the bible infallible?

Mr Ham repeats that claim in all three tweets. It is his claim and so it is up to him to provide evidence that proves this.

What is fascinating is that this is a wholly testable claim that can, and is, demonstrated to be wrong.

Since we are on Genesis, and Mr Ham’s organisation is called “Answers in Genesis”, then here are a few Genesis related observations …

I’m still mulling over the first few verses of the first of 66 books within the bible and already we are finding that this “infallible” text is not exactly infallible.

It’s not even an original story, and is instead an almost word-for-word ripped off copy of an older Mesopotamian myth – the Enûma Eliš.

Those that believe in Genesis as divine literal historical truth will of course not only deny this, but will also dream up convoluted mental gymnastics in order to explain all of the rather glaring discrepancies. This is inevitable because that is what is required to enable the belief to remain intact, and due to the high emotional investment, the alternative would be unthinkable. It really is not a problem at all to rationalise it and square the circle. If you believe in magic, then simply plugging in a bit more magical thinking to explain such discrepancies is not a huge psychological leap.

Mr Ham, the Guy who deems science to be unreliable, types his “Science is unreliable” claim into a device that is a product of science …

… and now you need to go buy a new irony meter.

What Mr Ham believes to be true is very much on par with other myths such as unicorns and flying fire-breathing dragons.

Now you might perhaps be tempted to criticise me for comparing the bible to myths about unicorns and fire-breathing dragons, but before you leap into the comments section below to suggest that, you should first know that the bible specifically mentions both of those. Since Mr Ham believes the Bible to be literally true, then he must also embraces the idea that Unicorns and also Fire-Breathing flying dragons are real.

Here is the link to his Answers in Genesis page that promotes the idea that flying Fire-Breathing dragons are real.

You might wonder where all the dragons have gone. He has an answer …

man most likely played a role in the demise of dragons, as we read in the legends of dragon slayers.

You can insert your face-palm here.

Here is a link to his Answers in Genesis page that promotes the idea that unicorns are real.

If you are indeed embracing the idea that Mr Ham is right and all of modern science is wrong, then I can only wish you well as you strive to embrace the idea that unicorns and flying fire-breathing dragons are real – good luck with that.