The AutismOne conference was greatly disrupted by a couple of skeptics who jumped up on stage carrying banners proclaiming “Death of all purveyors of Woo”, so they were ejected … er no, that is not quite right, so let us step back and get the facts right.

AutismOne is woo central for the anti-vax movement, this is the conference for the folks who believe that Vaccines cause Autism. There is one little problem with that belief, it is not true, there is no evidence for it. Many studies have been conducted and all conclude “No evidence”. Much of the current anti-vaccine hype comes from a chap called Andrew Wakefield who wrote a paper that linked vaccines to Autism, but a few serious problems later emerged. He had huge financial conflicts of interest and he also faked the data, so his paper was redacted and he was struck off the medical register for ethics violations (he cannot call himself a Dr in the UK anymore). So how did the AutismOne folks react when this happened last year? They gave him an award. Now that in itself tells you all you need to know about the credibility and ethics of these folks. 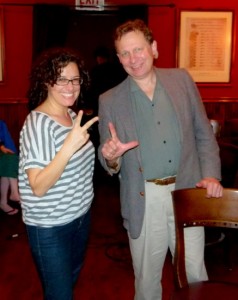 What happened this year is that skeptic, Jamie Bernstein, and Journalist Ken Reibel (pictured here) registered and attended, but were spotted and rapidly ejected by 3 security guards and 4 police officers. They were just quietly attending the talks, taking notes, when … as described by Jamie

As we walked back into the convention, Ken pointed out a few women who were giving him shocked looks — he thought he was recognized.
…

I stopped at a booth that was selling hyperbaric chambers for autistic children and got out my camera to take a picture. Immediately, the director of AutismOne, Teri Arranga, was at my side telling me that pictures were absolutely not allowed. I apologized and told her I hadn’t realized that since it wasn’t written anywhere and I had seen people taking pictures all day. She said it was on signs all over the conference and offered to show me. I agreed, so she got her friend to go grab one of the signs.

The sign they showed me said that audio and video recordings were not allowed, but said nothing about still photography. When I pointed this out, Teri snapped that it was on a different sign and sent her friend to go grab that one. Her rudeness was starting to make me nervous, so I continued to apologize for taking the photo, said I believed her about the sign, promised to delete the photo and asked if I could leave. She ignored all that and instead asked me if I knew Ken Reibel. I said that I did since I wanted to cooperate and be honest.

That’s when hotel security showed up. With no explanation, Teri left Ken and me with three confused officers. I kept asking if I was in trouble, but the guards just responded that they weren’t sure what it was about but had been asked to watch us.

A police officer walked up to Ken and me and said, “Are you aware that you have been asked to leave?” We both replied that no one had previously mentioned kicking us out, but that we would cooperate and go if they wanted us to. From our point of view, it seemed like Teri must have told the police that she had asked us to leave and we refused. This never happened, though.

At this point, Teri said she wanted my camera film… which is kind of a strange thing to ask since this is 2011 and most cameras don’t use film anymore. I told her I didn’t have film, but would be happy to delete the pictures I took. The police officer said that would be fine, but Teri would have none of it. With a shaking voice, she snapped “No, I demand the film!” I said (again) I didn’t have any film, it being a digital camera and all, but took my camera out and erased the two pictures that were on there. She seemed unhappy with this result, but was unable to overturn the police decision.

At this point, Teri and a police officer took Ken aside and I was questioned by the remaining Lombard police officers. They took down all my personal information and kept asking me paranoid questions like “Are you a journalist?” “Do you work for a magazine?” and “Who sent you here?” I answered all questions truthfully, though they weren’t happy with the answers. They seemed convinced I was some big-shot reporter for a magazine and kept harping on that point as I continued to deny such a thing. I kept asking the police if I was in trouble or if I’d done something wrong. They told me I wasn’t in trouble but that they just had to take down my information.

When Teri got back with Ken and the other police officer, we were told that we were being given a trespassing warning and would be arrested if we came back.

So there you have it, you have now been warned. If you ever dare to show up at AutismOne and simply don’t agree with their viewpoint, they will call the police and have you ejected … not for asking awkward questions, or even expressing a different view, but simply for being there and not thinking the same thoughts … truly a very Orwellian moment.

Finally, here are a couple of great links for you all …

Update: Here are a couple more great links (Thanks Liz)

49 thoughts on “Booted out of AutismOne”