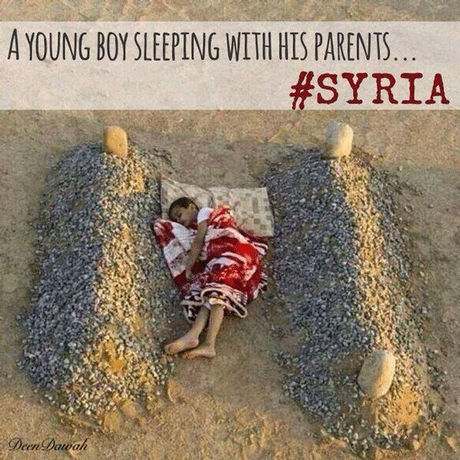 It paints an utterly tragic picture and so it touches the heart. Upon finding it many then tag and forward it … the result – it goes viral.

One slight flaw – it is fake and not at all what it claims to be. As reported in the Independent …

An image of a child purportedly lying between his parents’ graves in Syria that exploded on Facebook and Twitter was actually a staged photo taken as part of an art project.

The graves were not graves but piles of stones, the orphan was not an orphan but the photographer’s nephew, and the image itself was actually taken in Saudi Arabia.

The truth behind the picture, which was appropriated by people on social networks this week to reflect the tragic situation in Syria, was unearthed by Harald Doornbos, who interviewed the photographer Abdul Aziz al Otaibi on his blog.

Al-Otaibi said he was shocked by how the picture had been ‘twisted’, given that he made it very clear that the graves were fake when he posted it on Facebook.

OK, so what on earth was going through his head to create such a picture, what was the “art” here? The reporter asked him about this, and the reply makes a lot of sense to me …

“Look, it’s not true at all that my picture has anything to do with Syria,” he said. “I am really shocked how people have twisted my picture.”

“I love photography,” he continued. “Every artist has ideas in his head. So I had the idea to make a project whereby I show in pictures how the love of a child for his parents is irreplaceable. This love cannot be substituted by anything or anybody else, even if the parents are dead.”

“I am really very annoyed by this. It is just not fair to take one of my photos totally out of context and use it for your own propaganda.”

Once he was aware of what had happened, with some help from the reporter, he tweeted the first to re-purpose his picture and asked him to correct it. He received the response: “Why don’t you just let go and claim it is a picture from Syria and gain a reward from God.“.

Now that is a consistent pattern I have seen before, there is an irrational belief in play here, one that considers lying to be just fine if an appropriate end that enables the belief to thrive is achieved. This covers a rather broad spectrum of beliefs and includes both political and religious beliefs, but tends to thrive within many strands of Islam where being truthful to other Muslims is encouraged, but lying to non-believers is just fine and often encouraged if it helps the belief.

The internet has opened up a vast new flow of information, and so we now all have access to things we would not previously have had access to, and that includes both religious and also political propaganda, so it is vital when swimming in the sea of information to be highly skeptical.

How can you check?

OK, you have been presented with a picture, and you have some serious doubts regarding the claimed context, what can you do to check?

It may not always work, but if indeed an image has been lifted and simply re-purposed, then you have a good chance of tracking down the original and finding the real context for the image.

As an example, here is a great posting by a chap who did exactly the above and then posted the results that illustrated how pictures had been re-purposed for Islamic propaganda.

What if the above does not work?

You can still simply ask questions …

If nothing verifiable is available, then the claim should be dismissed, because this is where an old latin proverb (below) should be remembered – if the claim cannot be verified in any way, then why should you believe it?

If you do not wish to be tricked by click-bait propaganda, then I recommend that you should adopt a skeptical stance.

FYI … here is another picture from the same photo session …