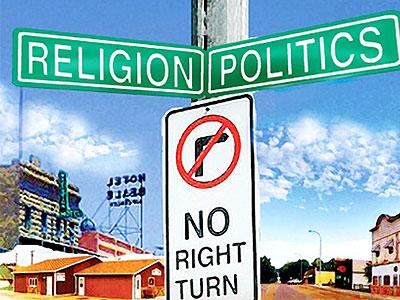 This is not a posting about how things should be, but rather is a potential insight into what people are thinking. Pew have published a new poll that reveals the results of asking people about religion in general terms.

Titled “Americans Have Positive Views About Religion’s Role in Society, but Want It Out of Politics“, and published on 15th Nov reveals … well, the title of their posting gives that away.

For some this latest trend is good, but for most this development is bad because they see religion as a positive force in society. At the same time most also believe that religion should stay out of politics. However, do the answers given actually tell us anything meaningful at all?

Let’s jump into the details.

Religion Needs to stay out of Politics

What is perhaps rather disturbing are the large numbers of people who think that religion should indeed promote a specific political position. But what is this really telling us?

What is not so clear, but is of course obvious, is that people will naturally lean towards their own views and beliefs. If a variation of religion that just happens to align with their belief is promoting a political position that aligns with their political views then that will be warmly received. If it conflicts, then not so much.

The problem with such surveys often rests with the questions. If you ask “Do you think churches and religious organizations have… “, then what exactly does that mean, what are you measuring?

To put that another way, when the question asks about “churches” does the person answering identify as a “Christian” who views most variations of Christianity as “Christian”, or would they hold a very narrow view that deems the vast majority of churches to be man-made and wrong and only their specific variation is the right one.

The point is this – what is being measured here is potentially very subjective, so I’m not exactly sure what the results actually tell us.

Let’s explore their other primary highlight.

Religion is a force for good

Once again let me welcome you to the station named “Vague Central”, we got here by passing through “subjective junction”.

There is no ducking the observation that the way that people interpret specific terms will influence how they answer. Pew have a go at breaking things down a bit and so so we can get insights into those that responded such as their political leanings, what specific variation of belief that they identify with, how old they are, etc…

Does that help resolve my problem here?

Perhaps it does to some degree.

Rather obviously again, for the religious, religion is a force for good, and for the non-religious, nope.

Let’s drill into one example.

Note that from the above the majority of Catholics view religion as a force for good. In the context of clerical abuse and the associated coverup, that’s not exactly a factual position to hold, but rather is a position that perhaps reflects a lifetime’s worth of emotional investment in the organization. Many who are truly horrified would perhaps rationalise what happened as “a few bad apples” and that the majority are fine decent clerics. They quickly brush over the fact that there was, and still is, an orchestrated coverup. The point is this – what you are getting is opinion that is very clearly influenced by belief and not reality.

What other Insights do we have?

How people view “them” is however interesting …

There is a great deal of data here, and much of it is interesting. I think however you get my point. Vague open-to-interpretation questions will yield insights, I’m simply not sure about how meaningful and insightful the answers are.