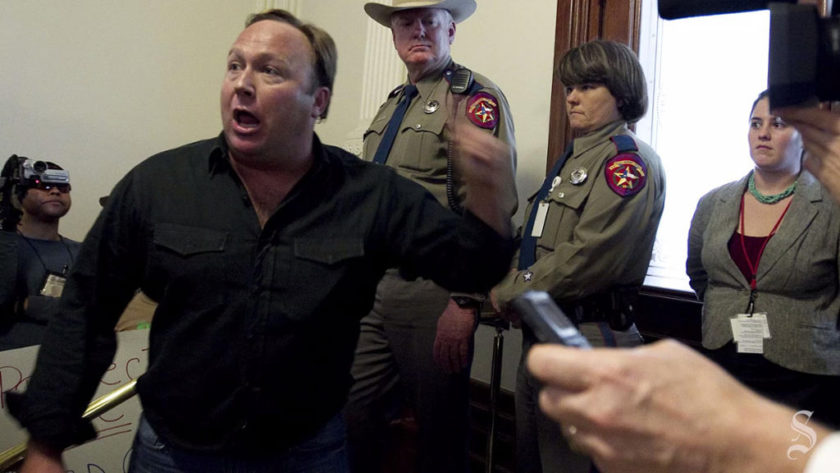 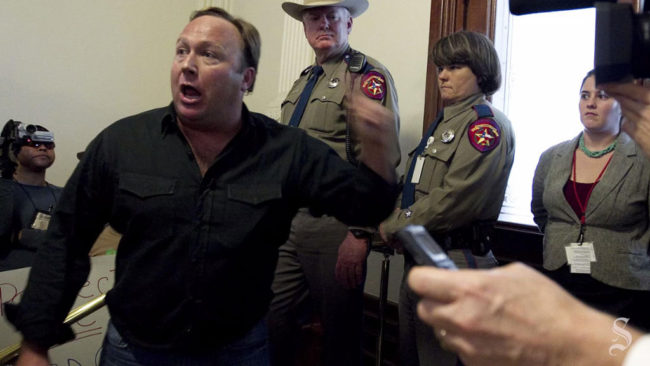 Generally, anything and everything said by Alex Jones can be happily ignored. He is well-known for making some truly extraordinary and utterly absurd claims that are bereft of any evidence. In other words …

If somebody presents a claim, but provides no evidence for it, then it can be dismissed. It is not your responsibility to argue against something that has not actually been verified in any way at all.

Mr Jones is your classic shock jock who is driven by the need to provoke a reaction and so truth, honesty, integrity, or for that matter, evidence, are all very much out of scope. Specific examples of his claims includes …

His trademark is that of the angry guy who shouts and yells. A rather revealing example of that is this …

On June 9, 2013, Jones appeared as a guest on the BBC‘s television show Sunday Politics, during a discussion about conspiracy theories surrounding the Bilderberg Group meetings with presenter Andrew Neil and journalist David Aaronovitch. A critic of such theories, Aaronovitch implied that they either do not exist or that Jones is a part of them himself. Jones began shouting and interrupting, and Andrew Neil ended the interview, describing Jones as “an idiot”[66] and “the worst person I’ve ever interviewed”.[67][68] According to Neil on Twitter, Jones was still shouting until he knew that he was off-air.[66][67]

It would tend to very much illustrate that he is simply putting on an act when the cameras are pointing in his direction.

I’m perhaps in some ways reminded of the tale of somebody picking up a copy of some sermon notes and discovering that at one point the fire and brimstone minister had scribbled in the margin at one point, “argument weak, shout loudly here“.

The specific item that motivates me to write about Alex Jones concerns a rather revealing insight that has come to light via his on-going custody case. He had three kids with his ex-wife Kelly Jones whom he divorced in 2015. In the past few weeks she started a lawsuit seeking custody of those three kids, and the argument for this was as follows …

“He’s not a stable person,” she said of the man with whom her 14-year-old son and 9- and 12-year-old daughters have lived since her 2015 divorce. “He says he wants to break Alec Baldwin’s neck. He wants J-Lo to get raped.

“I’m concerned that he is engaged in felonious behavior, threatening a member of Congress,” she said, referring to his recent comments about California Democrat Adam Schiff. “He broadcasts from home. The children are there, watching him broadcast.”

Now here comes the kicker. As a rebuttal, his lawyer Randall Wilhite told state District Judge Orlinda Naranjo that it is all an act …

using his client Alex Jones’ on-air Infowars persona to evaluate Alex Jones as a father would be like judging Jack Nicholson in a custody dispute based on his performance as the Joker in “Batman.”

“He’s playing a character,” Wilhite said of Jones. “He is a performance artist.”

Who would be actually gullible enough to buy into his BS?

Rather a lot of people, and surprise surprise, that includes the new new President of the United States  …

During the campaign and into his presidency, many of Trump’s most defining themes and questionable assertions either originated with or were popularized by Infowars: Hillary Clinton for prison. Hillary Clinton is gravely ill. Bill Clinton is a rapist. President Barack Obama founded ISIS. The election is rigged. Millions of immigrants voted illegally. The news media covers up terrorist attacks. The “fake news media … is the enemy of the people.” Obama spied on Trump.

In December 2015, thanks to Stone, Trump appeared via Skype on Jones’ show.

“Your reputation is amazing,” Trump told Jones. “I will not let you down.”

Since Trump became president, Jones has purported on air to be in regular direct telephone contact with the president, apologizing for not always being able to answer the phone when the president calls. Last week, Jones said that the president had invited him to Mar-a-Lago

His YouTube channel has over 2 million subscribers and more than 1.5 billion views. He broadcasts on over 150 radio stations and has millions of global listeners tuning in each month. His InfoWars brand is not only potent, but is also so commercially valuable and that it has perhaps trapped him within this bubble of misinformation and paranoid fiction. Truth and honesty are very much out of scope because that would seriously damage the brand.

Should we ever believe him?

Those that follow him might indeed view him as a prophet for our age and buy into much of what he says, but what this trial reveals is that he himself is telling you that he is simply a showman and that it is all an act. If indeed when he himself says in a court of law that it is all a sham and that he plays a role, then this is perhaps the one time to take him at his word and believe him.

Will those that hang off his every word do that now?

Probably not, they are too deeply invested emotionally to be able to come to terms with it all being a con.

4 thoughts on “Does Alex Jones truly believe all he says?”