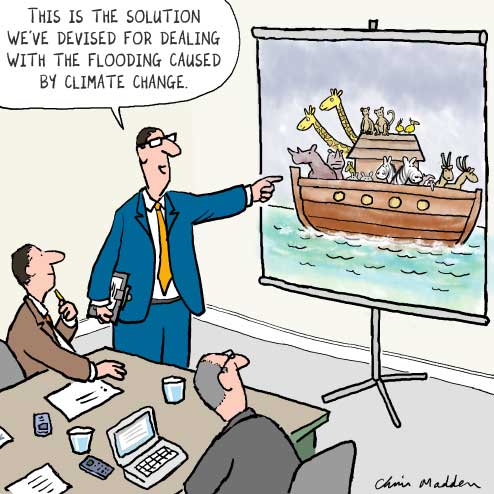 The publication of a “study” that supposedly debunks the prevailing scientific consensus that humans are causing the climate to change has stirred up a bit of attention. Titled “NO EXPERIMENTAL EVIDENCE FOR THE SIGNIFICANT ANTHROPOGENIC CLIMATE CHANGE“, and published on arXiv, the abstract explains that clouds are supposedly the real cause …

In this paper we will prove that GCM-models used in IPCC report AR5 fail to calculate the influences of the low cloud cover changes on the global temperature. That is why those models give a very small natural temperature change leaving a very large change for the contribution of the green house gases in the observed temperature. This is the reason why IPCC has to use a very large sensitivity to compensate a too small natural component. Further they have to leave out the strong negative feedback due to the clouds in order to magnify the sensitivity. In addition, this paper proves that the changes in the low cloud cover fraction practically control the global temperature.

The use of the word “Prove” in an abstract is a bit of an immediate red flag.

As you might perhaps anticipate, various climate deniers have grasped this as vindication of their denialist stance …

Er yes, the above is “that” Paul Watson, the conspiracy theorist nutter. Best thought of as “Alex Jones lite”.

This paper is like nectar for all of these climate deniers.

There is however one tiny little flaw here, the paper is complete and utter bollocks.

What is wrong with this paper?

There are three rather immediate problems that leap out.

Issue 1: All they have is a Correlation

The answer is that they have not done that.

How did they establish that it is not an increase in global temperatures that drives the correlation?

Once again, the answer is that they have not done that.

Good practise is to publish sufficient details within a paper to enable others to verify and also replicate the results.

What dataset have they used for global cloud cover?

Nothing is cited or mentioned, and so we have no way to validate this. Apparently, we just have to trust them.

What research has been conducted for their proposed mechanism that drives the climate?

They claim that the rise of CO2 is not human caused but instead comes from the ocean. This is not something that they have established within their paper. They simply cite it as if it was a fact as follows …

The major part of the extra CO2 is emitted from oceans [6], according to Henry‘s law.

They also claim that an increase in relative humidity causes global cooling, but they don’t explain how that actually works either.

This is not Peer Reviewed Research

What do subject Matter Experts think of this?

In short, not much.

Via here, are a few longer answers …

The unpublished paper by Kauppinen & Malmi is deeply flawed and the claims that (1) CO2 has caused only 0.1 degC of warming and that (2) only 10% (0.01 degC) of this warming is from human activity are both unsupported claims.

The paper should not be relied upon.

Their claims are based on a chain of reasoning with multiple flaws:
(1) They claim that climate models cannot be relied upon but do not demonstrate this.
(2) They instead make a new climate model (despite this being in contradiction of (1)).
(3) Their new climate model is unvalidated. It is based upon datasets of cloud and humidity without any sources given and which are not up-to-date. They provide no assessment of the accuracy of the data used—these variables are very difficult to measure on a global basis over the time period used. No physical basis is given for their new climate model (e.g. no process is given for how higher relative humidity can make the globe cool).
(4) They fail to consider cause and effect. For example, they assume without any support that a decrease in relative humidity is natural. They give no reasons why it would have decreased. They fail to consider whether climate change could have caused relative humidity to change.

(5) They state without any support that most of the atmospheric CO2 increase is due to emissions from the oceans. They ignore anthropogenic CO2 emissions which are more than large enough to explain the full increase. They ignore observational evidence that shows that the oceans are net sinks of CO2 at present, not net sources.
(6) They dismiss the entire body of climate science—especially that there is a significant greenhouse effect—and instead cite their own work (unpublished or published in journals outside the field).

In reality there is strong scientific evidence for conclusions in stark contrast to those of Kauppinen and Malmi, namely that (a) all of the CO2 rise is from human activity, (b) that 100% of the CO2-induced warming is therefore anthropogenic, and (c) that (together with anthropogenic emissions of other greenhouse gases like methane) the total anthropogenic warming is around 1 degC.

From a logic perspective, this effort makes two utterly unjustified assumptions:
(1) That any changes in low cloud cover are natural, rather than human-induced. The research discipline of aerosol-cloud interactions exists to explore this relationship; and the charlatans selling cloud-seeding would argue vociferously against all cloud changes being natural.
(2) Correlation = causality. Just because two time series show a strong correlation, does not mean that one causes the other. In fact, I’ve no idea why the authors think reducing cloud cover drives warming, rather than the over way around. The IPCC report, (Boucher et al1, cited by them) states that warming causes low cloud cover. An enlightening example to highlight this kind of error is the correlation between the number of storks and birth rate in Europe2.

But this article also misses some important hallmarks of real science:
(1) It gives only one reference to research by other scientists.
(2) Even this is a mis-application: they authors neglect to include any time-variation in their equation. This effectively assumes that the Earth responds instantaneously to any drivers.
(3) They explicitly state at the outset that they do not consider models as evidence.
(4) They do not explain where their data has come from (I guess though that the cloud cover has come from satellite irradiance, processed through a model).
(5) They infer meaning well-beyond the scope of their data, without any justification.

Errors in this manuscript include:

(1) The climate model comparison shows the opposite of what Kaupinen & Malmo claim.

(2) Their assumed warming effects of CO2 are much smaller than we’ve measured.

(3) They say that clouds and humidity are causing all the temperature change but satellite measurements suggest, if anything, the opposite.

(4) Humans caused the CO2 rise and the oceans are absorbing CO2, this is changing ocean pH. Kaupinen and Malmi falsely say the opposite: that oceans are adding CO2 to the air.

There’s tons of observational evidence that human activity is driving global warming, and this data supports the projected range of ongoing and future global warming. The Kaupinen and Malmi conclusions are based on misrepresenting research, ignoring most of the evidence, correlating things then mixing up what causes what, and using false numbers.

Climate models simplify and apply the laws of physics to calculate Earth’s climate. Include human pollution since 1880 and they show global warming as observed, but if you only include natural changes (e.g. in the Sun and volcanoes) they calculate almost no warming. Kaupinen and Malmi’s article is totally confused and thinks this shows that the models can’t be trusted. It actually shows that if our physics is right then most observed warming is due to human activity.

The biggest single factor is increasing carbon dioxide (CO2) levels in the air. This is a gas that traps infrared heat trying to escape Earth and warms us up. Venus has many times more CO2, and it’s the main reason its surface is hot enough to melt lead. We’ve measured CO2 heating Earth1,2 and Planck’s Law tells us that this would directly warm Earth by about 300% more than assumed by Kaupinen and Malmi3.

Most of their article talks about changes in clouds and humidity. Physics tell us what to expect from clouds, and satellites have measured these changes4,5. We’ve also measured tropical clouds getting higher6, low clouds retreating when it warms7, and changes in ice and liquid mixtures in clouds8.

Finally, after using a bunch of nonsense calculations to say that 0.1 °C warming is from CO2, they say that 90% of the change in CO2 is caused by the oceans. This violates conservation of mass from basic chemistry13: the oceans are actually absorbing CO214,15 which, again, is the complete opposite of what Kaupinen and Malmi claim. Without claiming the opposite of reality, their conclusions cannot be supported.

There are multiple more detailed rebuttals from many others, all saying more or less the same, including …

Not one single respected subject matter expert finds this paper to be credible. The only people who do are those who don’t actually understand the science but instead find it useful for the promotion of climate denialism.

Tweets on the Clouds Paper

Meanwhile the liars such as Russia Today and also Fox News are promoting this seriously flawed paper.