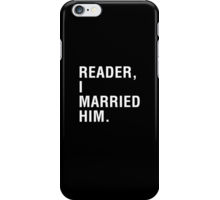 Today is not such a serious day, and so I bring you a small little twitter story of love and romance.

Back in 2012 twitter book lover Victoria O’Brien became quite enchanted by whoever was behind the smart funny and humorous tweets emerging from the Oxford St Waterstones bookstore’s twitter account, and so she tweeted this …

well I'm in love with whoever is manning the @WstonesOxfordSt account. Be still my actual beating heart.

Now to leap forward to just a few days ago, she tweeted this …

As is appropriate for a bibliophile, the “Dear reader, I married him” is a very very famous literary quote. It comes from “Jane Eyre” which is of course by Charlotte Bronte.

As an aside, that line not only gives Jane Eyre a happy ending, but was actually at that time a deliberately shockingly and very progressive statement. A more traditional Victorian and expected variation might have been the passive “Reader, he married me”, be no, it clearly states something distinctly different, she was not being acted upon, but was instead taking action … “Reader, I married him”, and that not only shocked her readers, but perhaps also explains why the phrase is still such a well-known literary reference today.

You know you want the whole story now … right?

Worry not, because the Telegraph did the legwork and has it all …

Relaying the Twitter conversation to a friend, the then-Victoria Carlin was offered a bet: to win a date with the man behind Waterstones Oxford Street within two weeks.

But despite her efforts, she failed to meet the time limit, later messaging another fan of the account with a typo that would change her life.

Instead of chatting about her would-be date with the Waterstones account manager – a still imaginary future prospect – the data analyst accidently sent a cheery message describing how they had been for a gin together.

Intrigued, Mr O’Brien, who at the time was seeing someone else, then got in touch from his personal account to clarify what had and had not happened.

The pair struck up a conversation, which progressed to Victoria taking donuts as a gift to the Waterstones store.

After a first date at a cocktail bar, the couple embarked on a relationship and, two-and-a-half years on, Mr O’Brien proposed at their London flat.

The couple officially have now married at Islington Town Hall, with a reception at the Londesborough pub in Stoke Newington and a week-long honeymoon in Brighton and Cambridgeshire.

“It’s been very odd being on the other side of the story,” admitted Mr O’Brien, who now works in social media for Innocent, the smoothie business. “It’s weird being the one who’s going viral.

Meanwhile Waterstones has an offer for you …

This popped up yesterday …