Now here is a nice poster that has been circulating. Many of those who dare to embrace doubt see it, click “Like”, and then share it in turn with others, and so it, or some variation of it, continue to circulate. 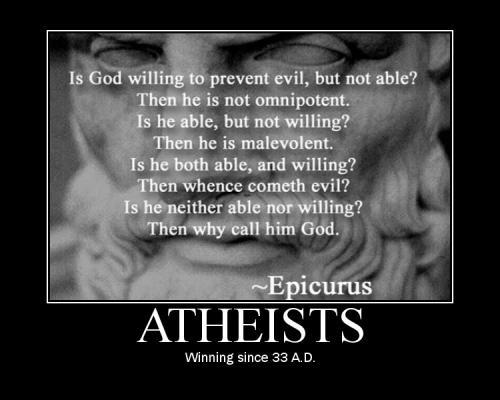 There are however a couple of things that bother me here. Now please do not misunderstand, the argument is sound, that is not my quibble, no there are two other problems

Problem 1: For this instance note the date, the claim that “Atheists have been winning since 33 AD”. Well, the problem with that is that Epicurus was born in 341 BC and then died in 270 BC. Did he mysteriously rise from the dead in AD 33 to pen this? Perhaps the argument was not a sound argument until 33 AD.

OK, that is a minor quibble, and perhaps is intended to be a reference to the origins or Christianity. If so, then a far stronger observation is that the argument pre-dates Christianity by several centuries, and is still a solid argument today.

The other problem I have here is perhaps a far stronger objection to the presentation of this argument.

Problem 2: Epicurus did actually write this, it is not his at all. Yes, it is commonly believed to have been written by him, and has been believed to be his for quite some time, but there is no solid evidence that it was.

What appears to have happened is that Lactantius, an early Christian writer viewed Epicurus as an atheist (ref: Mark Joseph Larrimore, (2001), The Problem of Evil, pages xix-xxi. Wiley-Blackwell), and so wrongly attributed it to Epicurus

“Oh“, you might say, “Why are you quibbling about all this, since we don’t really know and the argument itself is sound and has not been rebuffed after all these centuries, why not attribute it to him?”. Well, here is the problem. Those of us who do not believe, take that stance due to the lack of any actual evidence for the claim that he did, we make the observation that people are believing stuff that is not actually true. Yet here we are doing exactly the same … believing stuff that has no evidence, and promoting it as true – Epicurus, did not actually compose this, and it was not written in 33 AD.

Are you a doubter now?

Well I once believed that it was first authored by Epicurus, but I no longer do, and I suspect you will also now have a similar change of mind, and that is good.

Are you offended in any way?

When I discovered that I had incorrectly attributed the quote to the wrong person, I was not offended, but instead was happy to learn something new.

That is what being open minded means, there is no dogma, no insistence upon a specific strand of thought and damn the evidence, but instead a keen interest in finding out about the things that are actually true and letting go of the things that are not. There are of course core ideas that we sometimes cling to and cherish because we have a cultural or emotional bond that can be difficult to let go of. If we recognise that and embrace a modality in which we start to ask ourselves questions such as, “Is this really true?”, and “How do I know it to be true?”, then we can make good progress on the task of discarding the things that are false and finding out the things that really are true.

Incidentally, even if Epicurus did not write it, the quote is still quite good, and so I’d love to know who did actually write it – does anybody know?

1 thought on “Problems with the famous Epicurus quote”