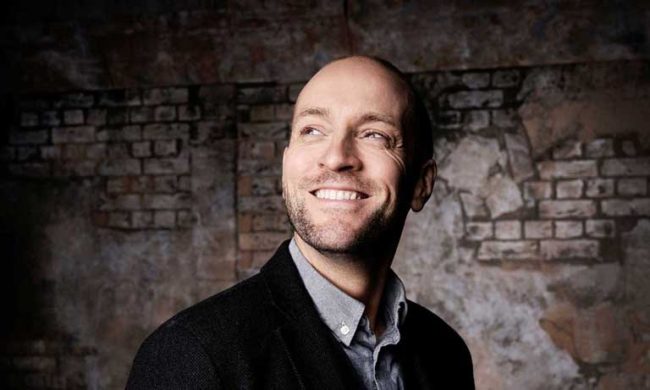 This is from last September and I’ve just found it. As a bit of background …

I’m pulling out a few bits from the article on it all here, not to highlight the article itself as such, but instead to illustrate how it is possible to interact with people who hold a fundamentally different view of the world.

When Brown pulls back the curtain on how susceptible we are to being fooled, it’s only natural for his audience to be left as sceptical as he is about the supernatural. The unsettling question that remains for the religious onlooker is: ‘Could I be imagining all this after all?’

It turns out that Brown is delightful in person, and my initial nerves are soon settled. I crack a joke about him turning me into an atheist by the time we’re done, which he bats away with a roll of his eyes. ‘Boring!’ he laughs. Apparently, the mind control is reserved for stage and TV.

… but they soon settle down, and so this is how things progressed …

Despite expecting no more than 30 minutes of his time, I end up chatting with him for more than an hour and a half. Despite our differences, we get on like the proverbial house on fire. Brown is engaging, self-deprecating and funny, yet he takes seriously the matters we discuss: why he lost his Christian faith, the evidence for the resurrection and whether his manufactured miracles disprove the divine. Sometimes it’s more like a debate than an interview, but I get the sense that he enjoys talking through theological issues that once mattered to him with someone for whom they still matter.

Justin Brierley, the author and also senior editor of Premier Christianity magazine, does a good job with the article. It is long, but worth a read to see how the non-believer is viewed from the other side of the fence.

His faith started to wane at university in Bristol, where Derren fell in love with the stagecraft of illusion and hypnosis. His fellow Christians were not as enthusiastic and warned him off the pursuit, even turning up at one of his first stage shows to pray in tongues loudly at the back.

His training as an illusionist had made him realise he was prone to the same confirmation bias (counting the hits and ignoring the misses) that he recognised in psychics, astrologists and all manner of other belief systems he rejected.

‘I thought the difference [was] that there has to be an objective, historical, factual event like the resurrection that separates [Christianity] from just being a subjective circular belief,’ says Brown.

However, when he investigated the historicity of Christ’s resurrection, Brown came away convinced that the evidence he had hoped for wasn’t there (an issue we debated at some length during our conversation). In the end, there was no drawn-out crisis of faith; Brown says he shrugged off his former beliefs remarkably quickly.

A good hypnotist could make someone believe they areGod, but that doesn’t prove that God doesn’t exist; just that we are capable of being fooled. Christianity doesn’t consist only of subjective emotional experiences. There are also rational, objective reasons to believe in God and the truth of Christianity. Brown’s main targets are those whose faith resides almost exclusively in experience over evidence.

However, in his Miracle stage show (which began its run in 2015 and is due to air on TV this December), Brown took things even further. Prepare to be amazed, but also to encounter a very specific and uncomfortable challenge to charismatic Christianity.

The second half is where the show’s religious dimension really takes off. Having given an introduction to what he regards as the corrupt industry of prosperity preaching TV healers (Benny Hinn comes in for specific criticism), Brown himself adopts the persona of a healing evangelist. The audience is invited to ‘just go with it’ by participating in an extended exercise involving bright lights and motivational music intended to flood us with feel-good emotions. Then, those who believe they have experienced some sort of healing are invited forwards. A queue of volunteers quickly forms at the side of the stage.

Numerous people testify to ailments that have been healed: short-sightedness is cured, tinnitus disappears and a man with a sprained foot is able to walk without any pain. Brown is often able to identify the problems before he is told them and calls out illnesses in the audience that are being healed (a ‘word of knowledge’ in charismatic parlance). No stooges are used, we are told, and I’m inclined to believe him. Apparently, the only person acting is Brown who, backed by the organ strains of an old-time gospel song, seems to relish the role of speaking in tongues, casting out demons and slaying people in the spirit. For most Christians it will come across as mocking at best and blasphemous at worst, though Brown says the target of his act is to send up the charlatans and frauds, not sincere believers.

Ultimately, I’m left feeling amazed but also uncomfortable. Evidently, by creating a euphoric state in the audience, Brown has been able to replicate much of what occurs during a typical charismatic healing rally.

Now that is simply fascinating. He does not tell people it is all fake, but instead clearly illustrates that it is by successfully and effectively simulating what happens within these religious meetings, not under the banner of religion, but instead as an illusionist.

Despite it all Mr Brierley clearly does still believe in miracles, but that is perhaps to be expected because a change of mind would cost him his job and income.

All the above extracts come from his introduction, most of the article itself is the long Q&A section and is worth a read.

It is also interesting to observe that Mr Brierley feels the need to inject into the article a panel of suggested reading, which is the usual stuff … for example, C.S.Lewis and William Lane Craig.

OK, so I have a couple of points here …

However, what is indeed very impressive is the manner in which Derren Brown conducted the interview. He clearly was open, honest, and not confrontational, but instead friendly. He left the author with the distinct impression that they got along very well.

Bottom Line: When engaging with people who do hold a distinctly different view, you don’t need to be an obnoxious dick about it. Instead you can be friendly, open, honest and engaging. Not only are people generally not persuaded by being yelled at that they are stupid and ignorant. Even if you are truly convinced they are, often that is not actually why they embrace the view they do. If you take the time to listen to their story then you might find out what is really going on.

In the case of Mr Brierley, he has a career as the senior editor of this Christian magazine, hence due to that emotional investment he is deeply immersed within his belief and will be unable to let go without giving it a lot of thought over time. What might help is having a friend whom he can confide in and talk to about it all.