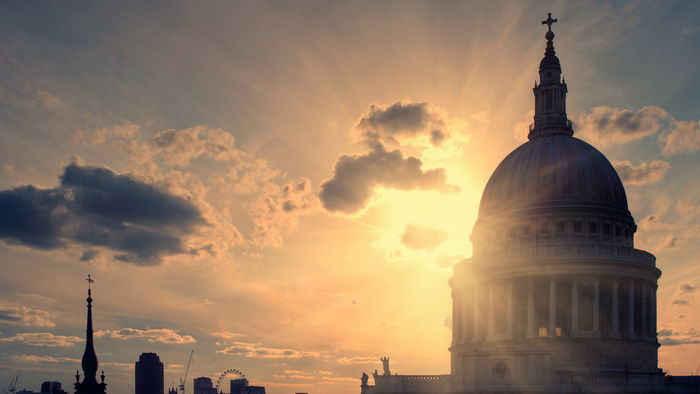 If the current trend of US religious decline continues, and that is a very distinct probability, then you can project ahead and work out how things will potentially change in the next decade or two. This has been done by a Computer Scientist and it has yielded the following insights …

You might think that this simply could not happen, but look back and remember that in 1990 the number of people with no religious affiliation was 8 percent and today it is 22 percent. What has already happened is a very dramatic change.

What will also be fascinating to see is how this manifests itself in future elections. Remember that the GOP have very much jumped into bed with the religious right and so as this trend continues to unfold it will perhaps inevitably impact them.

Details from the Scientific American Article

Allen Downey, a Professor of Computer Science, has an article within Scientific American in which he lays out the implications of the current trends within the available GSS data that has been collected since 1972 …

The following figure shows changes since 1972 and these predictions, based on data from the General Social Survey (GSS): 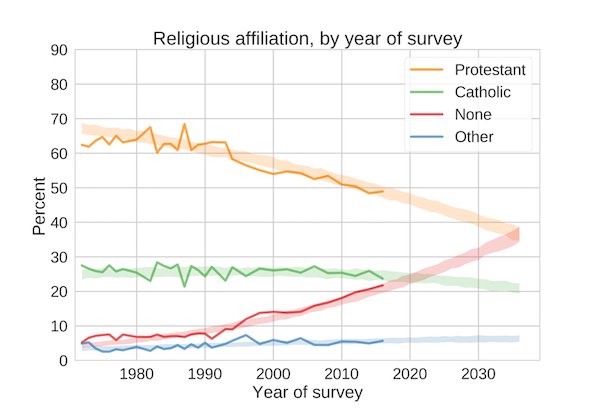 Prof Downey has a longer version of his article available on his own personal blog. There he sums things up as follows …

One very interesting observation that he draws out from the data is a view of the generational change. If we group people by their year of birth then it gives us an interesting insight into this demographic shift. We often inherit our beliefs from our cultural context, and so the observation that many born since 1980 have a distinctly different cultural inheritance is one way of understanding the momentum of this ongoing change … 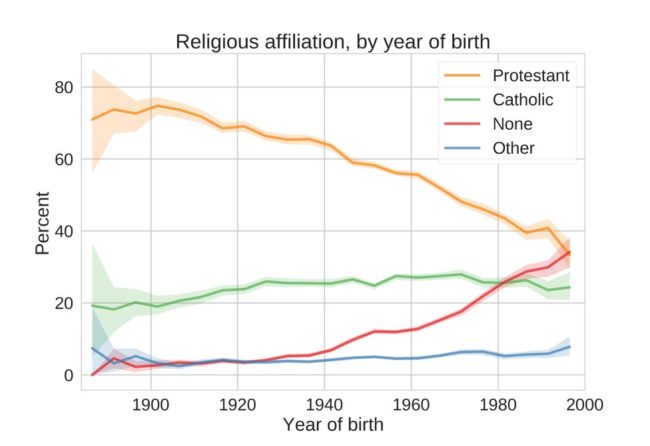 How Credible is his projection?

Social changes are generally unpredictable. At any point another “Great Awakening” could reverse these trends. But among social changes, demographic predictions are relatively safe; the events they predict have, in some sense, already happened. The people who will turn 40 years old in 2037 are turning 20 this year, and we already have data about them. The people who will turn 20 in 2037 have been or soon will be born. So these predictions will only be wrong if current teenagers are more religious than people in their 20s, or if current children are being raised in a more religious environment. But in both cases, the opposite is more likely to be true.

It is always possible that as people age they become more religious, but because we have GSS data going back to 1972, it is possible to see if this actually happens, so he does examine and consider that possibility.

Another way to test things is to take the data up to 2006, discard all data after that and then project ahead to now and see what it predicts. Then measure that result against what actually happened. He did exactly that and this is what he got … 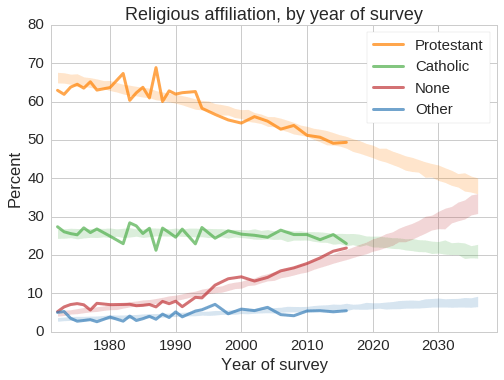 He has a lot more within the longer posting within his blog, and there he examines a lot of data in detail. If interested, then it is worth checking out.

It is worth remembering that it is simply a projection that looks at the ongoing trend and not an actual prediction. It is still however a credible projection because when you drill into the numbers you discover that it is the older generation that tends to be far more religious than the younger generation.

What we have is a younger generation that has been exposed to a vastly increased flow of information that leads them to be far more skeptical and to think more analytically about religious claims. As time passes and the older more religious generation fades away this ongoing trend is inevitable.

These predictions will be wrong if current teenagers are more religious than people in their 20s, or if current children are being raised in a more religious environment.  But if those things were happening, we would probably know.

Will the religious decline simply continue down to zero?

Now this is where I speculate, but I suspect not. Instead the demographic shift is simply adjusting to the new reality of the Internet age and so it will not be a continuous linear curve, it never has been so we should not anticipate that it will do that. While the numbers of nones will greatly increase, belief itself will do what it always done and will adapt. New variations of belief that reflect our cultural reality will be naturally selected and so religion will most probably continue to thrive.