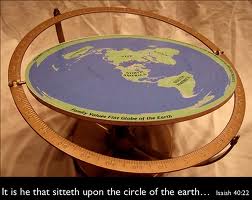 A dialogue between two different views might imply that they can meet somewhere in the middle, but sadly that is not how reality works, quite often one side is simply wrong … period.

I’m thinking about God claims, belief vs non-belief, but this applies to many other topics as well.

To examine this thought let us look at it using a less heated topic. There are still some who truly believe that the earth is flat, (yes really). You, like most others, not only consider this view to be wrong, but also utterly crazy  and would (quite rightly) not consider it to be a rational view.

Yes, for some it is a joke, but sadly some of them truly believe and are being very serious. They have a wiki, and they have a FAQ. Just to give you an idea, here is the type of stuff you will find …

Q: “When traveling in a straight direction, you will always reach the same point on the globe from where you started. How can this happen if the world is flat?”

A: The Earth is in the shape of a disk, as seen below. When one circumnavigates it, one is actually moving in a circle around the North Pole.

Q: “What about satellites? How do they orbit the Earth?”

A: Since sustained spaceflight is not possible, satellites cannot orbit the Earth. The signals we supposedly receive from them are either broadcast from towers or any number of possible pseudolites. However, temporary space-flight is possible.

Q: “NASA and other world space agencies have pictures of the Earth from space, and in those pictures the Earth is clearly a globe; in this day and age, hasn’t it been proven beyond any doubt that the Earth is round?”

A: NASA and the rest of the world’s space agencies who claim to have been to space are involved in a conspiracy to fake space travel. The pictures are faked using simple imaging software.

“Oh come on now, they are taking the piss, this is a parody” … perhaps, but that is not my point. People can and do believe crazy things that have no evidence at all, it is part of what makes us human. Notice that they are rationalizing an utterly insane view. Notice also how you feel about such rebuttals, it is clearly wrong for many reasons, yet try your best to engage, and you will be faced with nonsense like this. You know that I’m really talking about religious belief, the stuff that has exactly zero credible evidence for all it’s supernatural claims … no exceptions, yet those that embrace such thoughts have apparently rational reasons for doing so.

“Ah but perhaps there is some truth to it all, after all, the belief in a God is so common and so many do believe”.

OK, lets go back to the flat earth folks, is there some truth to what they claim, if we have a chat would we discover a middle position, where the earth is not as round as you think it is and that perhaps there really is a degree of flatness you were not aware of? Of course not, they are simply wrong … period … there is no middle ground here. If most people actually believed it, would that change anything? Once most people did indeed believe in a flat earth, was it actually flat back then, has the earth gone through a sudden transformation since then?

Now back to the god question. Perhaps they are partially right and the non-believers are partially right, there is not an entire god, but a divine finger does exist, the rest does not. No, it is not like that at all, that is crazy, either something is true and there is evidence to verify that it is true, or it is not true.

To give you an example of how silly the attempts to rationalize can get, I was recently faced with this …

“In order to say there is no God, you must know the whole definition of God.”

Bollocks, there is no requirement to parse utter insanity in order to reject it. Notice what is going on in the above, there is an attempt to shift things about as follows…

No, they don’t get to do that, all such attempts should be dismissed.

Lots of people might indeed think it is all true, but that changes nothing, reality is not something we get to vote on. While I do of course respect the right of people to believe whatever they wish, I will also at the same time not hold back from mocking such insanity, there is no middle-ground here. If they wish to assert a claim, then they need to provide evidence, and until they can do so, all such claims will be dismissed as utterly nuts.

2 thoughts on “Flat Earth: Sometimes there really is no middle ground”