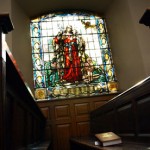 While she was attending a family baptism … (ah the things we suffer for family) … all was apparently going as would be expected, but then this happened  …

A charming elderly gentleman, whom my parents had long known, proceeded to the lectern to lead us in prayer. I wish I’d paid more attention, for I cannot now remember how he led up to the fateful words asking God to help us in the fight against “the rise of secularism and the aggressive atheists”.

“He’s talking about me,” I thought. I don’t mean to be aggressive, and I don’t believe aggression is called for, but I have certainly been dubbed one of those aggressive atheists before now. So it’s to be a fight, is it? With us secularists as the “forces of evil”, the “wiles of the devil”. Are we to be countered with armour, breastplates, shields and swords?

Later over the usual C of E after service tea and biscuits, she was able to have a quick chat with him …

I took my chance to ask him what he meant. And he meant it as a fight all right. But the really scary thing was what he thought we wicked secularists were up to – we apparently want to prevent him worshipping, destroy his faith and banish Christianity from the face of the earth. I explained that I don’t want to stop him worshipping or destroy his faith. As a secularist, I am quite happy if people carry on with their religious practices as long as these do not give them special privileges in the affairs of state. As a humanist, I think we should rely on ourselves, not on an invented god. As an atheist, I would be delighted if people stopped believing in their various gods, and stopped believing their religion was right and everyone else’s wrong. But I do not want to fight them over it unless they try to impose it upon the rest of us.

So there you have it, a quick insight into the mindset of some believers … and what scary misinformed thinking it is.

I’m very much with Sue on this, I’m quite content for people to believe whatever they wish, but will strongly resist anybody attempting to force that belief on others. Now, the truly strange thing here is that I find that I have a great deal in common with these believers. No, not the hostility bit, that’s quite frankly weird. Let me put it like this, I don’t believe in Apollo, Thor, Loki or any of the other numerous Gods that used to be very popular, and these fine C of E folks also don’t believe in them, so the primary difference here is that I just happen to believe in one God less than they do.

If perhaps they stopped and considered their reasons for rejecting all the other Gods they choose not to worship, then perhaps they might begin to understand why I reject their God as well. Does my rejection imply I’m aggressive? If so, then they also are being just as aggressive in their rejection of all these other Gods. Nope, the use of the word aggressive simply does not fit, so I challenge its deployment by believers.

OK, what they are really getting a tad ticked off about is that non-believers are challenging religious privileges. Why should we tolerate the head of the Church of England also being head of state, why should we tolerate a House of Lords stuffed with elderly Bishops, in precisely what way does devoting your life to a mythological supernatural being qualify you for such a seat of power to lord it over the rest of us? And so by questioning such a privileged status, secularists get plastered with the label “aggressive”.


So, if some folks start labeling you an “aggressive” atheist … be skeptical … its not about world domination, we just want an even playing field.