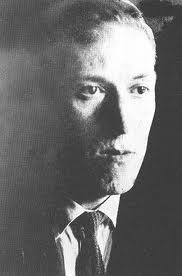 In 1918 H. P Lovecraft at the age of 28 wrote the following letter to his friend Maurice W. Moe

Your wonderment “What I have against religion” reminds me of your recent Vagrant essay—which I had the honor of perusing in manuscript some three years ago. To my mind, that essay misses one point altogether. Your “agnostic” has neglected to mention the very crux of all agnosticism—namely that the Judaeo-Christian mythology is NOT TRUE. I can see that in your philosophy truth per se has so small a place that you can scarcely realize what it is that Galpin and I are insisting upon. In your mind, MAN is the center of everything, and his exact conformation to certain regulations of conduct HOW EVER EFFECTED, the only problem in the universe. Your world (if you will pardon my saying so) is contracted.All the mental vigor and erudition of the ages fail to disturb your complacent endorsement of empirical doctrines and purely pragmatic notions, because you voluntarily limit your horizon—excluding certain facts, and certain undeniable mental tendencies of mankind.

In your eyes, man is torn between only two influences: the degrading instincts of the savage, and the temperate impulses of the philanthropist. To you, men are of but two classes—lovers of self and lovers of the race. To you, men have but two types of emotion—self-gratification, to be combated; and altruism, to be fostered. But you, consciously or unconsciously, are leaving out a vast and potent tertium quid —making an omission, which cannot but interfere with the validity of your philosophical conceptions. You are forgetting a human impulse that, despite its restriction to a relatively small number of men, has all through history proved itself as real and as vital as hunger—as potent as thirst or greed. I need not say that I refer to that simplest yet most exalted attribute of our species—the acute, persistent, unquenchable craving TO KNOW. Do you realize that to many men it makes a vast and profound difference whether or not the things about them are as they appear?…

I recognize a distinction between dream life and real life, between appearances and actualities. I confess to an overpowering desire to know whether I am asleep or awake—whether the environment and laws that affect me are external and permanent, or the transitory products of my own brain. I admit that I am very much interested in the relation I bear to the things about me—the time relation, the space relation, and the causative relation. I desire to know approximately what my life is in terms of history—human, terrestrial, solar, and cosmical; what my magnitude may be in terms of extension,—terrestrial, solar, and cosmical; and above all, what may be my manner of linkage to the general system—in what way, through what agency, and to what extent, the obvious guiding forces of creation act upon me and govern my existence. And if there be any less obvious forces, I desire to know them and their relation to me as well. Foolish, do I hear you say? Undoubtedly! I had better be a consistent pragmatist: get drunk and confine myself to a happy, swinish, contented little world—the gutter—till some policeman’s No. 13 boot intrudes upon my philosophic repose. But I cannot. Why? Because some well-defined human impulse prompts me to discard the relative for the absolute. You would encourage me as far as the moral stage. You would agree with me that I had better see the world as it is than to forget my woes in the flowing bowl. But because I have a certain momentum, and am carried a step further from the merely relative, you frown upon me and declare me to be a queer, unaccountable creature, “immersed…in the VICIOUS abstractions of philosophy!”

Here, then, is the beginning of my religious or philosophical thought. I have not begun talking about morality yet, because I have not reached that point in the argument. Entity precedes morality. It is a prerequisite. What am I? What is the nature of the energy about me, and how does it affect me? So far I have seen nothing which could possibly give me the notion that cosmic force is the manifestation of a mind and will like my own infinitely magnified; a potent and purposeful consciousness which deals individually and directly with the: miserable denizens of a wretched little fly speck on the back door of a microscopic universe, and which singles this putrid excrescence out as the one spot whereto to send an only-begotten Son, whose mission is to redeem those accursed fly speck-inhabiting lice which we call human beings—bah!! Pardon the “bah!” I feel several “bahs!,” but out of courtesy I only say one. But it is all so very childish. I cannot help taking exception to a philosophy that would force this rubbish down my throat. “What have I against religion?” That is what I have against it!…

Now let us view morality —which despite your preconceived classification and identification has nothing to do with any particular form of religion.Morality is the adjustment of matter to its environment—the natural arrangement of molecules. More especially it may be considered as dealing with organic molecules. Conventionally it is the science of reconciling the animal Homo (more or less) sapiens to the forces and conditions with which he is surrounded. It is linked with religion only so far as the natural elements it deals with are deified and personified. Morality antedated the Christian religion,and has many times risen superior to coexistent religions. It has powerful support from very non-religious human impulses. Personally, I am intensely moral and intensely irreligious. My morality can be traced to two distinct sources, scientific and aesthetic. My love of truth is outraged by the flagrant disturbance of sociological relations involved in so-called wrong; whilst my aesthetic sense is outraged and disgusted with the violations of taste and harmony thereupon attendant. But to me the question presents no ground for connexion with the groveling instinct of religion. However—you may exclude me from the argument, if you will. I am unduly secluded though unavoidably so. We will deal only with materials that may presumably lie within my feeble reach. Only one more touch of ego. I am not at all passive or indifferent in my zeal for a high morality. But I cannot consider morality the essence of religion, as you seem to. In discussing religion, the whole fabric must bear examination before the uses or purposes are considered. We must investigate the cause as well as alleged effects if we are to define the relation between the two, and the reality of the former. And more, granting that the phenomenon of faith is indeed the true cause of the observed moral effects; the absolute basis of that phenomenon remains to be examined. The issue between theist sand atheists is certainly not, as you seem to think, the mere question of whether religion is useful or detrimental. In your intensely pragmatic mind, this question stands paramount—to such an extent that you presented no other subject of discussion in your very clever Vagrant article. But the “agnostic” of your essay must have been a very utilitarian agnostic (that such “utilitarian Agnostics” do exist, I will not deny. Vide any issue of The Truth-seeker! But are they typical?)! What the honest thinker wishes to know, has nothing to do with complex human conduct. He simply demands a scientific explanation of the things he sees. His only animus toward the church concerns its deliberate inculcation of demonstrable untruths in the community. This is human nature. No matter how white a lie may be—no matter how much good it may do—we are always more or less disgusted by its diffusion. The honest agnostic regards the church with respect for what it has done in the direction of virtue. He even supports it if he is magnanimous, and he certainly does nothing to impair whatever public usefulness it may possess. But in private, he would be more than a mere mortal if he were able to suppress a certain abstract resentment, or to curb the feeling of humor and so-called irreverence which inevitably arises from the contemplation of pious fraud, howsoever high-minded and benevolent.

The good effects of Christianity are neither to be denied, nor lightly esteemed, though candidly I will admit that I think them overrated. For example,the insignia of the Red Cross is practically the only religious thing about it. It is purely humanitarian and philanthropic, and has received just as much of its vitality from agnostic—or Jewish—sources, as from Christian sources…. These nominally Christian societies usurp the lion’s share of social service merely because they are on the ground first. Free and rational thought is relatively new, and rationalists find it just as practicable to support these exiting Christian charities as to organize new ones that might create a division of energy and therefore decrease the efficiency of organized charity as a whole. And by the way—was not Belgium relief work largely non-religious? I may be mistaken —but all this is aside from my main argument anyway. I am not protesting against the recognition of Christianity’s accomplishments. This has nothing to do with absolute basis of faith.