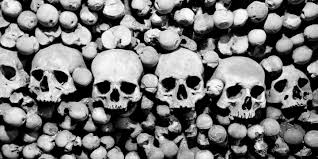 John Mark Reynolds, a rather religious chap, has a posting up that suggests he has rather firmly embraced a rather odd view of 20th century history and appears to believe that atheism is the prime cause of the horrendous genocide that took place. He does not even suggest, or hint, but is very specific about it …

Atheistic regimes killed millions in the last century. Nobody denies this fact

I do, and so do most familiar with the history of it all, it is not a fact as described by him, they were communist regimes that were driven by political fanaticism, and not by a lack of religious belief.

Of course, there are few atheists in most parts of the world. Even Europe is nothing like majority atheist.

… well, only 30% of the UK are religious, the other 70% are not. The UK is not alone, that same study finds that in Japan just 13% of people were religious, Sweden 19%, Czech Republic 23%, and the Netherlands and Hong Kong 26%. Clearly he does not do facts, and to maintain that fantasy based stance he does indeed go on to assert this …

much of the state mass murder of the twentieth century and that is happening now (see China and North Korea) probably have atheism as a cause.

So anyway, what follows in the rest of his bizarre twist on things demonstrates a rather desperate need to demonise people for simply not believing what he believes, and thus he crowbars in his specific interpretation of history to portray a lack of superstitious belief as the prime motivator for genocide.

Clearly history is not his topic, but religious belief is.

Fanatical beliefs, be they religious or be they political, lead to human tragedy, and sadly within the 20th Century that happened on an industrial scale. The assertion that non-belief was the primary motivation for genocide is an irrational religious belief that has no basic in fact, and simply ignores the rather stark reality of the political fanaticism that dominated and drove it all. It would perhaps be as credible as claiming that Christianity was responsible for the Nazis because the vast majority were either Catholics or Lutherans and discarding the National Socialist political ideology that actually drove Nazism.

In the end, his promotion of an idea that has no basis in fact, but instead whips up fear and hatred of a specific group of people who do not believe what he believes is a prime example of the real root cause – the promotion of a “them vs us” narrative in which “they” are deemed evil. In other words, he is not addressing the problem, but rather he is the problem.

I also note that his posting has no comments because he operates a ban-hammer that obliterates any comments he disagrees with (I did try), and that tempts me into thinking “Gosh, how very Stalinist that is”, because unless you adhere to his specific party line, you get purged.