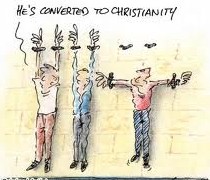 Because I experienced a religious conversion as a teenager, then later in life changed my mind about it all, I’m able to look back and consider what really happens during such a conversion.

If asked during my time as a believer, I would have claimed that it was not simply a personal choice, but was a supernatural intervention, or to translate that into ‘Christian-speak’, God spoke to me by the Holy Spirit and I responded by allowing him to come into my life and make me a new person. Was I lying when I made such claims? No, not at all, I honestly believed it to be true. Yet looking back now, I can clearly see that such a claim is simply not credible. What I thought had happened and what had actually occurred where two very distinctly different things.

So what motivated me to Convert?


My religious awaking involved a Bible Study. My father, the son of a Methodist minister described himself as an agnostic, yet quite often took us all to church on Sundays. This was not because of any specific belief, but rather because it was a great place to interact with others, and was more akin to a social club. He was quite content to hop about and had no allegiance to any specific belief, sometimes it was the Church of Ireland (Anglican). Once, because I had a Catholic friend staying, we went to a Catholic Mass, but most often we gravitated towards the local Presbyterian where the religious bit was almost an afterthought and did not interfere too much with the socializing. During one service the minister announced that there was a Bible study taking place for teenagers and if anybody was interested, then they should ask him for details.

Thinking that it would be a great way to meet others (preferably female … well I was a teenager) I signed up.

The concept conjured up in my mind consisted of images of some elderly Presbyterian lady lecturing a couple of teens in her front parlor, but the reality turned out to be quite different. It was nothing to do with any specific mainstream denomination at all; instead I found a room packed with teens and guitars. This was something different, it was catchy tunes, hands in the air, Holy Spirit, and speaking-in tongues. There were no scripts, no agendas, no rituals, no clergy, and a free-for-all openness; I had never seen anything like it. Ruth, a 20-something led the meeting and talked about how the Holy spirit could come into peoples lives, then we went into open prayer. One girl, Charlie, had a spiritual experience there and then (Quick Translation: they successfully pushed her emotional buttons). As she prayed, she broke down into tears, then quite spontaneously and unprompted went around laying hands on everybody else. Having previously expected a gentle paddle within a sea of blandness I was instead blown off my feet by this emotional typhoon and rapidly sucked in.

Now, what is truly interesting is that as I look back, I can make the observation that the actual details were relatively unimportant. If it had been Hinduism, Islam or for that matter a collection of Greek or Roman deities, I would still have jumped in and embraced it all as “truth”, the precise details were not important. What truly motivated involvement was the opportunity to make a transition from a position of social isolation into a new position of belonging to a group and being accepted as part of the hive mind (think like them, act like them, become one of them)

The religious might indeed attempt an exclusive “spiritual” claim here, but there was nothing supernatural going on. Instead what we actually discover is a psychological trick at work.

If you have also been gripped like this, then it is possible to think your way out of it.

2 thoughts on “Conversion – what does it really mean?”