Padraig Reidy wrote an article is Friday’s UK Guardian about Ireland’s poisonous blasphemy debate. Being Irish born and bred myself, I’m chipping in with a few additional comments of my own.

The context of the article is the latest challenge to the utterly insane blasphemy laws that still currently stand in Ireland. As an aside, what the heck does blasphemy actually mean, especially in the context of every religious belief being blasphemy to every other shade of religious belief, it truly is stupidity incarnate. If pursued to its logical end then they would need to lock everybody up … no exceptions, because every possible position of belief or non-belief will be blasphemy to somebody else. 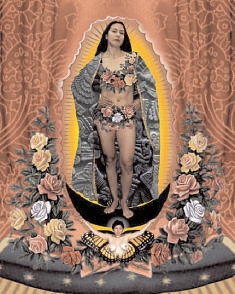 Anyway, the latest challenge is an art exhibit (pictured here) by artist Alma Lopez. She describes it in her own words as …”an image of a 40-year-old woman with her belly and legs exposed standing on a black crescent moon held by a bare-breasted female butterfly angel“. In other words its Madonna in a bikini, so the only shock here is that some folks are offended.

Now perhaps you are wondering why an obscure piece by an unknown (in Ireland) artist is causing such a fuss? Well, you need to remember that Catholicism specializes in manufacturing martyrs, so the hard-core catholics (the few that are left) will be out and ready to be offended at any hint of mockery or criticism of their utterly insane superstitious beliefs.

The article (link coming up soon) describes a radio show that was flooded by believers making silly claims. The best quote I see there comes from Michael Nugent of Atheist Ireland, who explained that countering these silly claims on the show …

was like discussing the rules of quidditch with people who believe Harry Potter was a documentary.

Additionally we have a Bishop who claims the exhibition as “unacceptable“, and added that  “respect for Mary, the mother of God, is bred in the bones of Irish people and entwined in their lives“. To be frank he is nuts. I’m Irish, I was born and educated there (by Opus Dei no less at one point), yet this is not now, nor was it ever true for myself and many many other Irish people that I know.

Now, what makes all this interesting is that this is perhaps the first big challenge to Ireland’s crazy Blasphemy laws. So while the Bishop, and others with a religious interest in doing so, might wish to play the blasphemy card, Ireland needs to come to terms with the stark reality of blasphemy being relative to a specific viewpoint. I, and many others in Ireland, are not offended by this image, but are instead deeply offended by the antics of some crazy fanatics attempting to utilize the legal system to impose their insane beliefs upon the rest of us.

Ah yes, I almost forgot, I did promise the link to the Guardian article, here it is.