When faced with a bereavement that results in deep sorrow and grief, believers deploy thoughts such as “Well at least they are with the Lord now“, and also, “we shall be once again together in the next life“, but how do non-believers cope? To answer this, I do not propose to roll out platitudes or talk abstractly, but instead will take a look at one truly wonderful life and point to it as a practical illustration of how such grief is handled. 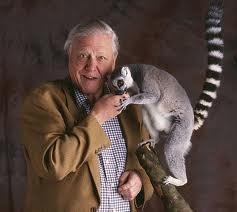 Sir David Attenborough has been famous as the face and voice of BBC natural history programmes  for almost 60 years. Now aged 85 he is still devoted to that profession and is currently off in Borneo filming, and also right now has a new series running called The Frozen Planet.

What are his religious views?

He is not a believer. For example, an article here, quotes him as saying …

My response is that when Creationists talk about God creating every individual species as a separate act, they always instance hummingbirds, or orchids, sunflowers and beautiful things. But I tend to think instead of a parasitic worm that is boring through the eye of a boy sitting on the bank of a river in West Africa, [a worm] that’s going to make him blind. And [I ask them], ‘Are you telling me that the God you believe in, who you also say is an all-merciful God, who cares for each one of us individually, are you saying that God created this worm that can live in no other way than in an innocent child’s eyeball? Because that doesn’t seem to me to coincide with a God who’s full of mercy

So is this a man who is a passionate non-believer? Not really, it is of no importance to him at all, when interviewed he explained here, “It never really occurred to me to believe in God“. This is not a recent de-conversion, he has always been non-religious, in a BBC Four interview with Mark Lawson, he was once asked if he at any time had any religious faith. He replied simply, “No.”

Nobody is immune to tragedy, and at some point we will all encounter it. Tragically 14 years ago Sir David’s wife, Jane, died of a brain haemorrhage. He was recently interviewed about this (here in The Radio Times), where he explained …

In moments of grief – deep grief – the only consolation you can find is in the natural world.

People write to me and tell me this. People of great distinction have written and said, ‘When so-and-so died, the only thing that made life tolerable was to watch programmes on plants and animals’.

And I thought, ‘That’s true for me, yes.’ Because we are part of it and part of a big, enduring thing

Though he spent decades exploring the worlds of plants and animals for his television programmes, Sir David has only recently realised how much it comforted him after receiving letters from viewers.

He was married to wife Jane for nearly 50 years after they met at Cambridge University, until she died in 1997. His daughter Susan now spends much of her time with him at his home in Richmond, Surrey.

Speaking about how he had coped since the death of his wife, Sir David said:

Life changes… ‘easier’ is not the word.

You accommodate things… you deal with things. I’m quite used to solitude in the wilds but, no, an empty house is not what I enjoy. But my daughter’s there.

Sir David said he was like “most people” in finding solace in nature.

Of his own mortality, he said:

“I don’t fear death, but I fear suffering, of course, who wouldn’t? You hope when the moment comes that it won’t last long and it won’t be a trial and tribulation to those you hold dear. But I know perfectly well that I’m not immortal.”

And so I can indeed salute one truly noble man who has given so much to so many, and in the end discovered that what he did for others was also a solace to himself in his own time of grief.