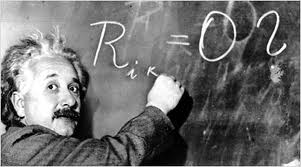 One Einstein quote that appears to pop up on a regular basis is often rattled off as follows:

“Science without religion is lame, religion without science is blind.”

“So there you go then“, chips in the believer to the non-believer, “One of the smartest men is not as dismissive as you are of the importance of belief“.

Why am I bringing this up? Because this very card was played to me recently. There are several problems here with this claim. First, it is a quote that has been mined out of context, and secondly, this “Appeal to Einstein” is a logical fallacy, so we should take a quick look at both of those in turn.

The Quote … back in Context

Often a single isolated clause that has been quote-mined and then presented in complete isolation renders a rather different meaning, so what will happen if we now put this specific quote back into the actual context it has been lifted from? Here it now is back in context …

“Even though the realms of religion and science in themselves are clearly marked off from each other, nevertheless there exist between the two strong reciprocal relationships and dependencies. Though religion may be that which determines the goal, it has, nevertheless, learned from science, in the broadest sense, what means will contribute to the attainment of the goals it has set up. But science can only be created by those who are thoroughly imbued with the aspiration toward truth and understanding. This source of feeling, however, springs from the sphere of religion. To this there also belongs the faith in the possibility that the regulations valid for the world of existence are rational, that is, comprehensible to reason. I cannot conceive of a genuine scientist without that profound faith. The situation may be expressed by an image: science without religion is lame, religion without science is blind.

Though I have asserted above that in truth a legitimate conflict between religion and science cannot exist, I must nevertheless qualify this assertion once again on an essential point, with reference to the actual content of historical religions. This qualification has to do with the concept of God. During the youthful period of mankind’s spiritual evolution human fantasy created gods in man’s own image, who, by the operations of their will were supposed to determine, or at any rate to influence, the phenomenal world. Man sought to alter the disposition of these gods in his own favor by means of magic and prayer. The idea of God in the religions taught at present is a sublimation of that old concept of the gods. Its anthropomorphic character is shown, for instance, by the fact that men appeal to the Divine Being in prayers and plead for the fulfillment of their wishes.” – Extracted from Science, Philosophy and Religion, A Symposium, published by the Conference on Science, Philosophy and Religion in Their Relation to the Democratic Way of Life, Inc., New York, 1941.

Now what is very interesting here is that when he uses the term “Religion” within the above article, he is actually talking about a deep sense of awe and mystery. This is not a superstitious assertion regarding a supernatural being, he makes that abundantly clear. It is this awe regarding the mystery and the assumption that we can find the answer that motivates and drives science to seek out the right answers to these mysteries.

A Muslim presented the quote to me in isolation as support for his specific belief system, but when put back in context, in becomes clear that it is saying something very different.

An Appeal to Einstein

Let us conduct a quick thought experiment. For just one moment we shall assume that Einstein truly believed in a personal God, was a devoted believer, and attended some church or mosque each week. We shall also assume that he expressed this belief and asserted it to be a statement of faith he adhered to.

Would that then make such a belief actually true?

No it would not. Things that are established as true, hold that status because there is evidence that verifies the claim. This evidence can be examined independently and verified … biology, physics, chemistry, maths, etc…There are also things that have not been established as true, and are simply things that people believe, for example, bigfoot, aliens, lake monsters, soul, spirits, psychics, etc… The interesting thing about the second category is that no matter who asserts them to be true, no matter how smart they are, no matter how right they have been about other things, if there is no data to backup the claim, then a skeptical stance remains the most appropriate response.

What I’ve termed, “An Appeal to Einstein” is of course an example of the well-known logical fallacy, “An Appeal to Authority”. You can read more about that here.

So was Einstein actually Religious?

The simply short answer is “no”.

But why take my word for it, let him explain exactly that in his own words. In 1954, an Italian immigrant, Joseph Dispentiere, wrote to Einstein expressing his disappointed after reading an article that portrayed Einstein as conventionally religious. Einstein wrote back to him as follows:

It was, of course, a lie what you read about my religious convictions, a lie which is being systematically repeated. I do not believe in a personal God and I have never denied this but have expressed it clearly. If something is in me which can be called religious then it is the unbounded admiration for the structure of the world so far as our science can reveal it