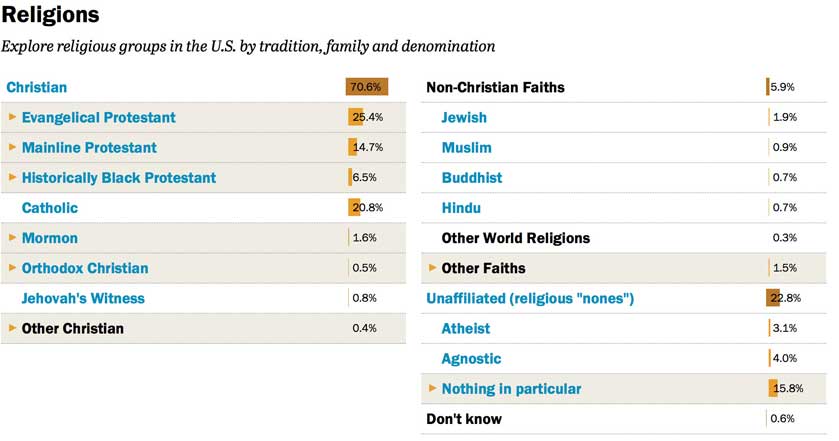 Back in 2007 PewResearch did a comprehensive Religious landscape survey. That was then updated with a repeat poll in 2014. You can find all the online results here. There you can drill down into the specific details for any demographic.

As a quick summary, here are the overall results … 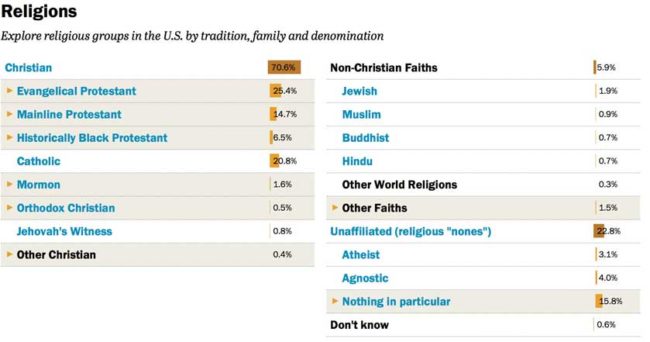 Life has of course moved on since 2014 and so I suspect that the numbers today would be quite different. For example the obnoxious behaviour by right-wing evangelicals, and their vocal and continuous support for a pussy-grabbing casino-running multiply-married grossly-dishonest racist within the highest office demonstrates that they will happily toss all their principles and values under the bus in order to gain influence. For many this incarnation of hypocrisy on steroids has been way too much and has led many to be “repulsed by the increasingly nativist, tribal tenor of both conservative white Christianity and conservative white politics”

Anyway, putting all that to one side, if you drill down into the 2014 results for the Atheist demographic, then as hinted at within the subject line, something very bizarre emerges.

Atheists who are apparently not Atheists

On the front page for the 2014 Religious Landscape survey, you are able to click various demographic groups, and so if you click the word Atheist, then you get the data that was collected specifically for just those that identified as atheist.

There is something very odd here, but before we get into that let’s first understand what the word “Atheist” actually means. It is simply somebody who does not believe there is a God.

That’s it, that is the entire scope.

OK, now we move on to the truly odd observations that pop out from the survey.

There are apparently atheists who do indeed believe in god, and so I have no idea how that works at all. 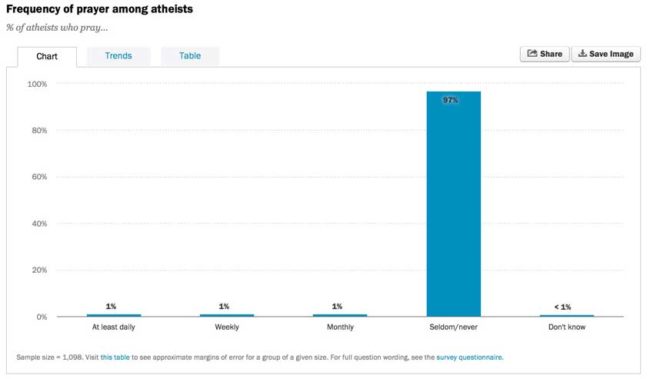 So how do we explain this?

The margin of error when dealing with small data samples of about 1000 people is +/- 4%, so it is tempting to attribute this to statistical error and nothing more. However, if you check the questionnaire deployed, then you discover that they specifically decoupled the word “Atheist” from belief as follows.

What is your present religion, if any? Are you Protestant, Roman Catholic, Mormon, Orthodox such as Greek or Russian Orthodox, Jewish, Muslim, Buddhist, Hindu, atheist, agnostic, something else, or nothing in particular?

… and if the answer was vague, the interviewer was directed to nudge them to be a bit more specific …

Note the that they did not ask, “What do you believe?”, but instead, they are asking people to select a specific tag.

Quite distinctly separated from that they also asked the God question …

What is really going on is clear

If you apply the actual definition of “atheist” as people who do not believe, then the actual number of atheists is rather obviously 9%

If however, you simply go with the number of people who use the tag “atheist”, then only 3.1 percent do that, and some of those that did, do in reality actually believe and so are not atheists at all.

So we learn several things here

Next time you hear somebody advise you that the number of atheists within the US is just 3.1%, then you can mentally triple that number to get something that is a bit more accurate.

The full 2014 survey results may be found here.