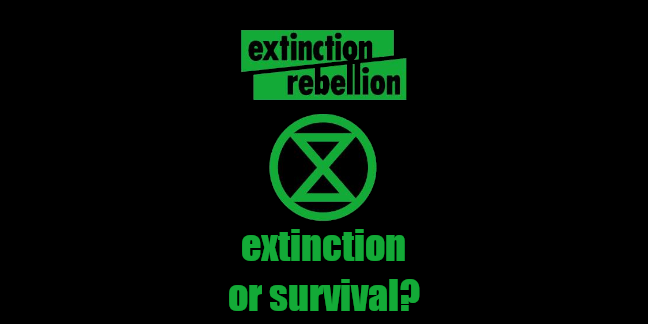 In the face of the overwhelming scientific evidence, a new international social movement called Extinction Rebellion has emerged.

Their goal is zero carbon emissions by 2025, and that is just 7 years away. The strategy is not to simply ask or propose, but to actively engage in non-violent protest and disruption. Since the founding of this group just two months ago in Oct 2018 when 1,000 activists rallied in parliament square and hear the “Declaration of Rebellion” against the UK government, has anything been happening?

That all leads to a few rather obvious questions.

Is this just a UK thing?

No, Extinction Rebellion events are planned in 27 other countries including Ireland, Australia, Canada, France, Sweden, Germany, Colombia and the United States.

But you get arrested for doing stuff like that … right?

Yep, that’s the idea. Large numbers of activists have pledged to be arrested and are prepared to go to prison.

The inspiration is obvious. Past non-violent protest movements have include Gandhi’s independence movement, the Suffragettes, and Martin Luther King. At the time the authorities did oppose them, and the public might have been annoyed by some disruption, but the longer view grants them as being the holders of the high moral ground.

Change often happens because of disruption, and not simply because there is a social decision to do so.

So these are just a few unemployed yobs with nothing better to do .. right?

Actually no. hundreds of academics including folks such as Rowan Williams, Noam Chomsky, Philip Pullman, Caroline Lucas, and A. C. Grayling, and many more have signed up.

Are the Gatwick Drones these folks?

Will the BBC be reporting on their activities? I suspect the latest protest on 21st Dec just might have attracted their attention …

On 26 October 2018, about one hundred academics signed a call to action …

We are in the midst of the sixth mass extinction, with about 200 species becoming extinct each day. Humans cannot continue to violate the fundamental laws of nature or of science with impunity. If we continue on our current path, the future for our species is bleak.

When a government wilfully abrogates its responsibility to protect its citizens from harm and to secure the future for generations to come, it has failed in its most essential duty of stewardship. The “social contract” has been broken, and it is therefore not only our right, but our moral duty to bypass the government’s inaction and flagrant dereliction of duty, and to rebel to defend life itself.

We therefore declare our support for Extinction Rebellion, launching on 31 October 2018. We fully stand behind the demands for the government to tell the hard truth to its citizens. We call for a Citizens’ Assembly to work with scientists on the basis of the extant evidence and in accordance with the precautionary principle, to urgently develop a credible plan for rapid total decarbonisation of the economy.

Now go see the list of those that signed that.

On 9 December 2018, a second open letter of support was published …

In our complex, interdependent global ecosystem, life is dying, with species extinction accelerating. The climate crisis is worsening much faster than previously predicted. Every single day 200 species are becoming extinct. This desperate situation can’t continue.

With extreme weather already hitting food production, we demand that governments act now to avoid any risk of hunger, with emergency investment in agro-ecological extreme-weather-resistant food production. We also call for an urgent summit on saving the Arctic icecap, to slow weather disruption of our harvests.

We further call on concerned global citizens to rise up and organise against current complacency in their particular contexts, including indigenous people’s rights advocacy, decolonisation and reparatory justice – so joining the global movement that’s now rebelling against extinction (eg Extinction Rebellion in the UK).

We must collectively do whatever’s necessary non-violently, to persuade politicians and business leaders to relinquish their complacency and denial. Their “business as usual” is no longer an option. Global citizens will no longer put up with this failure of our planetary duty….

Now go see who signed this one.

Is Human Extinction a real possibility?

If indeed Extinction is even a remote possibility, then rather obviously these folks have the moral high ground. So what does the scientific evidence tell us?

Here is an article that contains the views of other activists concerning Extinction Rebellion.

Extinction Rebellion – in or out?

Inspirational to some, apocalyptic to others. Five climate-concerned campaigners offer their take on Extinction Rebellion