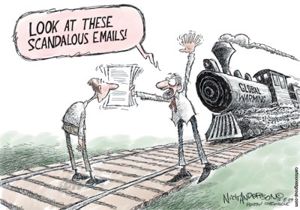 It has been 10 years since the supposed Climategate scandal. What happened, what is the story of Climategate really all about?

In November 2009, a server at the Climatic Research Unit (CRU) at the University of East Anglia (UEA) was hacked and thousands of their internal emails were stolen and distributed. These were then dishonestly quote-mined by climate denialists. The “evidence” within these emails supposedly “proved” that staff at the CRU had deliberately manipulated data to fake climate change and that there was some grand climate conspiracy.

Initially leading the charge was pseudo journalist James Delingpole who perhaps coined the term “Climategate”. He claimed that is was “the greatest scientific scandal in the history of the world“.
There was indeed a scandal. The nefarious plot here is that the claims regarding all of this were complete BS.

Let’s dig into how we know this.

As many as eight separate committees ran investigations. None of them, not one, found any evidence of fraud or scientific misconduct.

The eight major investigations were these (with links to details) …

It total there are about 1,000 emails and 2,000 documents. They cover the period 1996 to 2009. The emails contain discussion on how to best combat the arguments of climate change sceptics, unflattering comments about sceptics, queries from journalists, and drafts of scientific papers.

But what about “Mike’s Nature Trick”?

As has been explained all over the place …

Many commentators quoted one email in which Phil Jones said that he had used “Mike’s Nature trick” in a 1999 graph for the World Meteorological Organization “to hide the decline” in proxy temperatures derived from tree-ring analyses when measured temperatures were actually rising. This “decline” referred to the well-discussed tree-ring divergence problem, but these two phrases were taken out of context by global warming sceptics, including US Senator Jim Inhofe and former Governor of Alaska Sarah Palin

It turns out that “Mike’s nature Trick” is not a reference to some deliberate massaging of data to align with a specific agenda, but rather is normal scientific or mathematical jargon that encapsulates a neat way of handling data. In this instance it was a reference to a statistical method used to bring two or more different kinds of data sets together in a legitimate fashion

10 Years later – what do we learn by looking back?

The UK’s Guardian has published a review of it all. Published on 9th Nov 2019 and titled “Climategate 10 years on: what lessons have we learned?“.

It opens with the quite frankly appalling targeting of Professor Phil Jones, and remember this was all the result of completely bogus claims …

…The email that appeared on Phil Jones’s computer screen in November 2009 was succinct. “Just a quick note to encourage you to shoot yourself in the head,” it said. “Don’t waste any more time. Do it today. It is truly the greatest contribution to mankind that you will ever make.”

Nor was it very different from the other emails that were arriving in Jones’s inbox. Others described the climate scientist as the scum of the earth. Some authors promised to kill him themselves. Most of the messages were riddled with obscenities…..

… Jones was vilified. “Within a day or two reporters were outside my house, knocking on my neighbours’ doors, digging for dirt,” he recalls. “I got hundreds of abusive and threatening emails. I knew the accusations were nonsense. But as someone used to being in control I buckled at the loss of it. My health deteriorated. I found it difficult to sleep and eat. I was under intense, spiralling pressure and felt I was falling to pieces….

Those who actually read all the leaked documentation have a few good observations.

Guardian writer Fred Pearce who extensively studied the leaked emails and produced a book, The Climate Files, from his research sums it all up as follows …

“Have the Climategate revelations undermined the case that we are experiencing man-made climate change? Absolutely not“

“Nothing uncovered in the emails destroys the argument that humans are warming the planet.”

“Scratch and sniff as we did, there was no smoking gun, no line that would show that there had been a conspiracy to fabricate a great untruth,”

“British climate science was subjected to huge scrutiny by the world’s best journalists and it stood up to the test.”

Associated with all of this are valid accusations of ‘falsification’ and ‘manipulation’. These however are not directed against the climate scientists, but instead against the deniers who attempted to fraudulently and deliberately manufacture a fake news scandal.

Is the CRU data dubious?

Other powerful support was provided by physicists at University of California, Berkeley, who decided to test if deniers had been right to question Jones’s temperature charts. Led by Professor Richard Muller and backed by funds that included a $150,000 grant from noted climate-crisis denial supporters, the Charles Koch Foundation – the team re-analysed more than 1.6bn land temperature measurements dating back to the 1800s – and came to exactly the same conclusions as Jones: the fairly level temperatures that had continued through the past few centuries began to spike sharply a few decades ago as atmosphere carbon levels rose.

“Our biggest surprise was that the new results agreed so closely with warming values published previously,” said Muller. “This confirms these studies were done carefully and that potential biases identified by climate-change sceptics did not seriously affect their conclusions.”

Of note is the observation that Richard Muller started out as a Climate Skeptic. Doing this study changed his mind …

When we began our study, we felt that skeptics had raised legitimate issues, and we didn’t know what we’d find. Our results turned out to be close to those published by prior groups. We think that means that those groups had truly been very careful in their work, despite their inability to convince some skeptics of that. They managed to avoid bias in their data selection, homogenization and other corrections.

In the end this very robustly nails it. This completely independent reanalysis from scratch wholly validated the work of the CRU.

Climategate as an idea might persist in the minds of some, but the claim that it was a scandal has been well and truly busted.

Check out the BBC Four documentary, Climategate: Science of a Scandal. It is due to be broadcast on BBC Four on 14th Nov at 21:00