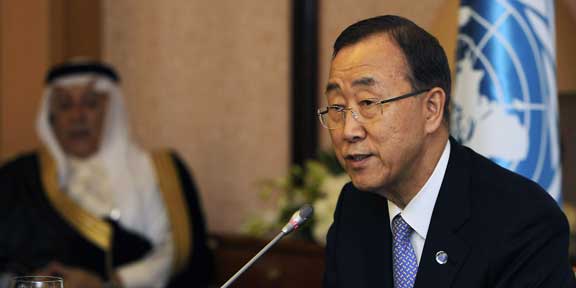 This is a story from last June, so it is not a new event. I would however like to highlight it because it is an important issue, and I’m also prompted to write about it because right now the 71st Session of the UN General Assembly is taking place.

Back last June Ban Ki-Moon stood up before the press to explain why he had removed Saudi Arabia from its annual UN register of children’s rights violators. In his own words, the step to doing this was …

“one of the most painful and difficult decisions”

In fact, here is the Video of that event …

and people still look to the UN as a moral arbiter. Such a silly institution

Giving in to blackmail, Moon should be sacked if he doesn’t boot the horrible House of Saud out of any position and make them like north korea.

After his confession Ban Ki Moon should step down as UN secretary General.

… and yet I can’t help but be personally sympathetic to some degree with Mr Ki-Moon. The entire UN was blackmailed, and the choice he was faced with was clearly one of “dammed if you do vs dammed if your don’t”.

What basically happened is that Saudi Arabia along with its coalition partners (UAE, Bahrain, Kuwait, Qatar, Egypt, Jordan, Morocco, Senegal and Sudan) threatened to cut off crucial funding to the world body if Saudi Arabia was not removed from the annual Children and Armed Conflict report.

The appendix is supposed to list all nations that have violated the rights of children during the proceeding year and so it included Saudi Arabia. That was specifically because during their war of aggression with Yemen, hundreds of children (and many other civilians) had been killed.

The decision taken by Mr Ki-Moon was quite smart. He falls in line with the Saudi Arabian demands, and removes them from the Appendix. Then he adds formal documentation on the UN website specifying that he had to do this …

… and published both of these on the UN website with a caption explaining that Saudi Arabia has been removed.

Finally, just to make sure that the world gets the message, he holds a press conference announcing all of this.

So basically the Saudi effort to purge all references to themselves from the report completely backfired because Mr Ki-Moon has now made quite sure that everybody knows what happened.

It is distinctly possible that you would have never known that Saudi Arabia was mentioned in the appendix of this report because nobody really reads them except perhaps press reporters looking for a story angle and human rights groups. However, because the Saudi’s blackmailed the UN and now think that they succeeded, they have in effect utterly failed.

In other words, while some might consider the UN bending to the Saudi will like this to be a UN fail, it is actually the opposite, and was a smart move by Mr Ki-Moon who completely out manoeuvred them.

Finally, just for completeness, here is the original Yemen section that contained the references to Saudi Arabia …

164. The conflict in Yemen escalated significantly following the takeover of Sana’a by the Houthis in September 2014 and the beginning of air strikes by the coalition led by Saudi Arabia on 26 March 2015. Intensive aerial bombardment was followed by ground fighting, taking a devastating toll on the civilian population. Grave violations against children increased dramatically as a result of the escalating conflict.

165. The United Nations documented a fivefold increase in cases of recruitment and use of children by armed groups, in particular following the escalation of 26 March, notwithstanding the challenges in verifying cases owing to security and access constraints. Of the 762 verified cases of recruitment of children (all boys), the majority were attributed to the Houthis (72 per cent), followed by the pro-Government popular committees (15 per cent) and Al-Qaida in the Arabian Peninsula (9 per cent). Recruitment was predominant in Houthi strongholds, such as Amanat al-Asimah (103), Ta‘izz (69) and Amran (34). A shift was observed from largely voluntary enlistment towards forced or involuntary recruitment through coercion, including through the provision of misleading information or incentives.

167. The United Nations verified a sixfold increase in the number of children killed and maimed compared with 2014, totalling 1,953 child casualties (785 children killed and 1,168 injured). More than 70 per cent were boys. Of the casualties, 60 per cent (510 deaths and 667 injuries) were attributed to the Saudi Arabia-led coalition and 20 per cent (142 deaths and 247 injuries) to the Houthis. In 324 incidents, the responsible party could not be identified. ISIL claimed responsibility for an improvised explosive device attack on a mosque in Amanat al-Asimah that killed seven children and injured six, in addition to causing many adult casualties. Of the child casualties, 60 per cent were caused by air strikes, predominantly in Amanat al-Asimah, Hajjah and Sa‘dah. Significant civilian casualties, including children, as a result of air strikes continued to be documented early in 2016. Ground fighting accounted for 29 per cent of child casualties, with the vast majority in Ta‘izz, Aden and Dali‘. Child casualties as a result of landmines and explosive remnants of war were documented, with 15 children killed and 67 injured in Abyan, Aden, Amanat al-Asimah, Amran, Bayda’, Dali‘, Dhamar, Lahij, Ma’rib, Sa‘dah, Shabwah and Ta‘izz.

168. The United Nations verified an incident of sexual violence against a child by a member of an armed group. However, it is likely that this category of violation is underreported.

169. The United Nations verified 101 incidents of attacks on schools and hospitals, which is double the number of incidents verified in 2014. Of the attacks, 90 per cent caused the partial or complete destruction of schools or health facilities, while the remaining 10 per cent involved attacks on protected personnel, including students. Of the attacks on schools and hospitals, 48 per cent were attributed to the coalition, 29 per cent to the Houthis and 20 per cent to unidentified perpetrators. More than half of the violations occurred in the period from April to June.

170. Fifty-nine incidents of attacks on 34 hospitals were verified, with multiple attacks on the same facilities, especially in Aden and Ta‘izz. In Aden, six facilities were attacked 10 times. In Ta‘izz, three health facilities were hit in 23 separate incidents. The majority of repeated attacks were attributed to Houthi forces. For example, the Jumhuriah hospital in Aden was attacked three times by the Houthis in April. In addition, coalition air strikes destroyed 15 health facilities in the governorate of Sa‘dah.

172. The United Nations verified 51 incidents of military use of schools, of which the large majority (44) took place in Ta’izz by Houthi forces (20), popular committees (8) and unknown armed groups (16). The Houthis also used schools in Aden, Dali‘ and Lahij, and two incidents were attributed to popular committees in Aden and unknown armed groups in Ibb. Four incidents of military use of hospitals were verified, of which three were attributed to the Houthis and one to Al-Qaida in the Arabian Peninsula.

173. The United Nations verified the abductions of 11 children, all of which were attributed to the Houthis, with the exception of a case attributed to Al-Qaida in the Arabian Peninsula. For example, two children were abducted next to Houthi barracks in Dali‘. The Houthis and affiliated groups requested a ransom for the return of the children to the families, but the children were later killed.

174. Humanitarian access was severely restricted, with both the coalition and the Houthis imposing obstacles to the delivery of goods and services. The United Nations verified 16 incidents of denial of humanitarian access in Ta‘izz, Sa‘dah, Aden and Dali‘, mostly relating to the restriction of entry of humanitarian personnel, and threats and violence against personnel. The majority of verified incidents were attributed to the Houthis (11) and the coalition (3).

175. In May 2014, the Government signed an action plan to end and prevent the recruitment and use of children. However, implementation did not advance in the light of the escalation of conflict. My Special Representative engaged in dialogue with the Government, Member States and subsidiary bodies of the Security Council to raise serious concerns about the devastating impact of the conflict on children. I call upon all parties to respect their international legal obligations to protect civilians and civilian infrastructure, and encourage the inclusion of child protection concerns in negotiations to end the conflict.