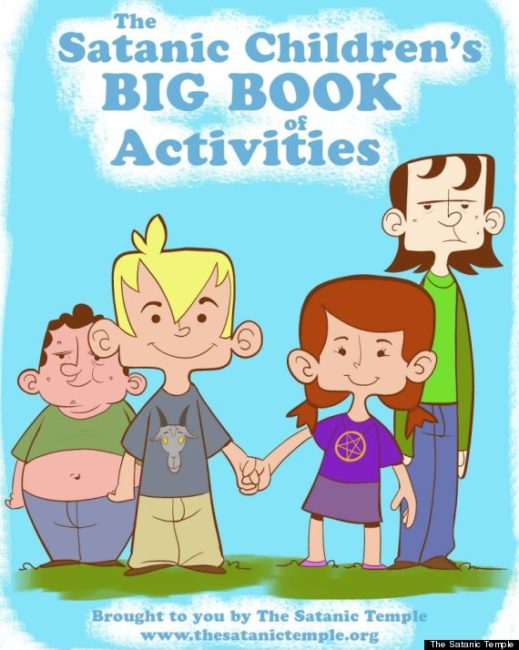 There have been reports that the Satanic Temple will soon be setting up After School clubs, so is there any truth to this or have you just tripped over a bit of summer season silliness churned out by a hack while the real journalists are away on vacation?

It is also the sort of story that can perhaps cause many a Christian head to almost literally explode.

Yes, it really is true …

The Satanic Temple is seeking to place its newly created after-school program called “After School Satan” in places of education across the country, and a Los Angeles-area elementary school is one of its early targets.

They even have a video promoting this new program …

Yes it is a really creepy scary clip and even has kids getting off the school bus backwards, but that is by design, the aim is to troll and provoke.

This is not what you think it is

I’ve recently written about the Satanic Temple and so if you have read that, you will know that the Satanic Temple, despite the scary sounding name, is not actually a religious group at all. It is a political group that utilises a religious facade in order to promote a specific and rather important constitutional position, namely the promotion of secularism.

Most seeing the press release perhaps don’t get as far as actually reading the details, but instead fall upon the floor foaming and writhing. If however the temptation to revet to possessed mode is resisted and you read on, then the secular point being established becomes abundantly transparent …

The Satanic Temple this weekend unveiled plans for a network of after-school programs that focus not on worship of the Devil, but “critical reasoning, independent-thinking, fun, and free thought,” according to the Satanic Temple’s website.

The group says it hopes to counter the influence of Christian after-school programs, such as Good News Clubs, that have popped up at schools in the wake of a 2001 U.S. Supreme Court ruling that paved the way for religious organizations to establish after-school activities at public school facilities.

… “Once religion invades schools, as The Good News Clubs have, the Satanic Temple will fight to ensure that plurality and true religious liberty are respected,” the said in a statement on its website.

“Twisted Evangelical teachings of The Good News Clubs robs children of the innocence and enjoyment of childhood, replacing them with a negative self image, preoccupation with sin, fear of Hell, and aversion to critical thinking,” the group added.

Issuing a press release that simply criticises religious groups for running religious clubs within the context of state sponsored educational establishments can more or less be guaranteed to not only induce a yawn but to also motivate its rapid filing within the round circular filing cabinet  that hungrily waits for feeding time in the corner of every editors office.

This Satanic After School club initiative however does exactly what it is designed to do, and so this truly epic troll provokes what can best be described as a bit of a media feeding frenzy.

The point is indeed well made, if you want religion involved in public state funded education, then you either permit all beliefs, and that includes this one, or more correctly, remain constitutional, go neutral, and have none at all. To drive that point home the Satanic Temple was established to basically troll the religious into the realisation that it is indeed all beliefs or none. If religious groups insist on distributing bibles in schools then they will find the Satanic temple turning up to distribute Satanic colouring books (I’m not kidding about that), or in this case, if they want to run religious after-school clubs, then the Satanic Temple will also now roll up to run Satanic after school clubs.

Those who deeply desire bible distribution and religious clubs in public schools in order to indoctrinate, or 10 commandment monuments erected in public courts, usually ride into town under a banner that proclaims “Religious Freedom”. The problem with such a mindset is that the term “Religious Freedom” does not actually mean what they think it means. When faced with a belief that they do not hold, then this desire for “religious freedom” rapidly evaporates.

If they truly do what to jump into state funded schools to promote religion, then they will also find that they get this as well. It hopefully becomes a light-bulb moment that then enables them to grasp that their call for “religious freedom” leads to undesirable consequences. Secularism, total state neutrality, really is the best option. The alternative, an official state sponsored belief, has consequences. The end-game there is always intolerance and oppression of anybody who does not embrace the state endorsed official belief.