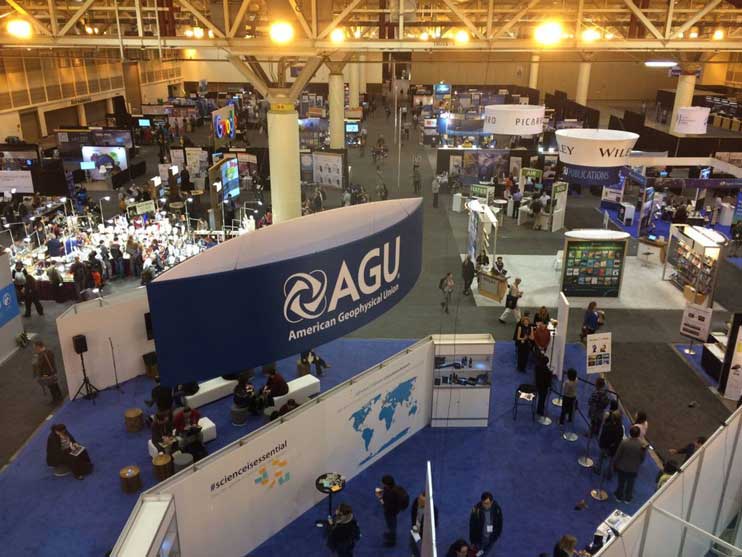 Once a year the Comic-Con of the Earth, space and climate sciences holds a meeting, and in 2017 it was in New Orleans. This is the annual meeting of the American Geophysical Union. As a result Reporters will inevitably suffer the horrendous stress of being sent to hang out in New Orleans for the weekend (oh the pain), and just might attend some of the sessions as well so that they have enough fodder for a story. Well yes, that last bit is the cynic within up surfacing. Actually to be wholly fair, the article within the Washington Post by Sara Kaplan (who also took the picture above), is quite good and has a focus on the activism that was inevitably bubbling away under the surface …

“I’m going to start with some protest 101,” Lee Rowland told the few dozen scientists who filled the windowless meeting room. “You know, basic rules for making sure if you go out and protest, you don’t get arrested.”

Audience members shifted in their seats. They included experts in Martian landscape evolution and glacier melting rates. For many, this information was new.

… and we all perhaps know exactly what is driving this …

… this is 2017. The president has proposed a budget that include massive cuts to science agencies. The head of the Environmental Protection Agency has advocated for a “red team/blue team” debate on climate change science. In April, tens of thousands of people took to the streets in a “March for Science,” chanting slogans like “science cures alternative facts.”

For some AGU attendees this year, activism is on the agenda.

Activism as an agenda item is not just a metaphor

Sara’s observation within her article is that activism is quite literally on the agenda. One session that she writes about was entitled “Legal Advice for Scientists Interested in Activism”, and this is clearly something quite new for many …

Lauren Kurtz, an attorney with the Climate Science Legal Defense Fund, said she suggested it after working with organizers of the March for Science — most of whom were researchers with no previous activism experience.

As for the advice and guidance being given out, well that was very practical and pragmatic …

During her presentation, Kurtz ticked off a few examples of activism don’ts: Don’t use a public university emails to draft open letters on political issues — because they are considered government records, such emails are subject to open records requests and can be sought by outside groups to harass researchers they disagree with. Don’t wear your NASA apparel to the March for Science or invite colleagues to a protest at the end of the weekly faculty meeting — such activities could run afoul of anti-lobbying restrictions or workplace policies.

That’s fine, but it appears to assume that doing science is like any other 9-to-5 and it is not …

A young man in the back of the room raised his hand. “You guys talked a lot about not doing activism activities ‘on the clock,’ ” he said, putting air quotes around the last three words. “I feel like in science there is no clock.” Several people laughed, undoubtedly recalling long nights spent running experiments and drafting research papers.

But the attorneys were serious. “If it has to wait till you get home at 2 a.m. to send that email, that’s what you have to do,” said Rowland, who works for the American Civil Liberties Union.

There is much more in that article

Sarah Kaplan earned her trip to New Orleans, it really is worth a read.

Other agenda items included updates on science policy, and also discussion regarding threats to scientists’ independence, a workshop on how to visit legislators, and a “call-a-thon” to members of Congress. There was also a good focus on how to communicate with the public.

While this is all in some respects new, it is also wholly predictable.

“What we’re seeing again this year at the meeting is fear and anxiety, inside and outside the U.S.” – AGU  Executive Director Christine McEntee.

The comments under that article, well at least one of them, perhaps encapsulates the era we now live in …

Science and politics are unsettled, ever changing, like the climate. There would be better science if the worldview of scientists was through the lens of the Bible.

I would like to think that the commenter was simply making a joke about the current political climate, but sadly I suspect he might actually have been wholly serious.

The following AGU 2017 press releases were issued during the meeting