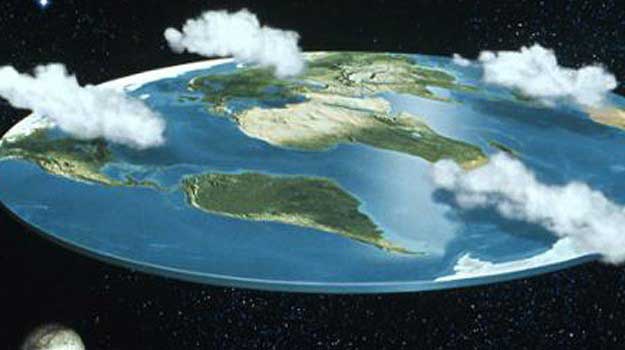 Yes, you read that correctly, somebody actually ran a conference in the UK dedicated to the idea of a flat earth. For them I guess Terry Pratchett’s discworld is an encyclopaedia of facts.

Michael Marchall, the project director of the Good Thinking Society, decided to take a hit for the team. He signed up and then went along. What he encountered has now been published in the Guardian.

The universe is an egg and the moon isn’t real: notes from a Flat Earth conference

There was the three-hour presentation which contended that the universe is a giant egg. There was the Manchester musician who posited that the Earth is the shape of a diamond. And another who believes that the moon is a projection.

Welcome to the Flat Earth UK Convention, a raucous departure from scientific norms where people are free to believe literally anything.

I’ll not reproduce the entire article. Instead there are a few questions to ponder over and so I’ll pop them down here and see if Marsh gleaned any insights that might help answer them.

They don’t actually believe this do they, it is all just a laugh and a joke … right?

Nope. Sadly, this is a core group that truly do believe it. While there was no general consensus on what they do believe, there was this one idea that they were all in orbit around …

That unshakeable belief is one of the few points of total agreement for the 200-strong audience at this week’s gathering. There is less consensus, however, on what form the Earth actually takes: some believe it to be a disc with the Arctic circle in the middle; some believe that circle is under a dome, above which there may or may not be an expanse of water; others believe the Earth is just one in a series of ponds in a vast expanse of ice; and other still believe the Earth exists beneath four cosmic rings within a giant egg-shaped universe.

… and as Marsh observed, they were deeply convincing about how committed they were to the idea …

if there were disbelievers among the 200 attendees at the conference, they were exceptionally convincing; there seems little doubt over the sincerity of modern Flat Earth proponents.

Do these folks hold other odd beliefs?

It’s a general observation that people who hold odd beliefs tend not to embrace just one whacky idea, but instead often buy into every bit of crazy eccentricity that life tosses in their direction. This conference was not an exception to that observation …

Several speakers throughout the weekend take time to highlight that evolution is a myth, accompanied by occasional heckles of “monkey men!” from audience members.

… and so, without much pause, there goes one of the foundations of modern biology. It’s understandable. If physics can be so easily dismissed, then why not add biology into the mix.

They can’t be very smart … right?

I'd say the main thing I learned from being at the whole weekend was that it's not about stupidity, there's a lot else going on. Smart people with a blind spot, people who have had traumatic experiences or even mental health issues, lost people looking for a welcoming community.

The conference also yielded this gem ….

Nesbitt shared what he called the “Flat Earth Addiction” test – seven questions Flat Earth proponents should ask themselves, including “Have people said that you are pushy or obsessive about Flat Earth?”, “Have you thought that if only everyone knew about Flat Earth the world would be a different place?”, and “Have you noticed that you spend less and less time with your family and friends and more and more time talking to Flat Earthers?”.

Looking around the room, I could see knowing nods, as people recognised themselves in each question. The questions, Nesbitt explained, were taken from a checklist used to determine whether someone is in a cult. The implication seemed lost on the audience.

Go read the full article. I highly recommend it.

In this feature-length special episode, Alice and Marsh talk about what happened when they attended the Flat Earth Convention in Birmingham, and why scientists should play more Pac-Man.https://t.co/xdAA4umHmj

…This was something of a reoccurring theme throughout the weekend, and was especially apparent when four flat-Earthers debated three physics PhD students. A particular point of contention occurred when one of the physicists pleaded with the audience to avoid trusting YouTube and bloggers. The audience and the panel of flat-Earthers took exception to this, noting that “now we’ve got the Internet and mass communication … we’re not reliant on what the mainstream are telling us in newspapers, we can decide for ourselves.”

I’m not really interested in discussing if the Earth if flat or not(for the record, I’m happily a “globe-Earther”)—and I’m not seeking to mock or denigrate this community. What’s important here is not necessarily whether anyone believes the Earth is flat or not, but instead what the flat-Earthers’ resurgence and public conventions tell us about science and knowledge in the 21st century.

With that thought in mind, his article is also well worth a read.

Akshat Rathi also reported about the conference on Quartz, He interviewed Harry Dyer, the author of the above article. As a point of even more insights, it is also worth reading.

Finally, I’ll also point to Kat Eschner who wrote about it all in Popular Science….

Beliefs like these ignore numerous observable physical processes that wouldn’t be possible on a flat world, Krippner says. From weather to currents in the ocean and the movement of the tectonic plates that she studies, there’s a lot there. Understanding it just takes a little more than standing outside and staring at the seemingly flat horizon.

The Earth really is a globe … right?

This is a not a matter of faith, you can test this yourself. Via Popular Science …