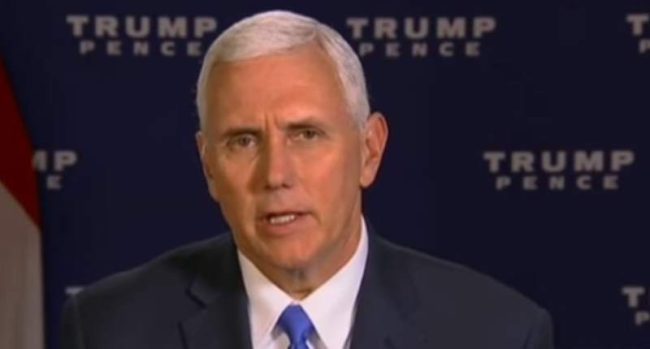 Let me start by putting my cards on the table here – I’m not a Mike Pence supporter.

While writing about how his appearance in the audience at the Hamilton musical resulted him him being booed, I came across one commenter who suggested that booing him was wholly appropriate because he wants to literally electrocute gay people back into straightness.

I do get it. Somebody with his homophobic reputation turning up at a musical theatre venue is not exactly going into a meeting of his fan club.

While he is indeed very much opposed to LGBT rights, that specific electric shock claim is not factual.

Let me emphasise that, with a link here to a fact check …

WHAT’S TRUE: Mike Pence once supported the use of federal funding to treat people “seeking to change their sexual behavior.”

WHAT’S FALSE: Pence never stated that he supported the use of electric shocks or “gay conversion” therapy.

So what, he is still an Anti-LGBT bigot

The key point is this – facts matter.

Hillary Clinton was demonised via a constant stream of political myths that were quite frankly complete bullshit. Much of that was picked up by many and promoted as fact. Given the narrow margins it would be foolish to dismiss it as a decisive factor that has now resulted in #trumpageddon.

If we wish to take a stance for truth and facts, then it becomes rather important to avoid promoting myths in order to discredit Trump and his hand-picked band of lunatics. We don’t actually need to utilise myths at all, the plain facts are just fine.

Being Fooled is easy

I truly do understand how easy it is to get fooled by such mythology. I’ve been aware that Mr Pence was indeed opposed to LGBT rights for quite some time, hence I immediately latched on to the “electric shock” and accepted it as true when I first read it. My own bias was clearly in play. If I had not been writing about what happened at the Hamilton musical then it is distinctly possible that I would not have fact-checked, would in all probability be still accepting it as true, and even mentioning it as a “fact” in any conversations.

So what is the precise stance towards LGBT rights taken by Mr Pence?

It is wise to question everything, and that includes the things I initially believed to be true.

I truly do need to examine what his precise LGBT stance is. It’s not hard to discover because it is all in the public record and well-cited on his wikipedia page …

Pence has been a staunch opponent of efforts to expand LGBT civil rights. In 2000, Pence stated “Congress should oppose any effort to recognize homosexuals as a ‘discrete and insular minority‘ entitled to the protection of anti-discrimination laws similar to those extended to women and ethnic minorities.”[151] He called for “an audit to ensure that federal dollars were no longer being given to organizations that celebrate and encourage the types of behaviors that facilitate the spreading of the HIV virus” and instead advocated for resources to be directed toward conversion therapy programs, “[for] those seeking to change their sexual behavior.”[152][153][154][155] Pence has said that homosexuals should not serve in the military, saying, “Homosexuality is incompatible with military service because the presence of homosexuals in the ranks weakens unit cohesion.”[156] Pence opposed the repeal of don’t ask, don’t tell, saying in 2010 that allowing gays and lesbians to openly serve in the military would “have an impact on unit cohesion.”[156][157] In 2007, Pence voted against the Employment Non-Discrimination Act, which would have banned workplace discrimination on the basis of sexual orientation.[158] Pence opposed the 2009 Matthew Shepard Hate Crimes Act,[159] saying that Barack Obama wanted to “advance a radical social agenda”[160] and said that pastors “could be charged or be subject to intimidation for simply expressing a Biblical worldview on the issue of homosexual behavior.”[161] Pence opposes both same-sex marriage and civil unions.[162] While in the House, he said that “societal collapse was always brought about following an advent of the deterioration of marriage and family”.[163] He has advocated a constitutional same-sex marriage ban but did not champion such a proposed ban for his first year as governor.[164]

So yes … he is indeed not an LGBT fan. Yes, I’m bing polite, and yes he truly does not deserve such politeness, the booing is wholly warranted and justifiable.

If you wish to understand people, look beyond what that say to what they actually do. Past behaviour is a strong pointer towards future behaviour. Given his actions as Governor of Indiana, the concerns, and booing, being expressed are indeed empirically justified.

We don’t need electric shock myths to discredit him, his own policy record and past behaviour in office is wholly sufficient.