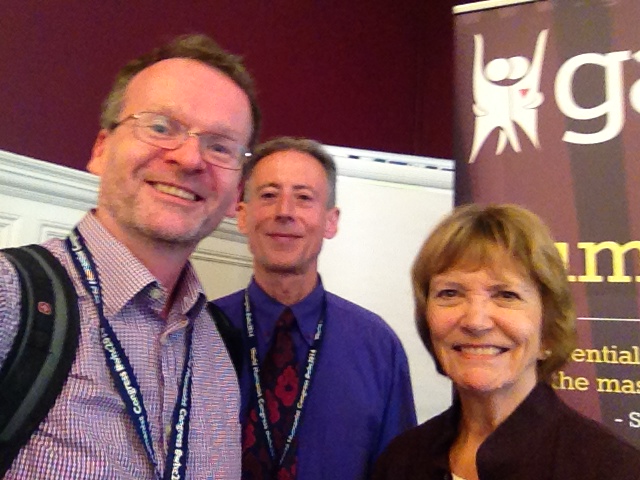 As you might (or might not) know, I’m currently attending the World Humanist Congress in Oxford, and so as a result I’ve had the opportunity to meet some really truly amazing individuals.

Pictured above between myself and Joan Bakewell is Peter Tatchell

He is one truly amazing individual who has successfully campaigned over many decades and made a real difference, you can find out about some of all that here at this link.

There are brutal dictators in this world who do great harm to millions such Mugabe in Zimbabwe, and Peter is famous for his interactions with him.

One story is that he passed through police security disguised as a TV cameraman to quiz Mugabe during the “Africa at 40” conference at Central Hall, Westminster. Mugabe told him that allegations of human rights abuses were grossly exaggerated; he became agitated when Tatchell told him that he was gay. Mugabe’s minders summonedSpecial Branch guards, who ejected Tatchell. On 26 October 1997 a letter from Tatchell to The Observer argued that the United Kingdom should suspend aid to Zimbabwe because of itsviolence against homosexuals.

The well-known story happened in October 1999 when Tatchell and three other OutRage! activists approached Mugabe’s car in a London street and attempted to perform a citizen’s arrest. Tatchell opened the car door and grabbed Mugabe. He then called the police. Sadly, the four OutRage! activists were arrested, on charges including criminal damage, assault and breach of the peace; charges were dropped on the opening day of their trial.

Another rather famous interaction was in March 2001 when he heard Mugabe was about to visit Brussels, so he went there and attempted a second citizen’s arrest. Mugabe’s bodyguards were seen knocking him to the floor. Later that day, Tatchell was briefly knocked unconscious by Mugabe’s bodyguards and was left with permanent damage to his right eye.

He ultimately failed in his attempt to secure an international arrest warrant against Mugabe on torture charges. The magistrate argued that Mugabe had immunity from prosecution as a serving head of state, but this one lone individual stood up against a brutal dictator when nobody else would.

He is indeed truly a hero for our times and it was a deep honour to have met him.